Eviction fears easing for some Tri-State renters during COVID-19 crisis, intensifying for others

'You can still evict families' 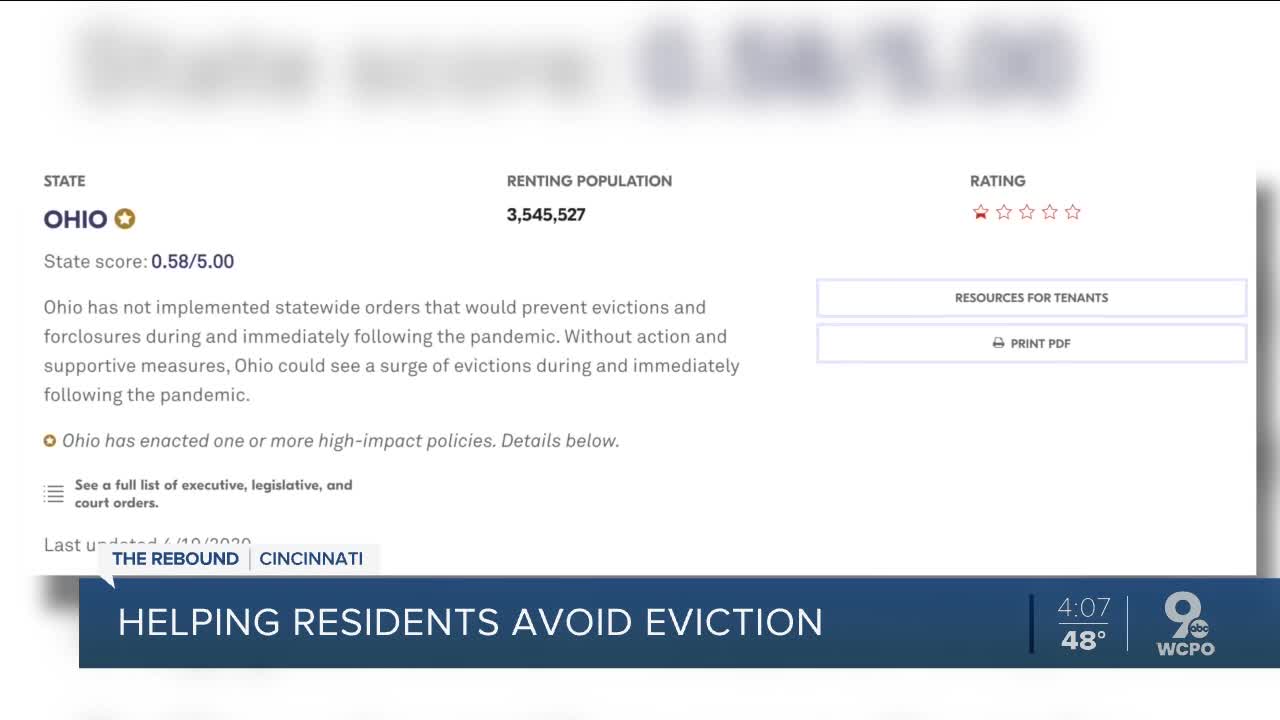 A national COVID-19 Housing Policy Scorecard warns that Ohio, Kentucky and Indiana all could see a surge in evictions immediately following the pandemic unless more is done.

CINCINNATI — After weeks of worry, things are looking up for Brittney Bolden.

She got a stimulus check April 9, and her unemployment benefits finally started March 14, almost exactly a month after she had filed. She has even started getting the extra $600 per week provided by the federal CARES Act.

“It’s made a huge difference actually,” she said. “I was able to pay my rent already two months in advance just in case things don’t work out.”

RELATED: Renters across the Tri-State worry about evictions during COVID-19 crisis

Bolden has gotten caught up on all her bills, she said, and is even bringing home a bit more money now than she did when she was working as a server and bartender at the 21C Museum Hotel Downtown. Bolden said she considers herself “extremely blessed.”

But she knows it’s not that way for everyone.

“I know a lot of people are still waiting on their stimulus checks, and landlords here are still handing out eviction notices,” she said. “I’m thinking once this crisis dies down a bit, there will be an even bigger crisis as far as housing goes.”

That’s a concern felt across the region.

Many renters in Greater Cincinnati still are struggling to pay April’s rent, even as the May payment comes due, said Nick DiNardo, managing attorney for the housing and consumer practice group at the Legal Aid Society of Southwest Ohio LLC. Even with all the measures Ohio, Kentucky and Indiana have put in place to ease the economic pain of the crisis, renters still must pay their rent to avoid eviction, he said.

Legal Aid has access to limited funding to help people who have fallen behind and hopes to begin distributing that money soon, he said.

RELATED: Can't pay your May bills? What options you have

“The people who are behind in April rent, we’re going to try to get them assistance, we’re going to get landlords to agree not to file evictions or to dismiss the evictions if one’s already been filed for those folks,” DiNardo said. “Hopefully they can find a source for their May rent. If they can’t then we’re going to evaluate that second week of May and start doing it again.”

DiNardo said he fears courts across the region will be overwhelmed with eviction hearings once they reopen.

Officials in Ohio, Kentucky and Indiana all have taken steps to try to slow the pace of evictions in the wake of the economic shockwaves the new coronavirus has created. The idea was to buy tenants some time to begin to get unemployment benefits and stimulus checks.

But a national COVID-19 Housing Policy Scorecard has warned that each of the three states could see a surge in evictions immediately following the pandemic unless more is done.

‘You can still evict families’

Kentucky fared best out of the three states on the COVID-19 Housing Policy Scorecard, developed by the Eviction Lab at Princeton University and Emily Benfer of Columbia Law School. The scorecard gave Kentucky 2.65 out of five stars for its policies as of April 29, and it tied for 15th in the nation.

“Kentucky’s governor has directed law enforcement to not carry out evictions and foreclosures during the state of emergency, and the court system has also taken action to suspend eviction cases and prevent new filings,” the scorecard states. “However, without action on rental debt, Kentucky could still see a surge of evictions soon after the state of emergency expires.”

Indiana got only 0.65 out of a possible five and ranked 31st nationwide in the scorecard’s evaluation.

“The governor of Indiana has suspended the initiation of eviction. However, the Indiana Supreme Court is still accepting eviction filings,” the scorecard states. “Without further action to suspend eviction cases and to provide supportive measures to address rental debt, Indiana could see a surge of evictions immediately following the pandemic.”

Ohio fared worst among the three states. Ohio got 0.58 out of five stars and ranked 35th in the nation in a three-way tie with Georgia and Oklahoma based on its housing policies during the crisis.

That’s a marked contrast to the way Ohio has handled so much about the pandemic, DiNardo said.

“The state government has done a good job overall with the COVID crisis,” he said. “They’ve done a terrible job with housing, with evictions, with foreclosures. They’ve simply not met the need that’s out there, and I think they’ve kind of moved on so it’s very frustrating.”

Organizations throughout Ohio are pleading with Ohio Gov. Mike DeWine and the Ohio Supreme Court to do more to address the looming eviction crisis, DiNardo said.

“Right now the state of Ohio does not have an eviction moratorium. We have this piecemeal approach, which is not working. There is a moratorium on commercial evictions. So the governor said you can’t evict a business, but you can still evict families,” he said. “That’s ridiculous. I don’t know how else to say it. That’s completely ridiculous.”

Of course there are lots of landlords in Ohio who are working with their tenants.

Brittany Hellman found that with her landlord at Green Valley Apartments near Dent.

Hellman works at a doctor’s office where she draws blood. But she has been able to work only half as many hours since the start of the COVID-19 crisis.

Her landlord let her pay half her April rent on the first of the month and the second half using her next paycheck. He has agreed to the same approach for May, she said.

Hellman said she feels lucky. A lot of her friends and family members work in the hospitality industry, and they are completely out of work. Her biggest concerns right now, she said, are being able to pay her rent and make her car payment.

‘I don’t want a handout’

Kentucky’s pause on evictions was enough to help Yolanda Smith.

Smith rents an apartment in Fort Mitchell, Kentucky, where she lives with her four children. Her youngest splits his time between her and his dad, she said.

She’s a charter bus driver and hasn’t been able to work since March 10. This time last month, she was waiting for unemployment benefits to come through so she could cover her April rent. Her property manager allowed her to pay part of the rent the first week of April and the balance two weeks later, she said.

Smith finally started getting her unemployment pay about three weeks after filing for the benefit, she said. She received a stimulus check, too, which she said helped pay for food and some of her other important bills.

“I’m just glad it has kicked in,” she said. “It kind of takes some of the stress away from everything else.”

Her apartment building’s property manager told Smith she could pay May’s rent in two installments, too, like she did in April. Smith isn’t sure what’s going to happen after that, she said.

Smith has no idea when she will be able to go back to work. The bus she drove holds 55 passengers, she said, and her company doesn’t know yet when it will resume operations.

“I know it will probably be a little bit longer before we fully open up,” she said.

Even with many weeks of unemployment left to go, Smith said she can’t help but worry about the future.

The biggest stress, she said, is “really just what’s going to happen when my unemployment runs out, and I’m still not back at work? What I’m going to do, my next steps in being able to keep everything paid. I am a single mom.”

When her company does reopen, she said, that won’t fix everything immediately.

“If I do go back to work, it’s still going to be a couple weeks before I can even get paid,” she said. “And then it may not be a full paycheck.”

Bolden said the 21C owners have said the hotel will be closed at least through June 1.

She’s bringing home more money in unemployment right now, thanks to the CARES Act, than she earned working at 21C, she said.

Bolden said she’s grateful that the money has given her the financial stability to be able to pay two months of rent in advance, which she has never been able to do before.

But she said she would rather be working.

“I will take the steps to protect myself. But I’m definitely ready to get back out there,” she said. “I appreciate all the help the government is giving. I don’t want a handout. I’m ready to get back to work.”

Residents of Southwest Ohio seeking help to avoid eviction can call Legal Aid of Southwest Ohio at 513-241-9400 and ask for housing intake. Legal Aid of the Bluegrass also offers assistance to Kentucky residents. People also can seek help from their local Community Action Agency or other local nonprofit organizations that help with housing problems. The federal government also has some resources to help certain landlords and renters. Information about that help is online.