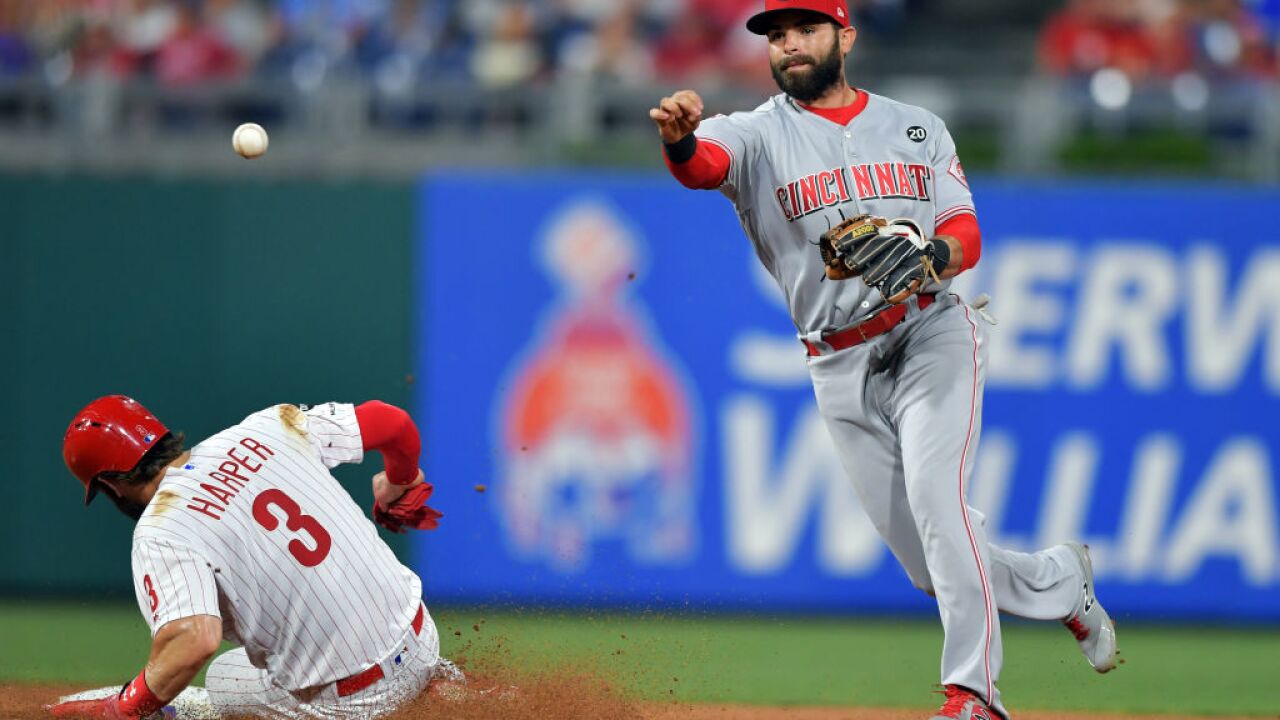 PHILADELPHIA (AP) — Nick Pivetta went the distance for the first time and got his first water cooler shower.

Pivetta struck out six in his first career complete game, Jay Bruce got another big hit and the Philadelphia Phillies beat the Cincinnati Reds 4-1 Saturday.

Pivetta (4-1) allowed six hits in his third start since his demotion to the minors. The right-hander is 2-0 with a 1.80 ERA since being recalled from Triple-A Lehigh Valley.

"It was special," Pivetta said. "It's a feat but still have a lot more goals at hand."

"The experience was a humbling one," Kapler said. "Since then, he's done exactly what we've asked. He's pounded the zone, forced the opposition to put the ball in play. His curve is sharper, he's more aggressive, assertive with his fastball. He's more determined, more focused."

J.T. Realmuto hit a solo homer and Bruce ripped a two-run single for the NL East leaders. Bruce is 8 for 18 with four homers and 11 RBIs in five games since the Phillies acquired him in a trade with Seattle.

"None of us like it when we don't score and we don't accept it." Reds manager David Bell said.

Pivetta retired 17 straight batters after allowing two hits to start the game. He hadn't gone more than 7 1/3 innings in his previous 64 career starts.

"I focused on getting better each day, one pitch at a time," Pivetta said. "Still have to keep going."

Rhys Hoskins snapped a 0-for-12 slump with a two-out double and Realmuto walked to load the bases in the first. Bruce then lined a single to right to give the Phillies a 2-1 lead.

Realmuto hit an opposite-field drive to right for his 10th homer in the fourth. Bryce Harper reached on an infield single and Jean Segura followed with an RBI triple to make it 4-1 in the fifth.

Nick Senzel led off the game with a double, went to third on Joey Votto's single and scored on Eugenio Suarez's double-play grounder. Pivetta didn't allow another hit until the seventh and worked quickly.

"There's an uptick in his tempo," Hoskins said. "That helps him, helps us behind him. There's less thought, less second-guessing. He's not getting in his head, in his own way. His stuff is electric."

Pivetta's complete game was Philadelphia's third this season. Zach Eflin has the other two.

Phillies: CF Adam Haseley was placed on the 10-day injury list with a left groin strain.