SORTA tax could mean more money for Western Hills Viaduct, but not without this committee's 'OK' 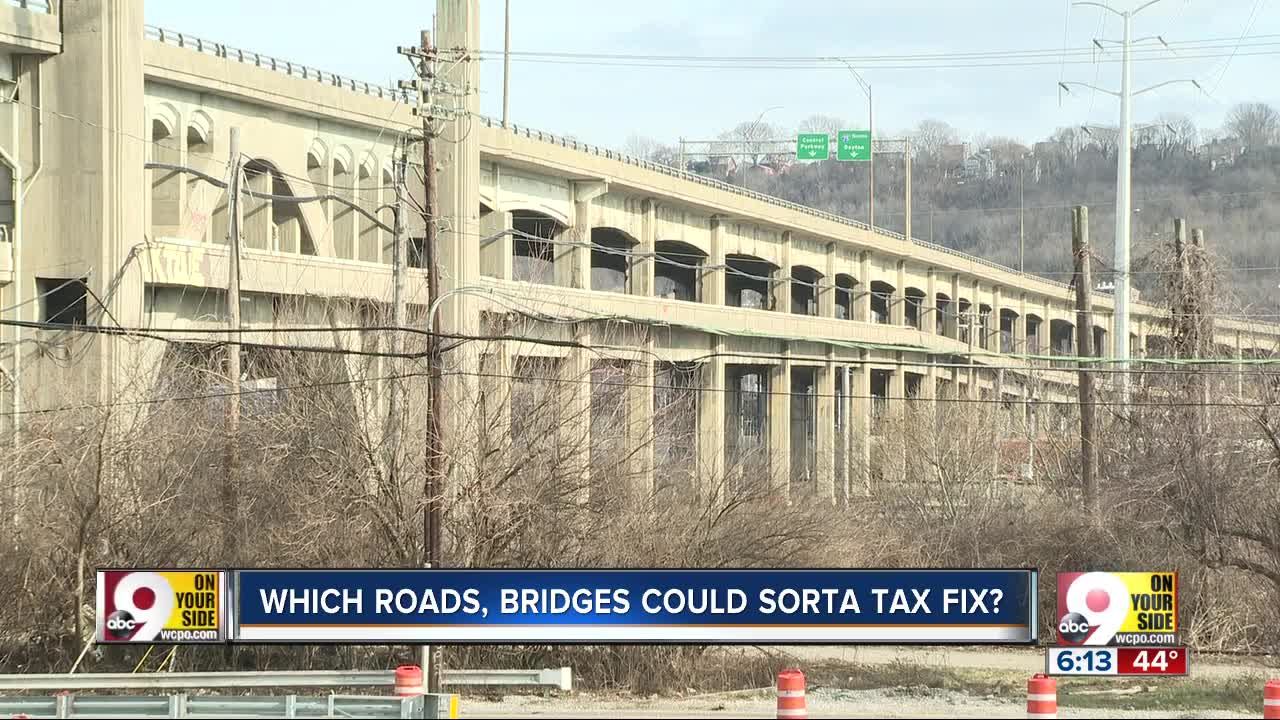 An estimated $1 billion worth of Hamilton County infrastructure projects could benefit from a proposed transportation sales tax levy.

HAMILTON COUNTY, Ohio — When county voters cast their primary election ballots on March 17, they won't be voting just on whether or not to finance enhanced Cincinnati Metro bus service. They will also be deciding whether or not to increase the county's cache of local funding for road and bridge projects.

But who will decide which road and bridge projects would get funding?

The Southwest Ohio Regional Transit Authority voted last fall to propose a 0.8-percent sales tax increase to the Hamilton County electorate. If passed, 75 percent of revenue raised from the new tax levy would go toward bus service, and 25 percent would go toward infrastructure improvements that would benefit roads and bridges used by Metro buses, per the ballot measure's wording.

But while SORTA might be the agency collecting the 0.8 percent of county sales tax revenue, it will be up to an obscure group of city, township and county officials -- known as the Hamilton County Integrating Committee -- to give the final word on how the transit authority allocates money toward road and bridge improvements.

They are not widely known by the general public, but their work is.

The Hamilton County Integrating Committee is a local subset of the Ohio Department of Public Works, and its sole job is to allocate roughly $20 million of state grant and loan funding for infrastructure improvements each year to projects proposed by the 50 local governments throughout the county.

To name just a few recent examples, the committee gave its stamp of approval to recent road projects like the widening of Martin Luther King, Jr. Drive, the new intersection of Five Mile Road and Beechmont Avenue in Anderson Township, the new bike lanes and lane configuration on Delta Avenue in East End, improvements along Winton Road in Springfield Township, and the new interchange at Colerain Avenue and Interstate 74 in Northside.

Per recently passed Ohio legislation, SORTA will be the first transit agency in the state allowed to levy sales tax revenue toward road and bridge improvements, but not without the approval of this committee. The appointed membership's lineup consists of:

If the SORTA levy passes in March, the transit agency will also start knocking at the committee's door for matching loans and grants to fund road improvements that would serve Metro routes.

They're not widely known because they don't often make headlines, said Hamilton County Engineer Ted Hubbard. "This is, by far, the best funding program I have ever seen," said the nearly 40-year county veteran. "The thing that’s nice about this is that everything is based on local standards, local control. We fund projects with minimal red tape, and we’re able to get projects done. That’s why it’s succeeded, and that’s why it’s so popular."

Hubbard began serving on the committee eight years ago, and now sits as its chairman. He believes the committee's decisions are generally well-received because of its clear criteria for which projects get funding.

"It considers the number of users, the conditions, so on and so forth," he said. "That’s developed in an open and notorious fashion. That’s what helps make this operation run as smoothly as it does."

The SORTA tax, if passed, would be limited to infrastructure improvements within county lines that sit within three-quarters of a mile from a Metro fixed bus route.

"Ultimately about two-thirds of the roads, I believe, inside the county get covered within the network of the bus system," said SORTA Board Chairman Kreg Keesee, although a more specific tally of eligible road and bridge improvements was not immediately available.

Ask 10 county residents which road or bridge project they would like to see happen "yesterday," and you might get 10 different answers.

INFORMAL SURVEY for Hamilton Co. folks: What road or bridge improvement -- w/in county lines -- would have the biggest impact on your everyday commute? (Plz reply w. a comment on this thread.) @WCPO

As far as Cincinnati City Council is concerned -- along with just about every West Sider one might encounter -- the top priority stretches over Interstate 75 and Spring Grove Avenue, connecting the neighborhood formerly known as Fairview along Central Parkway with South Fairmount: the Western Hills Viaduct.

"My objective is to absolutely prioritize the Western Hills Viaduct and so that when those resources come to the table, we’re all in lock-step that we want those resources prioritized or earmarked for the project," said Vice Mayor Christopher Smitherman during last week's City Council meeting. At that same meeting, the council unanimously approved Smitherman's resolution directing the city administration to "take steps necessary to enter into a funding agreement with SORTA" so that the viaduct is first in line for funding generated by the tax levy, should it pass.

As for other projects that might be eligible for funding, City Councilman P.G. Sittenfeld reminded residents last week that there is no shortage.

"I wouldn’t want folks who are watching at home to think, ‘Great, (the viaduct) makes us the top priority. What about everything else?’" he said. "While this item is number one, there is a whole lot of other stuff."

Keesee briefed the Integrating Committee members last Friday, as part of their first meeting of 2020. He said any road or bridge improvement project within three-quarters of a Metro fixed bus route could be eligible to use sales tax revenue as part of its funding.

"Ultimately about two-thirds of the roads, I believe, inside the county get covered within the network of the bus system if within three-quarters of a mile of a fixed route," Keesee told WCPO.

Here is a map of Metro's bus network:

The Cincinnati USA Regional Chamber of Commerce announced last year that more than $1 billion in infrastructure improvements across the county could fit the stipulations for funding from the SORTA tax. That's roughly half of the county's total estimated infrastructure needs.

The chamber has been working with consulting firm Stantec Inc. to generate those estimates as well as to identify examples of projects across the county. That detailed report is still forthcoming.