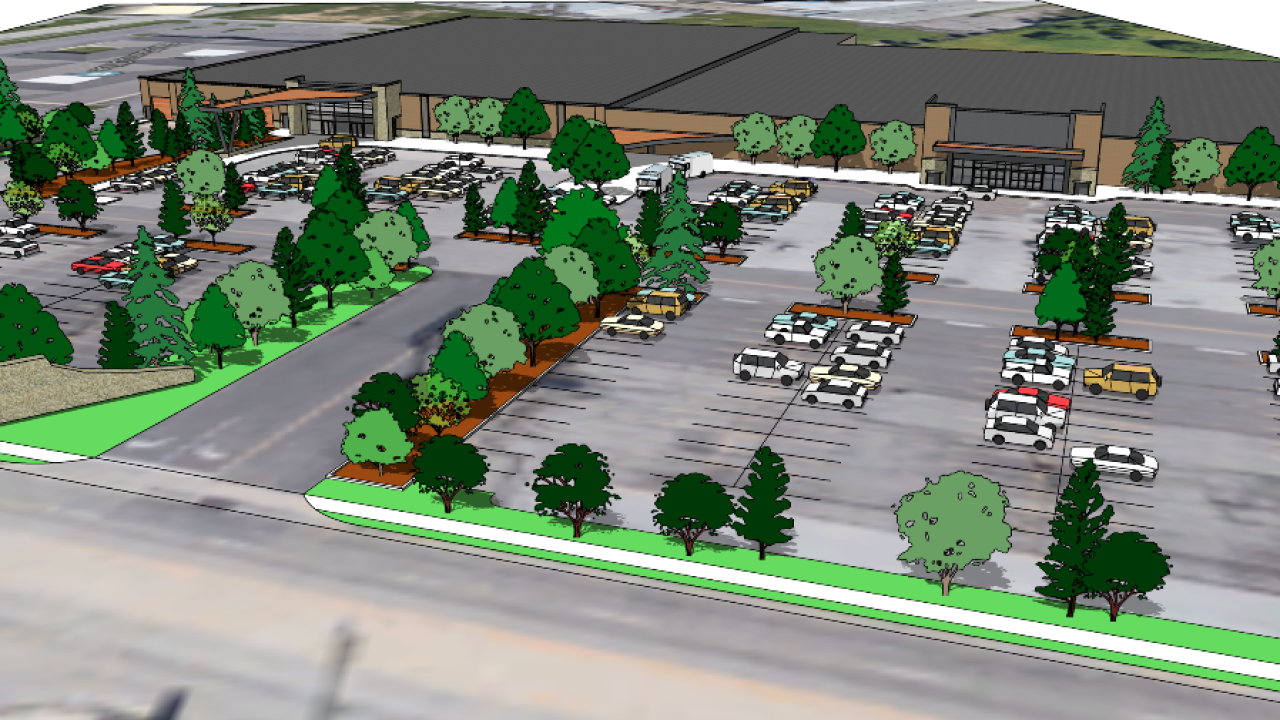 Provided: Hub + Weber
Rendering of a planned redesign of the Latonia shopping center.

COVINGTON, Ky. — The future of a long under-utilized Latonia shopping center is finally coming into focus. The vision is one of carbon neutrality, walkability and new jobs for the reemerging, historic neighborhood.

City of Covington officials held a virtual news conference Wednesday to announce that ReGadget and Blair Technology Group -- two locally owned and operated computer and technology firms -- will join forces to take over and renovate the former Value City and Burlington Coat Factory locations at Latonia Plaza II, commonly referred to as the "Latonia Shopping Center." Value City closed its furniture storefront in 2013 and Burlington Coat Factory closed its doors on Winston Avenue.

"The small businesses that have been the backbone of Covington have had a strong presence in the Latonia neighborhood," said Covington Mayor Joe Meyer about the neighborhood that was its own city for many years before Covington annexed it in 1909.

"When I was younger," Meyer continued, "Latonia was excited when it opened its first shopping center in the 1960s." Meyer explained how the Fort Wright Walmart store and other nearby retail giants' arrival over the last 20 years had made shopping centers like Latonia Plaza II struggle to compete.

"The people of Latonia have long wanted that center to be refocused and revitalized," Meyer said.

"The Latonia area has a lot of good things coming in," said Kurt Reynolds, co-owner of Florence-based ReGadget, LLC. "It's starting to improve and you can see the city is putting a lot of effort into Latonia, so we hope to be the next piece that helps improve the whole area."

The south Covington neighborhood has undergone a renaissance over the last several years, with roughly 15 new restaurants and businesses moving into the area, but the shopping center has sputtered alongside its neighbors' redevelopment.

Andy Blair, founder and CEO of Blair Technology Group, said the goal is to redesign the area from a "sea of asphalt" into a green space that is more welcoming to people walking and biking through the neighborhood. While the redesign will sustain most of the current parking available, it will also include planting dozens of trees throughout the parking lot as well as covered sidewalks and drop-off areas near the building's entrances.

"I think we'll offer a more attractive space than your typical strip mall or industrial complex," Blair said. "We'll have some centralized features for all businesses to share, both on the inside and the outside, and I think with young owners...will look for spaces like this that go toward being better to our environment."

Economic Development Director Tom West said the new development will complement the momentum gaining traction just down the street at Ritte's Corner. The central neighborhood intersection was the launch pad for a new program last year to install 500 new bike racks throughout the city.

We're in the process of basically rewriting the city's zoning code to try to have a more walkable, less automobile-dependent community," he said. "I think they're moving in this direction...to green up that space.

"That's going to help attract companies and talent to this facility and likewise the folks that are employed there will help make some of the strategic goals in the Latonia area."

ReGadget and Blair will occupy a portion of the currently vacant buildings and will seek out additional tenants. The two firms, which will join forces under the new name CovTech Industries, will bring a combined 100+ employees, roughly half of which will be new hires.