500 new bike racks only the beginning for Covington cycling advocates 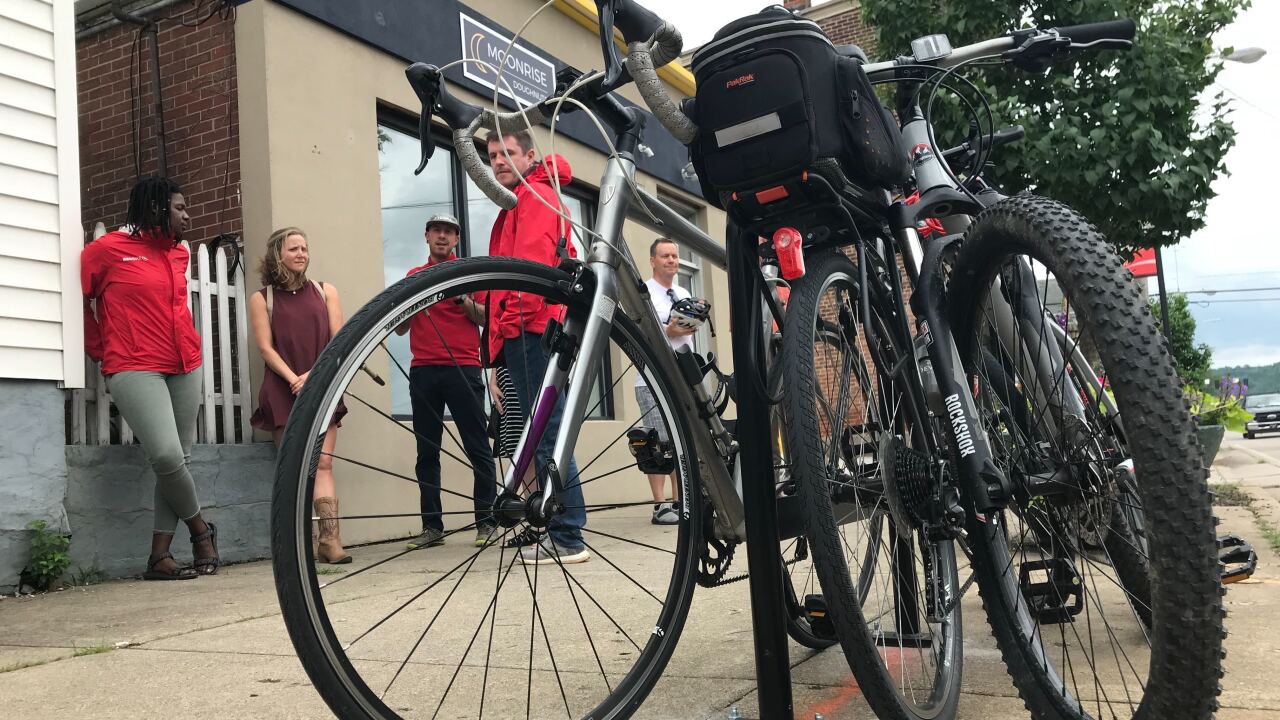 If you weren't looking for it, you'd probably miss it walking or driving by.

It's a humble piece of hardware bolted into the sidewalk -- a simple design made of understated black metal tubing equipped to accommodate two, maybe three bicycles parked at a time. There's nothing fancy about it by any measure. It's simply a place where residents and visitors to the south Covington neighborhood's Ritte's Corner can lock up if they choose to ride to grab lunch, coffee... or a doughnut.

The nonprofit behind the new bike rack, Ride the Cov, hopes even small additions like the bike rack outside Moonrise will get more people riding their bikes to and throughout Northern Kentucky's biggest urban center and all 19 of its neighborhoods -- from Latonia to Licking Riverside to West Covington to Botany Hills -- and everywhere in between.

Ride the Cov consists of a 10-member steering committee and roughly 100 "activists" who engage the community as volunteers.

"We noticed immediately that, of the existing bike parking in the city, there was no consistent style of rack," said Joe Koehl, who heads up Ride the Cov. "There was not a lot of thought put into what would be the most straightforward, user-friendly and secure."

Despite its humble footprint, Koehl sees the new bike rack as only a the very beginning of his group's efforts. Not only do they have 499 more identical bike racks waiting in storage to install throughout the rest of the city, their plans extend miles beyond just new bike parking.

Let that number sink in: Five hundred new bike racks, Koehl said, are ready and waiting for installation. Ride the Cov has identified 18 other locations so far, currently waiting city approval for installation. They hope to install 25 a week throughout the summer and fall.

That's at least 1,000 new bike parking spaces. Covington-based Road iD -- which manufactures wrist-worn identification bracelets for cyclists, walkers and runners who don't want to carry their wallets -- offered to house the bike racks in storage at their offices on Eighth Street in the heart of downtown Covington while Ride the Cov locates and submits new bike rack locations for approval with the city.

Beyond the new bike racks, Ride the Cov has been hosting group rides every bike season month, with the hope of making Covington-based riders more comfortable on the road.

That's why Koehl said he's working to engage the city to formulate a five- or 10-year looking ahead to future bike infrastructure investments and, hopefully, find ways to connect Covington's neighborhoods by bicycle.

Ride the Cov's next group ride is scheduled to leave Mainstrasse Village's Goebel Park, on Philadelphia Avenue, at 6 p.m. this Wednesday, June 26.