If it's a Hamilton Co. road improvement from the last 40 years, he probably had a hand in it 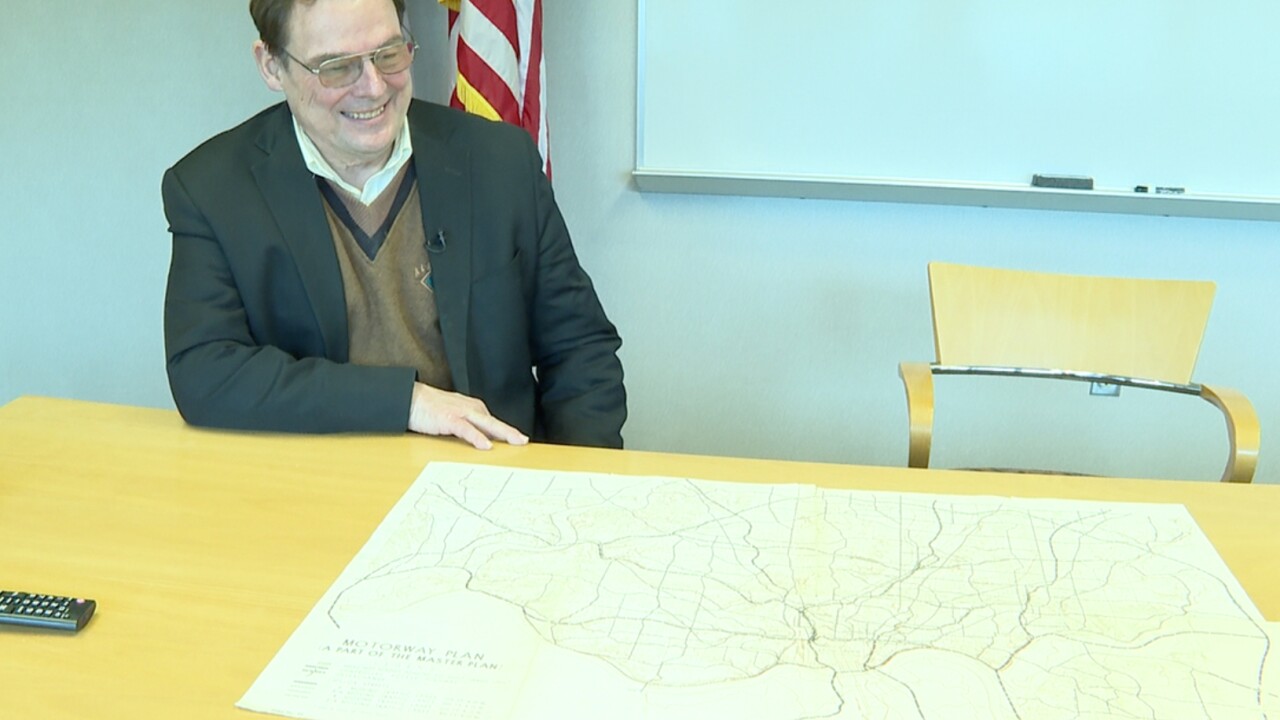 HAMILTON COUNTY, Ohio — Ted Hubbard was in elementary school when talk about what was known then as Cross County Highway was moving through the rumor mills of his hometown, Finneytown, Ohio.

Much of the discussion, Hubbard recalls, was over how a new highway stretching across Hamilton County -- now known as Ronald Reagan Cross County Highway -- would impact Cincinnati's northern suburbs.

"When I was growing up, there were folks in the area that were concerned about splitting the school district and that type of thing," Hubbard said.

The 16-mile highway was constructed over the course of nearly 20 years, between 1958 and 1997, and stretches east-west from Montgomery to Colerain Township, connecting Interstates 71 and 75 and the county's northern suburbs.

When Hubbard joined the Hamilton County Engineer's office in February 1982, Cross County -- known officially as Ohio State Route 126 -- was about halfway completed but did not stretch as far it does today. Now completed, Hubbard considers it one of the highlights of his 38-year career in the county office.

"It's made the whole metropolitan area operate far more efficiently. Cross County Highway has made some of the development on Winton Road to Hamilton Avenue. It's expanded the market area for those sites, and it's made those areas a lot more attractive to development," Hubbard told WCPO. "You don't have to go way up and around on (Interstate) 275. I'm glad it's there. I wouldn't want to be without it today."

In the time he worked for the county engineer's office, Hubbard moved up the ranks to what might be one of the county's less talked-about but more influential elected officials.

WCPO sat down with Hubbard on his last day in office to look back on the county's transportation needs over the last four decades, and to look ahead as county voters consider a significant sales tax levy toward public transit and road infrastructure improvements.

A county of freeways

In the county engineer's field operations facility in Springfield Township, Hubbard kept a conceptual road map of the county that dates back to what he said was sometime in the 1960s.

"This kind of gives you an idea of what the mindset was back in the 1960s on solving traffic problems," he said. Pointing to the area now served by Colerain Avenue, he recalled how back then the idea was to build the Colerain Modified Expressway: "There was a plan or concept at that time to build a freeway from the interchange at (Interstates) 74 and 75 up through Colerain Avenue and up to Oxford, Ohio," Hubbard said.

For an idea of what this would have looked like, part of that "expressway" eventually was built, stretching from the Rumpke landfill in Colerain Township to Ross, Ohio.

Another freeway proposed before Hubbard's time: the Queen City Freeway "that would actually go from River Road through (South) Fairmount over the Western Hills Viaduct, up through (University of Cincinnati) and out U.S. 50 to the east and on to Athens." People familiar with the Appalachian Highway, also known as Ohio State Route 32 all the way to the Hocking Hills and beyond to the state's eastern border, will have a feel of this type of road.

Hubbard said this approach was the zeitgeist of the time.

But building freeways through neighborhoods, townships and cities met its fair share of resistance from residents. The Ohio Department of Transportation's Eastern Corridor project came to his mind. The plan called for a multi-modal corridor that would accommodate more traffic, but, while Clermont County is going "full-steam ahead" with the plan, as Hubbard put it, communities in eastern Hamilton County pushed back.

"The impact, some communities felt, just wasn't worth it," he said. "Sometimes they'd rather live with the existing situation and not have to deal with the impacts that are caused by an improvement."

First, the cost is "huge" for a project like this and constitutes the biggest hurdle to getting the project done.

"When you've got a project of this magnitude, it's hard to get $335 million together. I mean, when you look at our office, with a budget of $26-27 million, I mean that's huge. That's huge for anybody."

Part of the problem is competing with other projects from across the state and the country for funding.

"You're competing with other projects across the country that serve interstate highways and, you know, international borders," Hubbard said.

But second, Hubbard wants people to know that -- even though it might seem like no progress is being made -- "nothing could be further from the truth," he said.

"We've already raised about $114 million," Hubbard said. "We're trying to continue, and eventually it's going to get rebuilt."

When it comes to car alternatives, it's up to voters

Hubbard's career consisted primarily of increasing traffic capacity on existing roads throughout the county, and this could be a reflection of the fact that more than 90 percent of the region's population commutes primarily alone, in their own vehicle.

But at least one project he's worked on would have included significant increases in capacity for car alternatives, too.

In addition to increasing capacity for auto traffic, the Eastern Corridor project would have increased capacity in the county for public transit vehicles and active transportation options, such as biking and walking trails.

"There was a point in time when I thought the Eastern Corridor was a solution that could really serve the communities," he said. "But the communities involved didn't really want the solution, and I can accept that."

As an elected official of Hamilton County, Hubbard viewed it as his duty to accept what residents were telling him.

"I have to respect the people who are going to be directly impacted, so my positions changed," he said.

When asked if he's noticing a trend toward more requests for multi-modal projects that provide alternatives to commuting by car, Hubbard pointed to March 17, the day of Ohio's upcoming primary election and when Hamilton County voters will decide on Issue 7.

"We're going to know in March what the public thinks, and I think that's the way to approach it," he said.

Issue 7 was proposed by the Southwest Ohio Regional Transit Authority and has the support of the Cincinnati Chamber of Commerce and elected officials from the Democratic, Republican and Charterite parties. It will ask voters whether or not to increase the county sales tax by 0.8 percent to finance future Cincinnati Metro bus service expansions as well as related road and bridge improvements. Supporters say the new tax levy would raise roughly $135 million each year, 75 percent of which going toward the transit authority's Reinventing Metro plan and 25 percent going toward road and bridge improvements throughout the county.

If passed, Issue 7 would shift the burden of funding Metro bus service from Cincinnati income tax ratepayers across the county to sales tax ratepayers.

RELATED: Issue 7 could mean road improvements, but not without this committee's 'OK'

Hubbard, who identifies as a Republican, said he appreciates public transit when it is "flexible" and meets local demand.

"The thing about transportation, every metro area is different," he said. "If you're in Washington, D.C., where everybody in the metropolitan area practically works downtown, transit serves a great benefit. That's my view. But in our area, we're spread out, and the travel demand is such that for transit we need something that's flexible.

"Buses, I think, are, in my view, a better way to go when it comes to transit," he said. "You don't have to worry if the jobs move from one community to another. You can adjust the routes."

Hubbard did not say explicitly whether he supports Issue 7 or not, but he called this ballot measure "a more logical way to go" than the county's most recent attempt to pass a transportation-related sales tax increase in 2002, a plan known as MetroMoves. That regional plan, which came with a $2.7 billion price tag for Hamilton County alone, included increased bus service but also called for new light rail transit lines that would have extended from the county to surrounding areas in Ohio, Kentucky and Indiana.

"What's happening now is that we have a concept here that's more bus-oriented; it's more flexible, and we'll see what the voters say," he said. "I think we're going to hear, and I think they need to weigh it. But it will mean an increase in the sales tax; so, you know, I think it's a fair question to ask voters."

Eric Beck, also a Republican, stepped in as Acting Hamilton County Engineer on Monday, March 2. As the office is an elected position, Beck will appear on the March 17 Hamilton County primary ballot. He is currently listed unopposed.