Getting to jobs, medical appointments is a big challenge for some veterans. Here's one possible fix 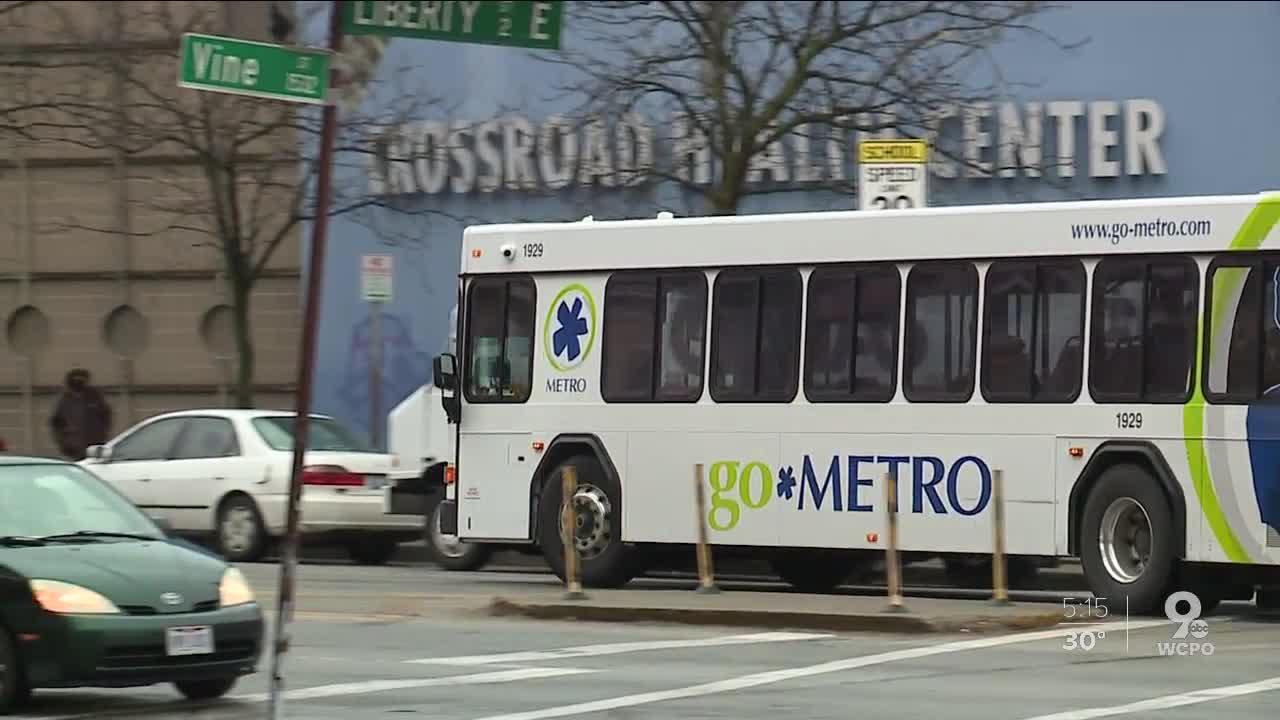 Lack of transportation can leave someone facing impossible choices,Chris Macklin said: "Do I go to my VA appointment and jeopardize everything I've worked for, or do I go to the job? Do I go to the grocery store? Can I go to the hospital? It's a choice that these guys shouldn't have to make. If we had extended services that were more affordable, it would definitely make a difference in all their lives."

CINCINNATI — Mickey Harlow wakes up in Over-the-Rhine every day thankful for his new job at Amazon's warehouse facility across the Ohio River in Hebron — even if it means he has to work third shift. Working overnights more than 15 miles from his doorstep, he said, is worlds better than his situation just a few months ago.

"I got in some trouble," the U.S. Marine Corps veteran told WCPO. "I had to stay at the Joseph House, had an OVI."

With a suspended driver's license and no vehicle, his options for employment were limited.

"I had to work Downtown, ended up working, you know, horrible jobs down here. I was working 10-hour days making $41 a day." he said.

Harlow bore with those "horrible jobs" for a month before he could save up enough money to purchase a monthly Cincinnati Metro/Transit Authority of Northern Kentucky bus pass.

Once he had the pass, things changed, he said: Suddenly, he had a way to get to and from the Amazon facility, where he knew he could find work.

"If it weren't for Metro, I'd be stuck working minimum wage down here somewhere," he said. "It helps a lot."

Today, Harlow is still living at Joseph House, a recovery and treatment facility serving veterans in OTR. Although he's grateful that his time there granted him the opportunity to save enough for his bus pass — Metro and TANK 30-day passes range in price from $70 to $170 — not all of his fellow veterans have the chance to save up that sort of money for transportation.

It turns out, Harlow said, having a ride that's reliable and affordable can mean the difference between a veteran's successful transition to life back home and finding that he or she has no home at all.

Job possibilities... if you can make it there

Chris Macklin served in the U.S. Army for eight years before he broke his leg and had to return home. After going down what he described as a "rocky road" following his discharge, he now works with Easterseals Serving Greater Cincinnati, a social services agency that assists veterans and others in need of help finding employment, housing and access to health care.

"My job is to get them where they want to be as soon as possible," he said. "If we have the transportation, it makes a big difference."

Macklin said a lack of transportation can pose one of the biggest challenges to veterans when they transition back to civilian life.

"Transportation, especially for job employment, is a big deal because the inner city jobs pay at minimum wage," he said. "We have to go outside of the (Interstate) 275 loop for them to get jobs that will help them sustain their families."

Out of roughly 820 calls for assistance placed by veterans to Easterseals in 2019, Macklin said more than 300 were transportation-related. He said calls for help getting to and from job fairs, interviews, medical appointments or runs for groceries come in "every day."

"That's almost a third of the calls, and that's not counting the veterans that have jobs but may fall short because of a bill, or have to get to the VA but don't have enough money to get to the VA," he said.

Lack of transportation can leave someone facing impossible choices, Macklin said: "Do I go to my VA appointment and jeopardize everything I've worked for, or do I go to the job? Do I go to the grocery store? Can I go to the hospital? It's a choice that these guys shouldn't have to make. If we had extended services that were more affordable, it would definitely make a difference in all their lives."

One root of the challenge, Macklin said, comes from the high level of structure and resources available while one is serving actively versus after their term of service.

"Everything was given to me in the military," he said. "I didn't have to look for a resource. I didn't have to ask for help. Out here it's a little bit different. You know, you go and you knock on the door and ask for help, and you get told 'No,' and so that's hard for these guys, especially having the pride that we have. It's kind of difficult, at times, to ask for help."

Anthony Pennington agrees. The Cincinnati native served in the U.S. Army Reserve for eight years. WCPO met him in the middle of a job search that has proven difficult due to his lack of access to transportation options.

"In my situation, this was a friend that said, 'Hey, this could be a possible job for you if you can make it to the job fair,'" he told WCPO.

He repeated those last words emphatically: if you can make it. When he realized he wouldn't have a ride to that job fair in Florence, Kentucky, he called his friend to let him know he couldn't take him up on his offer.

Cincinnati City Councilman Jeff Pastor is also a veteran, having served non-combat duty for the U.S. Marine Corps. The Republican West End native wants to find a way to help address the persistent problem veterans can face when they come back home to return to civilian life.

"The last thing that you want from a veteran who has served this country honorably is for them to have a barrier to re-assimilate back to society," Pastor said.

That's why last month Pastor presented a motion to City Council directing the city manager to work with the Southwest Ohio Regional Transit Authority, which owns and operates Cincinnati Metro, to explore the feasibility of allowing veterans to ride Metro buses for free.

"Regardless of where you’re at, what station you are in life, as a veteran, I believe that one of the perks should be your ability to ride the public transportation system for free," Pastor told WCPO. "Whether you’re here or in Seattle or in Montana, wherever, you should be able to ride for free."

Pastor hopes the proposal would give veterans an alternative option to the mounting — and, in many cases, insurmountable — expenses associated with owning and maintaining a car.

"Quite frankly, you may not have the means to purchase a vehicle. I mean, there are VA loans for home-buying. Very rarely do you see a special program for veterans buying vehicles," he said.

"You’ve served this country honorably, and so we should serve you."

WCPO reached out to SORTA officials, who confirmed that Metro CEO Darryl Haley has met with Pastor to discuss the idea. In an email, SORTA spokeswoman Brandy Jones said, "At this time we are looking into the feasibility of implementing such a program," but did not have a cost estimate to provide as of this writing.

The idea of being able to ride the bus for free caught Harlow's attention.

"It’d be a blessing, something a lot of the guys here need that don’t have it. They’re — they’re stuck," he said. "It would be a great benefit."

"That would mean the world," he said. "Not having anxiety of having a job prospect and not being able to make it, not worrying about how you can make it. This is a great opportunity."