COLUMN: Those paths along the Roebling Bridge -- they're for walking, not biking 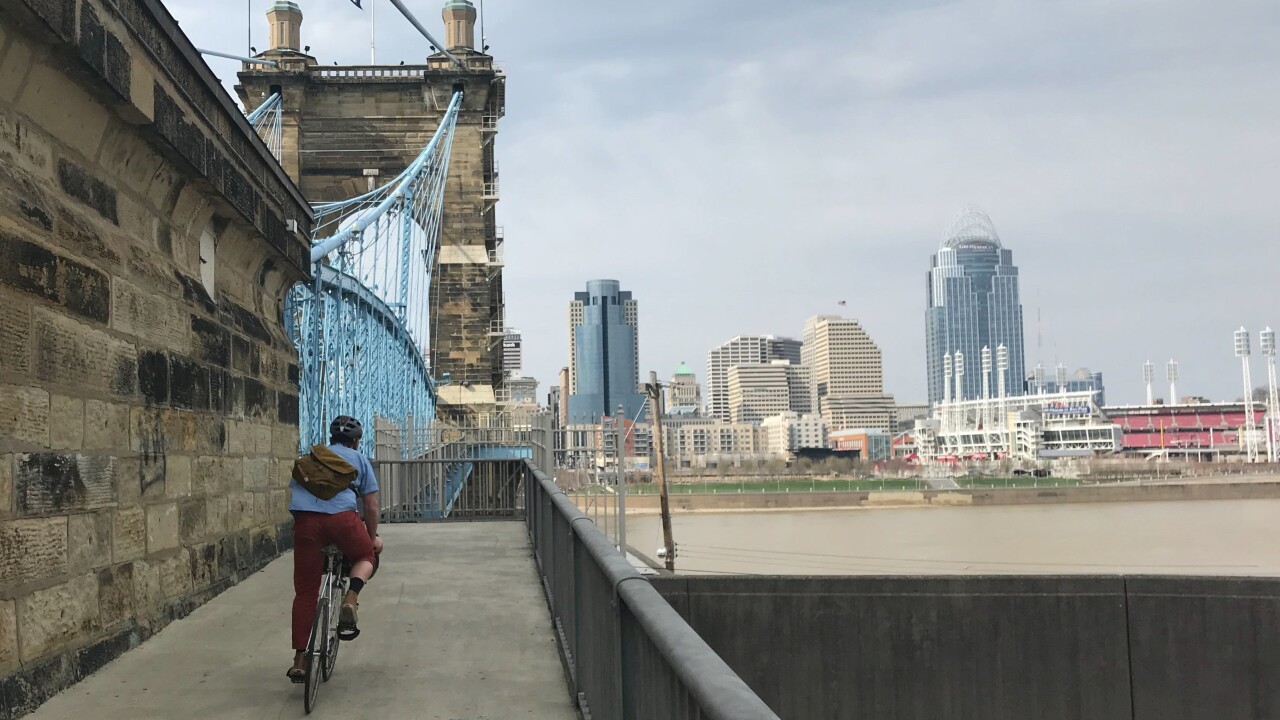 Pat LaFleur reports on transportation and mobility for WCPO. He also commutes by foot, bike and/or bus nearly every day.

OK, folks. It's getting warmer -- finally -- and I know we're all excited to be out walking and jogging and riding bikes and e-scooting around town. It's my favorite time of year, for sure.

I also know that, for those of us who bike between Covington and Downtown, it can be tempting to ride our bikes across either of the two John A. Roebling Suspension Bridge walking paths. It's understandable: The other options available -- the Clay Wade Bailey Bridge or the Veterans Memorial (Fourth Street) Bridge -- are intimidating and don't connect nearly as closely to The Banks or Downtown as the Roebling does.

Here's the thing, though.

Don't do it. Just dismount and walk. Please. I -- as a cyclist who has ridden those walkways countless times in my life -- am begging you to stop. It will add less than 10 minutes to your trek across the bridge.

I decided to stop riding on those walking paths for a number of reasons.

First, it's illegal. According to the Kentucky Transportation Cabinet, those pathways are not zoned for anything but pedestrian traffic. But I'll admit this wasn't what persuaded me to stop.

Foremost: It's really dangerous, and, coming from someone who has willingly made himself an embodiment of the "vulnerable road user," I don't say that lightly.

It's not just dangerous to the people walking along the paths -- especially on Reds game days, which just entered full swing again this week. It's also dangerous to you, the cyclist.

I'll demonstrate this point with a personal and terrifying anecdote.

This was relatively recent; I don't remember when exactly, but within the last few years. I was riding my bike south into Covington, across the east-side walking path, approaching two or three people walking ahead of me. I rang my bike bell, trying to warn them that I was approaching. I rang again. No one responded or moved, so I began to slow my approach.

This is when I just should have jumped off my bike and walked.

I rang my bell a third time, and the party moved to the right, clearing space for me along the left, railing side of the walkway.

Again, this alone should have prompted me to hop off the saddle.

As I passed on the outside, one of those folks tripped and stumbled into me.

The next several seconds were a blur of adrenaline, fear and quick regret.

The impact knocked me into the hand-railing. Doesn't sound like too big a deal to most, but, because I stand at 6 feet 3 inches, that means my seat sits just above the hand-railing. That meant I had to grab onto the railing in order to stay on my bike and not plummet over the side of the bridge, dropping 50 feet into the center current of the nation's second-largest river.

I'll repeat that: I had to grab desperately onto the railing if I didn't want to swandive into the Ohio River. If I had lost my grip on the railing, I would have lost my seat and gone over into the water.

The people walking were mortified and immediately grabbed onto me, too. They apologized over and over again and walked with me the rest of the way across the bridge.

I quickly realized that it wasn't their fault. Think of all the cracks and potholes along those walking paths. I should have expected someone to trip.

Even more, I was the one who put myself at risk by riding on a pathway not designed for bicycles. The railings aren't high enough. The pathways aren't wide enough to accommodate both people walking and people riding their bikes.

Now, I'm not saying these pathways are death traps for cyclists. I have myself -- and have seen countless others -- safely make it across on a bike without incident, and about half the time I'm walking across, I don't encounter a soul. This was about as bad a stroke of luck as I could have drawn, short of actually falling into the river.

But heed this tale: It's a bad idea.

So, some humble advice: Next time you roll up to the Roebling ready to pedal across, just hop off and walk. It's better to take in the beautiful Cincinnati skyline or the gorgeous homes lining Covington's riverfront anyway. Or pedal back and wait less than 15 minutes for the next Southbank Shuttle -- the shuttle comes with front-load racks to hold your bike while you ride. It picks up near both feet of the bridge -- at the corner of Third and Greenup streets on the Kentucky side or outside Yard House on Marian Spencer Way in Cincinnati.

Or, if you absolutely insist on riding across that bridge, prove your mettle.

Ride across the metal roadway.