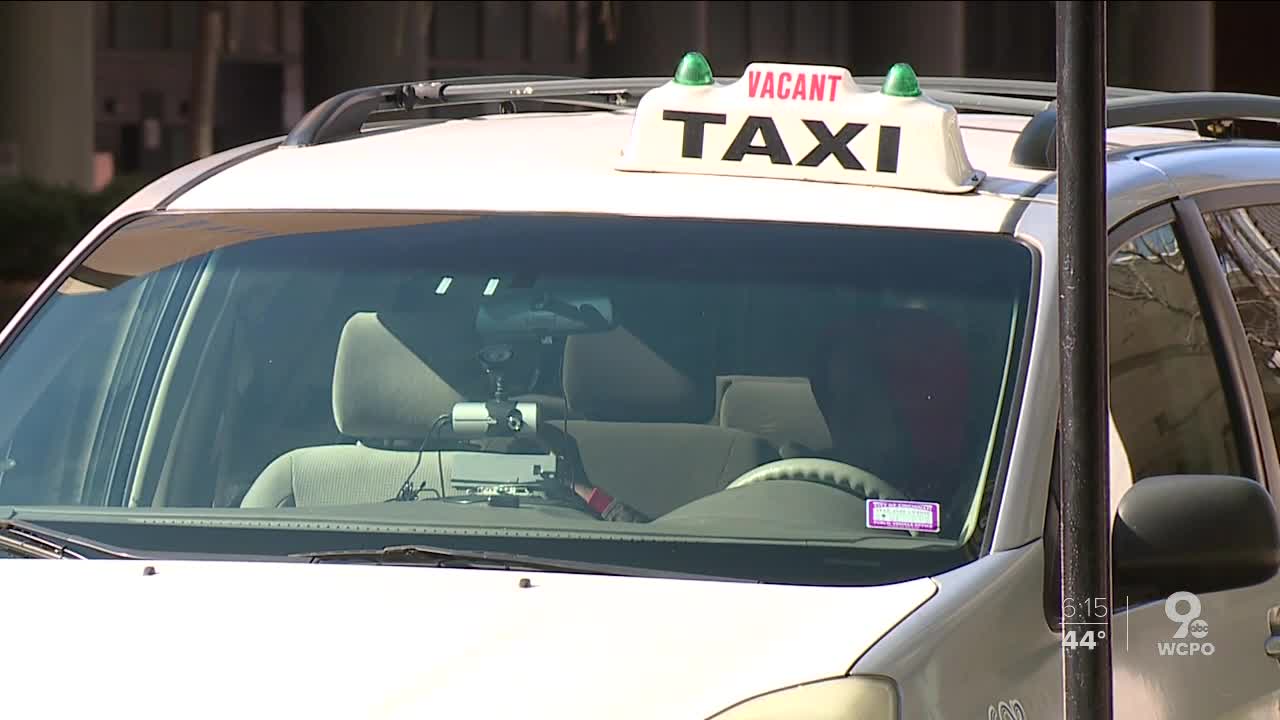 The North Avondale resident said he used to be able to ride a Cincinnati Metro bus up to her home in Blue Ash, but recent cuts in service have made that a difficult trip to make on his own.

"They used to have a route that went right by her house a few years back, but that was only 8 a.m. in the morning and 6 at night for people who worked out there," he said.

Simply driving up to Blue Ash isn't an option for Shuemak. He uses a motorized wheelchair and has a vision impairment. In Cincinnati, that means he can't venture very far away from Metro's network of bus lines.

"I’ve adapted to going to places only where the Metro goes because that’s my primary way to get around within the city," Shuemak said. "My life’s never lived off the bus line. When I go look for apartments, it always has to be on the bus line, within a block or so.

"You learn to adapt or you get left behind."

Shuemak said that, in a more perfect world, he could just call up a taxi to get him to places where Metro doesn't go. But that's not an option for Shuemak either -- not because he doesn't want to give taxi companies his business, but because the city of Cincinnati is in short supply of taxi vehicles that can accommodate his physical mobility needs.

"It's pretty depressing," he said. "You know, you couldn’t go visit friends on the West Side. That’s an hour, hour-and-a- half bus ride. So it was like, 'Yeah, we’re not gonna see you very often.' If there were cabs, you know, I could just call a cab in a heartbeat."

For now, though, Shuemak isn't holding his breath.

When President George H.W. Bush signed the Americans with Disabilities Act of 1990, it became a federal crime to discriminate based on a person having a disability. As it pertains to taxi companies, the law does not require that they provide accessible vehicles, but it does require that any vehicle in a cab company's fleet that is not a standard automobile -- meaning, a van or an SUV -- is required to accommodate customers using motorized wheelchairs.

An "accessible vehicle" refers to one that is equipped with a ramp or lift, tie-down straps, and in some cases a lowered floor or raised ceiling to accommodate a passenger who needs to remain in their wheelchair while in the vehicle.

"The Americans with Disabilities Act is celebrating its 30th year since it’s been passed, and we’re still not doing the things that were in the law 30 years ago," said real estate attorney and former Cincinnati City Councilman Kevin Flynn. "Companies are trying to figure out ways around the law rather than complying with the law."

Flynn has used a motorized wheelchair since a serious car crash on Interstate 74 left him a quadriplegic in 2002. When voters elected him to City Council in 2013, he had regained some use of his arms and hands, but he remains largely bound to his chair.

During his time on council, Flynn initially hesitated to take up the issue of accessible transportation.

"I didn't want to be known as the 'wheelchair councilman,'" Flynn said. "I wanted to be known, first and foremost, as a good councilman."

But throughout his single term on Council -- he chose not to run for re-election in 2017 -- he found the lack of accessible taxis in Cincinnati to be something he couldn't ignore.

In 2016, Flynn began working to amend Ohio state law and Cincinnati municipal code to make it easier for local cab companies to comply with ADA regulations. In 2016, Flynn chose not to hire an office staffer in order to redirect those dollars into a fund providing $55,000 in grant money for cab companies to equip their vehicles for people in wheelchairs.

Per IRS regulations, expenses related to converting a van to a wheelchair-accessible vehicle can also earn a tax credit.

In 2018, after Flynn had already left council, Cincinnati lawmakers enacted the grant fund and passed an ordinance requiring that any cab company with 10 vehicles or more registered in the city provide at least one accessible vehicle and any cab company with 20 or more provide two.

According to Flynn's research -- corroborated by independent inquiries made by WCPO to nearly 40 taxi companies with vehicles registered in the city of Cincinnati -- not one of those companies said they had the means to accommodate people using motorized wheelchairs -- even those that operate using minivans.

"I hoped to be able to use the carrot, and say, 'Please, do the right thing, and we’ll help you,'" Flynn said. "But it’s gotten to the point where it’s time to use a little bit of the stick and say, 'You have to do this.'"

It turns out, though, that the stick -- at least as far as the city administration can swing it -- might not reach these cab companies.

One of those companies, Ran's Cabs, LLC, reduced its number of vehicle registrations from more than 30 in 2019 down to nine in 2020, in order to comply with the ordinance, which recently took effect in January.

Ran's owner, Inisha Bazel, addressed City Council during its Jan. 23 meeting, saying the ordinance has restricted the company's ability to operate in the city.

"We’re trying to get some of our cabs registered. Due to the new handicap ordinance, we’re only allowed to renew nine cabs. So we can’t even serve the 3,000 people we do have, and I had to lay off, like, 40 people," she said. "They’re out of work due to this ordinance."

In order for Ran's to register all of its vehicles with the city, the law would require two wheelchair-accessible vehicles in the company's fleet. This could cost between $70,000 and $80,000, Bazel said. This does not include the ongoing costs of insurance and first aid training drivers will be required to have when operating an accessible vehicle, Bazel later told WCPO.

Newport, Kentucky-based Express Mobile Transport specializes in transporting customers with mobility impairments, with five wheelchair-accessible minivans in its fleet. According to general manager Doug Mader, being a subsidiary to Executive Transportation Services helped Express afford the upfront and ongoing costs of operating those vehicles.

"We’re very fortunate because we’re a 60-year-old company, so our culture’s in place," Mader said. "There are a lot of costs involved in buying the vehicles, insuring the vehicles, et cetera.

"In all the costs that are involved, I believe it would be very difficult for someone to just start on their own and buy three vehicles and say, 'I’m going to do this.'"

In response to Ran's concerns, City Council amended the 2018 ordinance establishing the grant fund to provide three $16,500 grants to purchase new accessible vehicles, rather than the ordinance's original call for 10 $5,500 grants. A subsequent motion filed last week by City Councilmen Greg Landsman, Chris Seelbach and P.G. Sittenfeld would direct the administration to find a funding source to keep that program going once the three grants have been dispersed.

ADA difficult to enforce on a local level

Flynn will be the first to acknowledge the challenges facing both the cab companies in their attempts to comply with ADA regulations and the city in its attempt to guarantee accessible taxi service to residents who need it.

"Taxi companies have had it hard," Flynn said. "No question that the advent of Uber and Lyft, transportation network companies, have really hurt the taxi industry. The last thing I want to do is put anybody out of business."

By the same token, ADA regulations can be difficult to enforce at a local level.

"The city police don’t enforce the ADA. The building departments don’t enforce the ADA, and frankly it's not their job," Flynn said. "The real enforcement mechanism is the (U.S.) Department of Justice. Even just getting their attention is difficult. They’ve got to cover the whole country."

For now, they're coping with diminishing Metro bus service as the transit agency deals with depleting funding and increasing operational costs. And when they need to get somewhere the bus won't go, they're stuck waiting for taxi companies to expand their service offerings.

"I’d be a lot more independent because I wouldn’t have to call my mother who lives 20 miles away to take me to the grocery store. I’d be able to get to work without trying to get on the bus or risking injury to myself."

Flynn said the best way he knows to hold cab companies accountable to the federal guidelines is for people like Shuemak to speak out.

"It’s really up to individuals to initiate the complaints to get the ball rolling," he said.

But it's not always easy.