Kevin Flynn fought for years for a City Council seat, but now he prepares to give it up 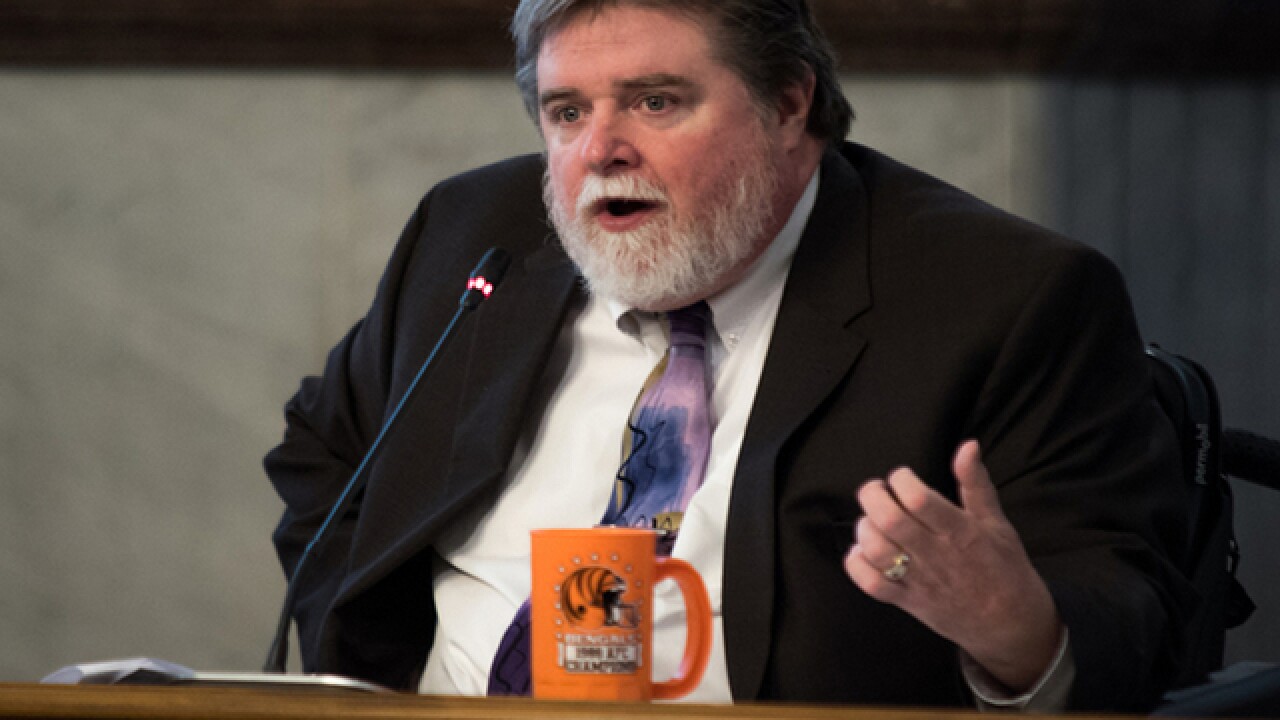 Campaigning from a wheelchair isn’t easy.

When Kevin Flynn ran for Cincinnati City Council in 2009 and 2011, before finally winning a seat in 2013, he took in stride the unexpected challenges of being a quadriplegic on the campaign trail.

He couldn’t maneuver his wheelchair up steps to meet voters at their front doors. At political events, while other candidates stood on stage to speak, Flynn sat in his wheelchair off to the side. People made fun of the leg braces he wore in his campaign ads, and their jokes brought his daughter to tears.

After overcoming such unique and rigorous obstacles to get elected, why would Flynn, who has the name-recognition to likely win a second term on City Council, decide not to run again?

It is a decision that Flynn, 56, has wrangled with for almost two years. He first announced last September that he would not run again, but then he hedged earlier this year and said he may reconsider.

Even now, as he insists he will not run, other council members are hoping to change his mind before the Aug. 24 Hamilton County Board of Elections deadline.

“If Kevin were to run for re-election, I would endorse him, I would assist him to raise money, and I would campaign for him,” said Councilman Christopher Smitherman. “He brings a lot of value to council. I wish he would reconsider and run, and I wish the public could fully appreciate the importance of him being re-elected if he were to change his mind.”

Although it takes Flynn three hours to get out of bed and dressed in the morning because of his disability, he has never missed a single council meeting in nearly four years.

He often gets up at 3 a.m. to read city business on his iPad, giving scrutiny to 80-page development deals, monthly finance reports, and the bowels of the city budget.

“Most people will look at the first couple of pages and the summary, but that doesn’t tell the whole story,” said Flynn, who is a real estate lawyer.

Vice Mayor David Mann said he has never seen a leader quite as prepared as Flynn.

“The depth that he looks at everything is amazing -- without precedent in all the years I’m familiar with,” said Mann, who has been at City Hall for more than two decades. “He has the unique respect of members of council …  when people disagree with him, they are very respectful because they admire what he’s done.”

While Flynn seems at peace with his decision not to run again, he also worries about the future of City Council without him.

“I just worry that council members may vote one way, not because they think of … the rightness of their position” Flynn said. “But they may not know. They may not have investigated fully.”

Flynn is a spending watchdog who criticizes earmarks and doesn’t mind being the lone dissenter on votes taken, just to prove a point.

Flynn also fought to reinstate audits to monitor how city money is being spent.

“I’ve said since the beginning, I’m not a politician even though I understand how politics is played,” Flynn said. “I could play the game. I choose not to.”

‘This would not defeat us’

Flynn’s time on council is perhaps overshadowed by his long journey to get there.

Peggy Flynn knew when she married her husband nearly 30 years ago that this burly, affable Irish-Catholic man had dreams of running for office someday.

A shy girl from Chicago who didn’t have many friends yet in Cincinnati, Peggy asked her husband to put off his political aspirations until their three young children were a little older. And he did.

And then an accident almost took that dream from him.

On Feb. 22, 2002, Kevin Flynn was driving from his law office to drop off a document to a client, on his way to a meeting at his beloved alma mater, LaSalle High School.

He swerved to miss a car that was edging into his lane on Interstate 74. His car crossed the median and struck an oncoming car.

Some of Flynn’s vertebrae were crushed and others compressed on his spinal cord, cutting off blood and killing tissue.

At age 41, Flynn was paralyzed.

Flynn’s size and athleticism had always been a big part of his identity. A former wrestler, football player and rugby player, he even worked as a bar bouncer during college.

“One of the things that is so weird is that it happened in an instant," Flynn said. "It wasn’t like a progressive disease where you know you’re getting worse and you know that it’s not going to get better."

Peggy Flynn remembers being in Flynn’s hospital room, all day, every day, as he began to recover, but she never let him see her cry.

“From the minute it happened I told him, ‘We will do this better than anyone has ever done it,’” Peggy Flynn said.

“I had three young kids looking at me, wondering what we would do,” Peggy Flynn said.  “I never lied, I said ‘It’s an adventure. We’re all going to do it together.’ It was my mission. This would not defeat us.”

Flynn, who could not sit up on his own, was determined to regain his independence.

Today, with leg braces, Flynn can walk 250 feet during his therapy sessions, a feat that doctors still can’t explain.

“I guess from my perspective, the worst was over and now it’s all about getting better," Flynn said. "And that’s the way I always thought about it. I really truly felt blessed that I was still alive and that God had a purpose for me."

After the accident, Flynn continued to teach real estate law at the University of Cincinnati. His wife encouraged him to still pursue his dream of running for City Council.

“I felt really guilty after his accident, that he just lost his shot to do what he really wanted to do,” she said. “I made it my mission to support him the best I could. It meant giving every resource we had, and we did.”

The couple donated $220,000 of their own money to his campaigns, and that debt has never been repaid.

But it was all worth it, she said, in November 2013, when Flynn, who ran as a Charterite, finally won a City Council seat.

Flynn is most proud of his work restoring the city budget to its core priorities, he said, such as hiring more police officers and firefighters, paving city streets, fighting blight and bringing in new economic development.

“If I were running for office, those are the things I would be talking about,” Flynn said, chuckling.

For the most part, Flynn has kept out of the political fray over the past three and a half years.

But there was one big controversy.

Within weeks taking office, Flynn voted to restart the streetcar, after campaigning as an opponent to the project. Critics lashed out, calling him, “Flip Flop Flynn.”

“I was trying to do what was responsible,” Flynn said, because if the city pulled out, it would lose $80 million it had already invested.

“I have no ideological pull towards whether the streetcar is a good thing or a bad thing,” Flynn said. “By the time we were elected we were pretty much stuck with it.”

Flynn always tried to make decisions based on what was best for the city, he said, even if it wasn’t politically popular.

Flynn is also highly focused on the council meetings, no matter how many hours they last, Murray said.

“Kevin … spends time really listening to every person in there,” Murray said. “I never hear him complain at council, no matter how long the meeting goes.”

During those long meetings, Flynn can often be seen shifting positions in his wheelchair.

“People don’t realize that when I’m shifting in my chair it’s not because I’m antsy,” Flynn said. “It’s because I know if I sit still, I can get a pressure sore that will kill me. It’s what killed Superman, Christopher Reeve.”

Flynn’s family has quietly worried about how long his health would hold up against the daily political grind of City Council, and if he could withstand another campaign.

Flynn’s daughter, Shannon Flynn, said she bluntly told her father she didn’t want him to run for a second term.

“I told him I think that if you run again you’ll die," she said. "I wasn’t being dramatic or joking. The stress and the responsibility he feels … beat him into the ground. It wears him down mentally, emotionally and physically. It’s selfish of me but I want my dad to be around and enjoy life longer.”

Flynn may be stepping away from City Council, but he isn’t giving up on public service.

He plans to devote more time to fighting for the rights of people who have disabilities. He may even sue the city in the coming years for not complying with the Americans with Disabilities Act.

“I tell people this all the time, ‘You’ve got 175 days to get your act straightened up because that’s how much longer I have on council,’” Flynn said. “And then I’m coming after you, the gloves are coming off.”

One of the reasons he said he didn’t vote for the city’s capital budget this year is because council decreased funding to make the city’s recreation centers accessible for people with disabilities.

“We reduced the funding from a $100,000 to $9,000," Flynn said. "And I couldn’t get my colleagues to switch that, to replace that. We found money for all of this other stuff but we couldn’t find money. So that tells me we have a lot more work to do.”

During his remaining time on council, he’s trying to pass a local law to give incentives to taxi cab companies to cover the cost of modifications so they can become wheelchair accessible. He’s also trying to get the city to do a better job of hiring people with disabilities.

“I want to use the fact that people recognize me for good,” Flynn said. “Not for my own benefit, because I’m not planning on running for anything ever again. But to help organizations.

“That’s one of the good parts about being in wheelchair. People do recognize me.”