Unvaccinated student who sued over chickenpox ban caught the illness, is back in school 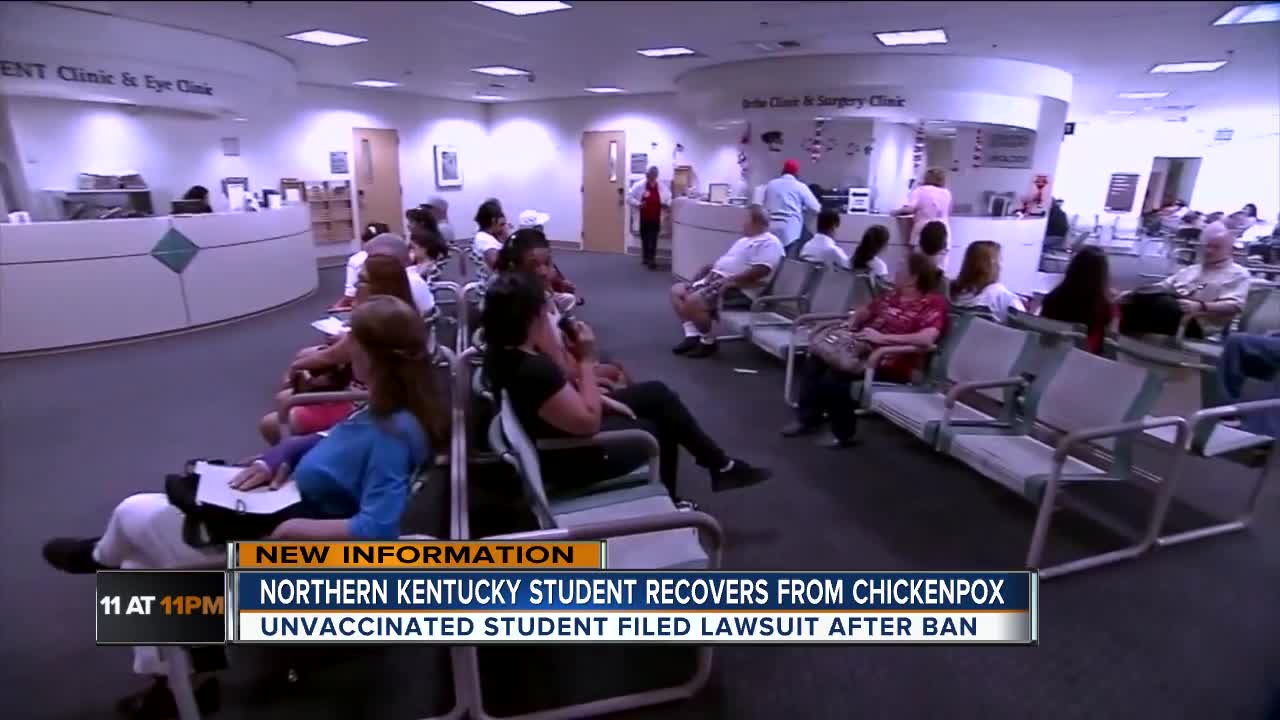 The high school basketball star whose refusal to get a chickenpox vaccine got him banned from school and the team came down with the illness last week, recovered and is back in class, his attorney told WCPO on Wednesday.

WALTON, Ky. — The high school basketball star whose refusal to get a chickenpox vaccine got him banned from school and the team came down with the illness last week, recovered and is back in class, his attorney told WCPO on Wednesday.

Kunkel, a senior at Assumption Academy in Walton, sued the health department after it banned him from attending school and extracurricular activities following a February chickenpox outbreak at the high school and its associated elementary school, Our Lady of the Sacred Heart. The ban applied to students who did not have proof of vaccination or proof of immunity, the suit said.

According to the suit, Kunkel and his parents had always declined the vaccine because of "their fundamental and deeply held religious beliefs."

The chickenpox vaccine is among a handful originally created with cell lines derived from aborted human fetuses, although modern formulations no longer include any human fetal tissue.

“The 2005 Vatican statement says the use of these vaccines with aborted fetal cells in them is morally wrong. It’s always going to pose a moral issue," Kunkel told WCPO in April.

The 2005 Vatican study he referenced did conclude that the creation of products derived from aborted fetuses was immoral, but Catholics' use of such products could be justified if it preserved the safety of others, particularly pregnant women and children. The greater responsibility, the Pontifical Academy for Life found, was to use alternative vaccines when possible and "employ every lawful means in order to make life difficult for the pharmaceutical industries which act unscrupulously and unethically."

Kunkel and two dozen other students who were banned appealed the ban and lost. After Kunkel sued, a judge upheld the health department ruling.

The health department would not confirm Wednesday that it had released the ban on Kunkel, but it did release a statement criticizing Wiest and defending the ban. It said:

“Recent news articles reporting statements by Chris Wiest, the plaintiffs’ attorney, downplaying the dangers of the chickenpox virus are alarming and disappointing. Wiest’s comments are dismissive of the severity of this virus, and his recent announcement that he is advising his clients to actively contract the virus so that they can become individually immune to it is deeply concerning to the Northern Kentucky Health Department.

“This is clearly not appropriate medical advice, according to physicians and infectious disease experts. Chickenpox, also known as varicella, is an acute infectious disease. When introduced in an unvaccinated population, the virus can rapidly spread, causing serious, even deadly consequences, to people who are particularly at risk, such as infants, adolescents, pregnant women, and adults and children with weakened immune systems, including those receiving cancer treatment.

"While the tactic Wiest suggests may provide an individual with future immunity from chickenpox, this infected person can easily spread the virus to other, unsuspecting people, including those particularly vulnerable to this potentially life-threatening infection.

"Encouraging the spread of an acute infectious disease in a community demonstrates a callous disregard for the health and safety of friends, family, neighbors, and unsuspecting members of the general public. A person who has contracted chickenpox can be infectious for up to 2 days before experiencing the rash that is associated with the virus. Control measures, such as restricted school attendance, participation in extracurricular activities, and instructing those who have symptoms to avoid contact with others, are designed to prevent unvaccinated people who have been exposed to the virus from infecting members of the general public while they are infectious.

"The Northern Kentucky Health Department has and will continue to follow the established medical guidance of the Centers for Disease Control and Prevention and other nationally acclaimed experts in infectious disease control in responding to the chickenpox outbreak among Assumption Academy students. Our first concern is always protection of the public health and implementing reasonable, medically-approved control measures that are designed to safeguard our region’s population, including those who are most vulnerable to the threat of infectious disease."