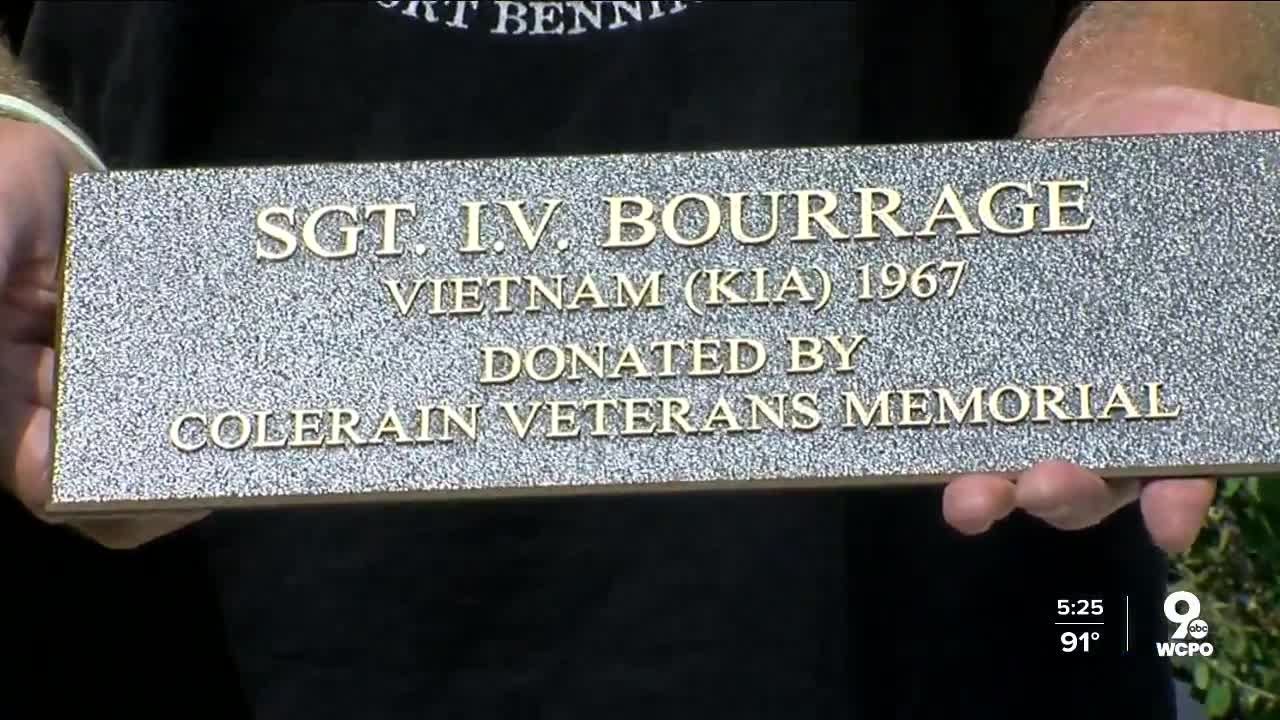 There’s a longstanding tradition known to every person who's ever served in the military; to never forget those who’ve sacrificed their life for this country. One local man knows that and that’s why he took on a mission to ensure a Vietnam War veteran killed in action will forever be remembered.

There’s a longstanding thread woven through each and every person who has ever worn a military uniform: to never forget those who’ve sacrificed their life in battle for this country. US Army veteran Chris Green knows that and that’s why he took on a mission to ensure a Vietnam War veteran killed in action will forever be remembered.

He was referencing a metal plaque in his hands featuring the name I.V. Bourrage, who was killed in an ambush during his second tour in Vietnam on Feb. 21, 1967.

Green knew of a plan to get a plaque and have it placed on a concrete block at the base of the flagpole at Houston Elementary. He decided to follow-up this past Memorial Day.

That’s when Green decided to put the wheels in motion -- he’s the president of the Colerain Veterans Memorial and through the memorial donated the funds and ordered the plaque.

The concrete block at the base of the flagpole was dedicated to I.V. Bourrage and other service members who fought in the Vietnam War. The plaque put in place at that time by Girl Scout troop 980 read, “In honor of our soldiers in Vietnam.” That service was held Nov. 11, 1968, and Bourrage’s daughter vaguely remembers the ceremony as a student at Houston elementary.

She doesn’t remember much at all of her father, and neither does her sister, Hartense Ahmed, because they were so young when he was killed. However, they both give much credit to their mother, who took on dual roles.

“Mom did a great job," Ahmed said. "It still hurts inside and that’s why this is really awesome for me right now to see all that Chris has done to get this started."

I.V. Bourrage and his wife, Evertie, had five children, and you might say their courtship started in elementary school in Mississippi.

“He used to send his sisters with a note for me,” said Evertie Bourrage. “He liked me from the beginning.”

She says the childhood crush continued through several school years. But after grade school they went their separate ways. Eventually I.V. Bourrage went off to the Marine Corps and Evertie took on her own path in life until Dec. 28, 1953.

“I was at my dad’s house on a Sunday. He came and he wanted to marry me,” said Bourrage. “So he asked my dad for my hand in marriage.”

She says they went to the courthouse on the next Wednesday and I.V. was off again with the Marine Corps by that following Saturday.

I.V. served from 1953 to 1967, and after his death, Evertie says, she wanted to best serve his family by having his body flown back to Mississippi.

“It was ten of them in the family and I knew if I had him buried in Washington they’d never be able to attend the gravesite,” she said.

After his funeral, Evertie loaded up the kids and headed to the Cincinnati area to be closer to her brother. She put money down on a home that she still lives in today. She enrolled her kids into Houston Elementary and that brings us back to the original ceremony on Veteran’s Day in 1968.

It’s been decades since that ceremony, and the family is looking forward to the ceremony on July 31.

“I’m thankful it’s finally happening,” Deborah Daniel said. “I regret my father's death, I’m thankful we still have my mom and I just look at God, what he does at this particular time being this is going to happen on July 31st, on my father's birthday.”

“It means a lot to me to get it done for the family,” said Green.

The plaque is more than a marker for Green, who hopes children and their parents along with the staff at Houston Elementary will take away a serious message from the tribute.

“The main thing I hope they take away is that freedom isn’t free," he said. "Freedom costs and I.V. gave his freedom for all of us.”

For Evertie, getting the chance to see her husband’s name permanently placed in tribute to his sacrifice means the world to her. She said Green and his efforts to get it done is nothing short of a higher power sending her an angel.

“That’s why I call him my brother,” Evertie said. “We have different skin color, but we all bleed blood, red blood. So that’s the way I look at – he’s my friend and I thank God for him.”

The ceremony to place the plaque to honor I.V. Bourrage will take place at 7 p.m. on July 31 at the flagpole at Houston Elementary School. Everyone is invited to come out to honor I.V. as well as other Vietnam War era veterans and service members.