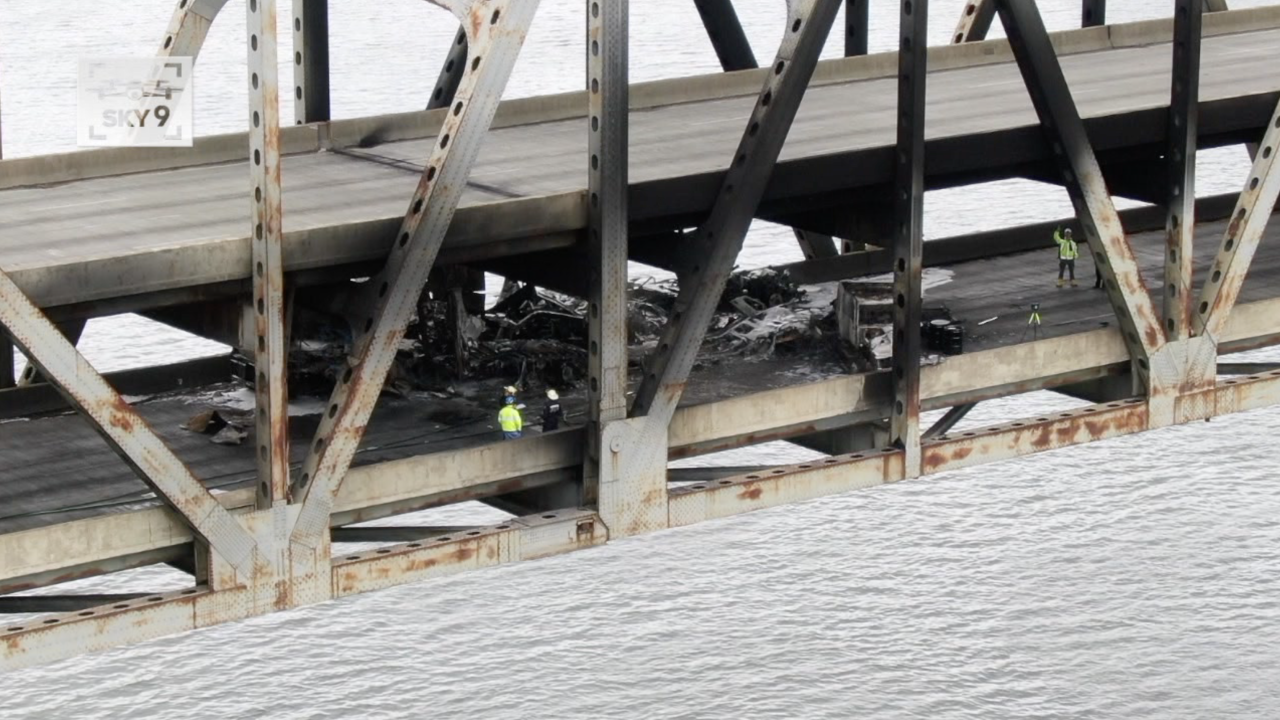 Michael Benedic
Crews survey the damage on the lower deck of the Brent Spence Bridge on Wedensday, Nov. 11, 2020. Two semitrailers crashed on the bridge, and the chemical fire that followed damaged the top deck, officials said. 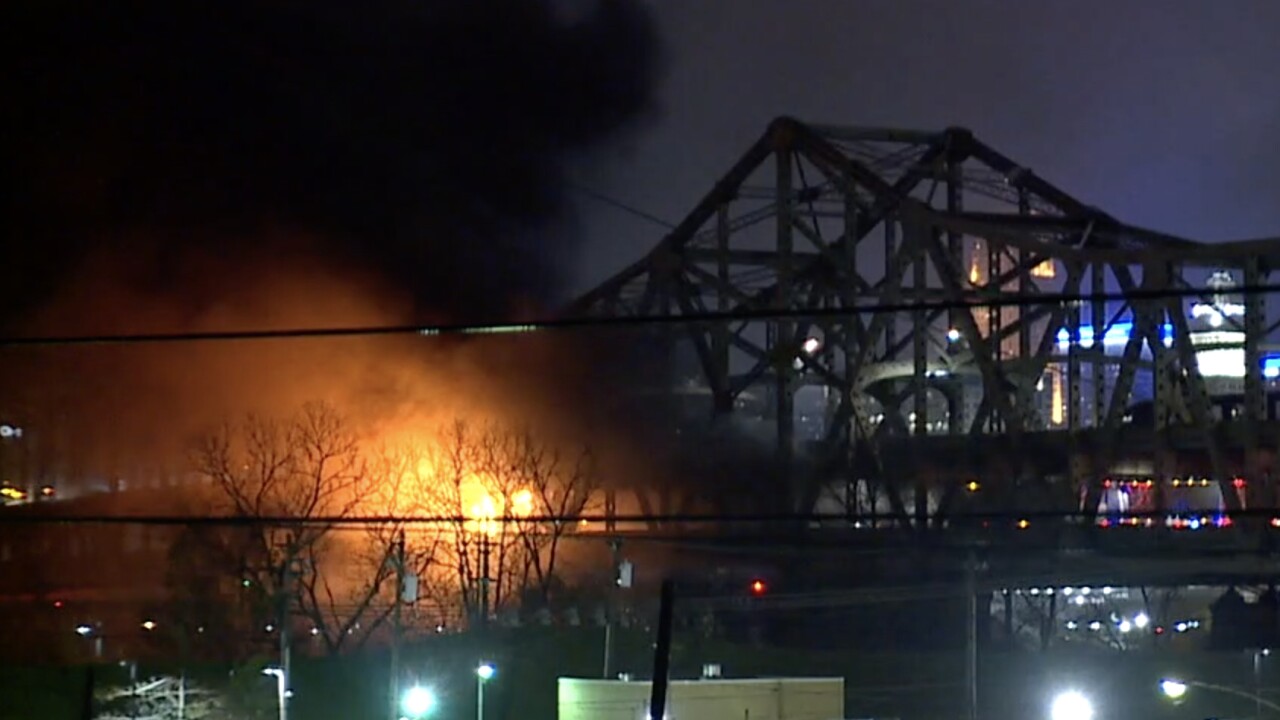 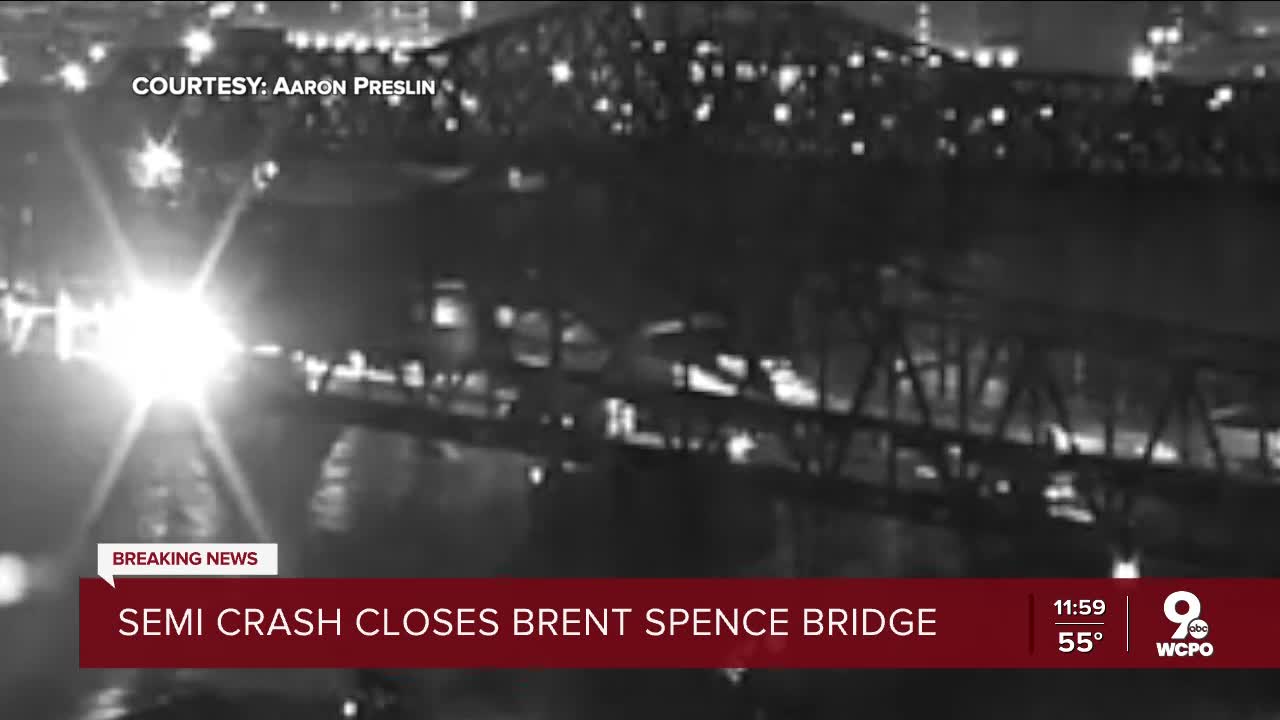 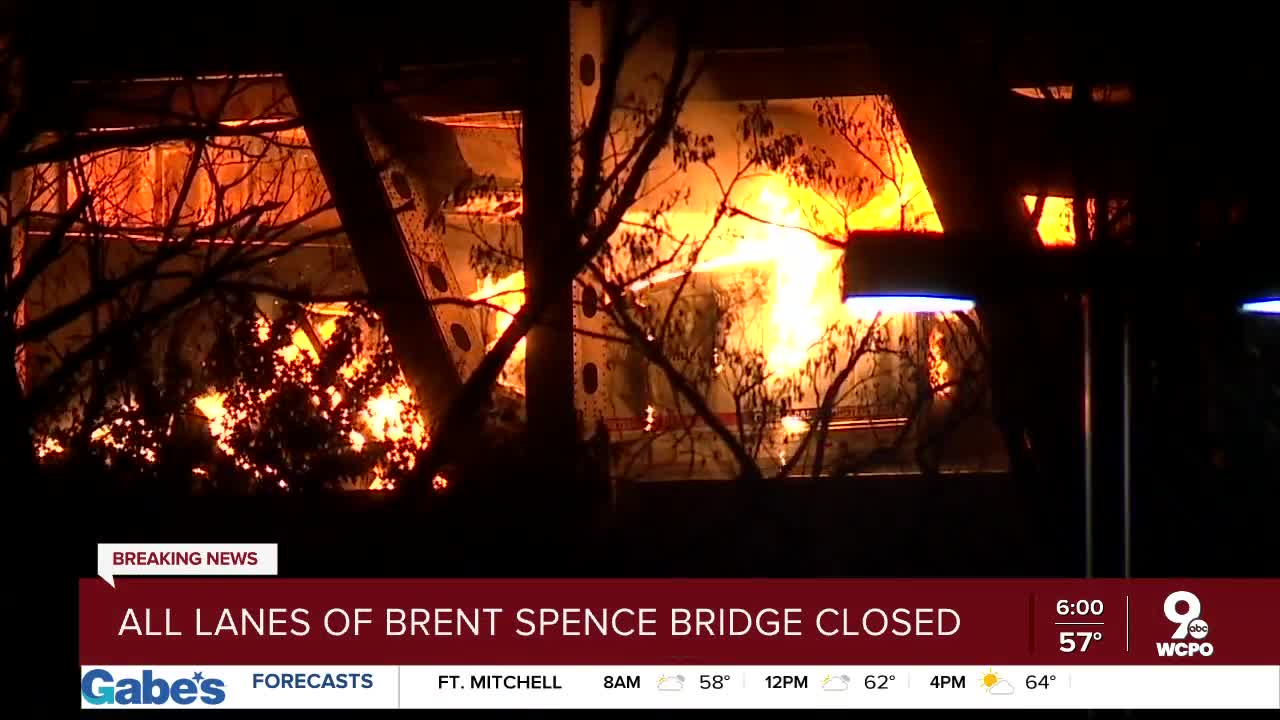 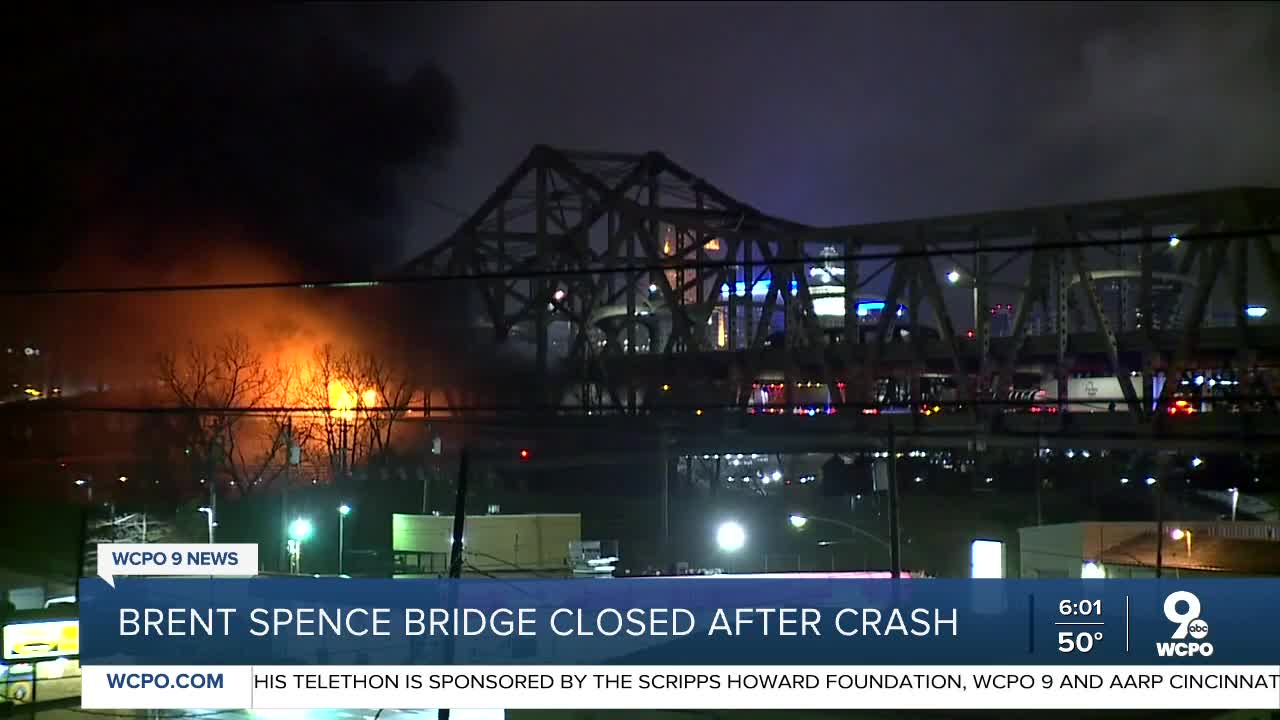 COVINGTON, Ky. — A state of emergency was declared in Kenton County Thursday by Judge Executive Kris Knochelmann after a fiery crash damaged the upper deck of the bridge Wednesday morning.

Two semitrailers crashed at about 2:45 a.m. in the northbound lanes on the lower deck of the bridge. One of the semis was carrying potassium hydroxide, which caused the fire to burn hotter and longer, sending thick, black smoke billowing over the top deck. It took crews about two hours to put the fire out.

“This is a very important bridge, not just for the region, but for the nation … but the safety of the public and of our and Ohio’s employees are absolutely critical,” Beshear said Wednesday.

Because of the bridge's importance, Knochelmann declared the state of emergency in order to get all of the agencies of Kenton Co. to cooperate with the Kentucky Transportation Cabinet as well as the Kenton County Office of Homeland Security Emergency Management.

The state of emergency also allows Knochelmann the ability to waive any procedures or formalities which might stand in the way of getting the bridge up and running quickly. This includes appropriation of public funds for the repairs among other things.

Beshear said a closure for "several days is optimistic" and added that it could take weeks. The Ohio River has also been closed to water traffic in the area.

A driver for Hogan Trucking Transportation & Logistics jackknifed in the northbound lanes on the lower deck, pinning an Old Dominion Freight Line semitrailer, police said. Beshear said "a second truck carrying potassium hydroxide crashed" into the semi that jackknifed. Rain and residual fuel from a previous crash was a factor, police said.

Daylight revealed charred pavement, blackened beams and mangled metal on the bridge. Watch Sky 9 video in the player below.

According to the Environmental Protection Agency, potassium hydroxide is used in the production of some soaps, batteries and paint removers and can be corrosive in moist air to some metals like aluminum, zinc and tin. The chemical fire did not pose a danger to the public, Lt. Col. Brian Valenti said, though a shelter-in-place was issued for a brief period after the crash.

BREAKING: Massive semi fire has the Brent Spence Bridge closed in both directions. Heavy black smoke is pouring over the Kentucky side. Expect multiple closures on 71/75. @WCPO pic.twitter.com/KpUNC1CSCd

The fire burned so hot it melted the semitrailers into bits and pieces. Wayne Smith, owner of Smith’s Towing, estimated crews wouldn't have the wreckage clear until at least 4 p.m.

"It's all going to be taken out in trailers. Nothing rolls. It's one of the — it is the worst melt down of a tractor trailer I've ever seen in my 30-year career. It's just a mess," Smith said.

Jim Gray, secretary of Kentucky Transportation Cabinet, said crews are committed to doing everything they can to restore the traffic and supply chain that is made possible by the Brent Spence.

The Brent Spence Bridge, opened in 1963, has been listed as "functionally obsolete" on the federal bridge registry since the 1990s. That's because it now carries more vehicles than it was originally designed to carry.

According to the Ohio-Kentucky-Indiana (OKI) Regional Council of Governments, the Brent Spence -- designed to carry 80,000 vehicles per day -- now carries between 150,000 and 200,000 every day. In 1986, the emergency shoulders were converted to travel lanes to accommodate the increasing traffic.

A major freight and trade corridor, the bridge was estimated to carry more than 3% of the national gross domestic product as of 2018. The Ohio River -- the continental United States' second-biggest river and another major conveyer of freight traffic -- is also closed to water traffic in the vicinity of the bridge. The bridge is the seventh-busiest freight junction in the nation, according to OKI CEO Mark Policinski.

If you are looking for the best options for detours to avoid delays due to the accident on the I-75 Brent Spence Bridge & the closure of north & southbound traffic on I-75 we suggest you follow @ODOT & https://t.co/e3RG1cSUEv for updates. For KY go to @KYTCGoKY https://t.co/tjqsDk0F9g

Beshear said his office would issue an emergency declaration so the state can qualify for federal funds.

The crash remains under investigation. WCPO has reached out to both trucking companies for comment.