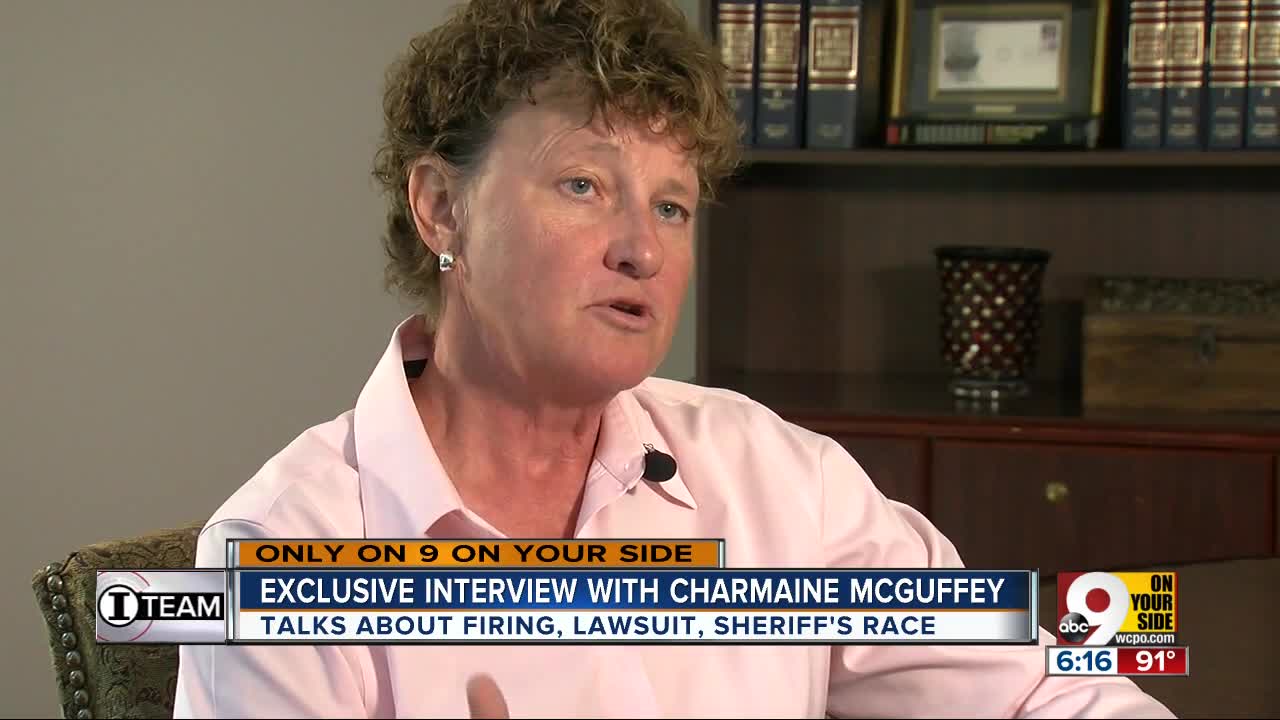 An election pitting Hamilton County Sheriff Jim Neil against former employee Maj. Charmaine McGuffey would be dramatic enough if she weren't also suing him. McGuffey declined I-Team reporter Craig Cheatham's first requests for an interview. After we published his initial investigation pointing out contradictions between McGuffey and Neil's public statements and their depositions, she got in touch with us.

CINCINNATI — Hamilton County sheriff hopeful Charmaine McGuffey didn’t know why she was fired from the Hamilton County Justice Center, she told WCPO investigators Wednesday. At least not right away. All she knew June 1, 2017, she said, was that her career had seemed to end in a blink — and the one to end it had been her longtime friend, incumbent Sheriff Jim Neil.

The why that emerged later was an internal affairs investigation concluding McGuffey, then the justice center’s first-ever major of court and jail services, created a hostile work environment and was dishonest when questioned about it. Investigators wrote she had demeaned her employees, engaged in favoritism and abused her power.

Neil, who declined to be interviewed for this story, previously said he offered her a civilian job and a pay cut. She refused. So he let her go.

McGuffey confirmed receiving the offer but said she hadn’t gotten the results of the investigation at the time.

“I had no way to defend myself because I had no knowledge of what was in that report,” she said.

And then she was fired.

She later alleged in a federal lawsuit — and in Wednesday’s interview — she had been targeted by Neil and his right-hand deputy based on her gender, sexuality and her criticisms of the way sheriff’s deputies used force against inmates.

The last bit is also an element of her campaign for sheriff, which she said would bring necessary change to Hamilton County’s justice system.

“I’ve watched people labor and languish in incarceration who really don’t need to,” she said. “There are so many ways that we can improve society, improve our community, improve reentry, and lessen the amount of people who have to languish in a hard incarceration model.”

She cited her role in the creation of the heroin recovery pod and men’s veteran pod, two jail communities that attempt to rehabilitate inmates with specific needs, as evidence of her commitment to humane, innovative models of justice.

Still, she knows the lawsuit and the “wildly unusual” circumstances of her rivalry with Neil could dog her throughout the campaign, drowning out attempts to address what she says are the more pressing issues. McGuffey said she didn’t make the decision to sue without careful consideration.

“There were many hours of sleepless nights,” she said. “In the end, I knew that I had to go with my heart, and I had to do what I felt was the right thing.”