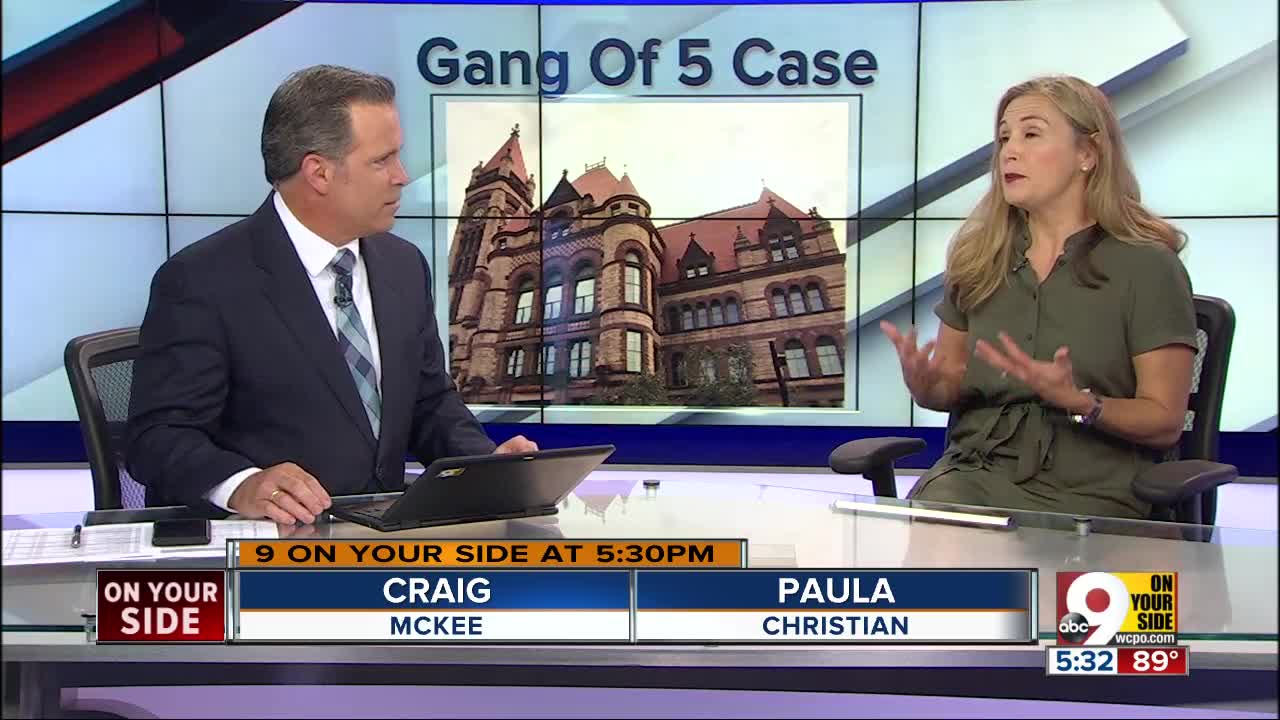 The city of Cincinnati is asking a federal judge to unmask the identities of two anonymous Hamilton County Democratic activists who sued the city last week saying their private texts to City Council's ‘Gang of Five’ were wrongly released to the public. WCPO I-Team reporter Paula Christian talks about what might happen and what's at stake.

CINCINNATI — A federal judge stepped into the messy "Gang of Five" text message case on Tuesday, trying to make sense of the complicated issues that extend beyond law and squarely into local politics.

“I don’t know what I’m going to do,” U.S. District Court Judge Michael Barrett said at the end of a one-hour hearing in which lawyers argued over a possible temporary restraining order for the city of Cincinnati. “This is the problem because I don’t know what’s in these emails … how can I decide this without viewing these things?"

Two anonymous Hamilton County Democrats sued the city last week, saying their private texts to City Council's Gang of Five were wrongly released to the city and the public.

John Doe 1 and John Doe 2 accuse the city of violating their constitutional rights and invading their privacy by potentially releasing text messages they sent to the five city council members for 10 months during 2018. They say the city illegally exposed intimate information about their lives — political associations, friendships, and private activities — when they released text messages that eventually were given to the local media.

They are asking the judge to give the lawsuit class action status, which could open it up to hundreds of others — friends, babysitters, doctors, neighbors, coaches, lawyers, family members and more — who may have sent text messages last year to the five council Democrats: Tamaya Dennard, Greg Landsman, Chris Seelbach, PG Sittenfeld and Wendell Young.

It could be a precedent-setting legal showdown over exactly which text messages sent to and from government leaders are public records as well as what types of communication are considered “city business” and therefore open to public view.

On Tuesday, Barrett only had to consider the first step in the case: Whether to issue a temporary restraining order that could stop the city from releasing any more text messages from the five council members until the case is resolved.

At the start of the hearing, Barrett seemed to side with the John Does.

“It’s her clients’ wishes I’m concerned about,” Barrett said pointing to John Does’ attorney Jennifer Kinsley. “Not yours,” he added, pointing to city attorneys Peter Stockpole and Emily Woerner.

However, as attorneys explained the history of the state case and the complexity of the issues spilling into the federal suit, Barrett seemed torn about how to handle it.

The long saga of the Gang of Five text messages began in April 2018 when attorney Brian Shrive sued the city and five council members for violating the Ohio Open Meetings Act. He accused them of conducting city business via a group text message chain about the fate of then City Manager Harry Black.

City lawyers told the five council members to provide their cell phones to Binary Intelligence, which created full digital copies of all of the content on the phones for the period from Jan. 1, 2018 to Oct. 23, 2018.

“Shortly after the Ohio Court of Claims released a decision finding that text messages on private cell phones can be public record if they discuss city business, the city received a deluge of requests,” Woerner wrote in a court motion.

“We got requests from practically everyone in this room,” Woerner said Tuesday, pointing to the reporters seated in the federal courtroom.

City attorneys say they never released any private communications through public records requests that didn’t discuss city business. Kinsley did not raise a specific example in which they had.

But the real issue at stake is what is considered “city business.”

Kinsley suggested the judge be the final decision-maker on communications that fall into this “gray area,” but Barrett said he didn’t want to do that.

If Barrett grants a temporary restraining order blocking the city from releasing text messages and emails, attorney Peter Stackpole said it would place the city in an unwinnable position. The city would get sued whether it released information or withheld it. Any possible action would be either a violation of state public records law or the judge’s restraining order.

Shrive’s attorney, Curt Hartman, said the solution should be to name the John Does in the lawsuit.

“My clients are unwilling to reveal their identities,” Kinsley said.

In addition to two John Does, Kinsley also filed affidavits on Tuesday from two Jane Roes who sent text messages to the five council members and worry their intimate information could be released.

Another potential plaintiff — Flora Young, who is Councilman Wendell Young’s wife — also filed an affidavit in which she worried about her personal communications with her husband being released.

“Mr. Young’s phone was deleted … so there’s no chance those messages will be released,” Stackpole said.

Ruehlman criticized Young for deleting emails and text messages from his phone but declined to hold him in contempt of court.

In the state case, Shrive and the city stood on opposing sides of the courtroom and the lawsuit. On Tuesday, they fought together and joined in a motion to unmask the John Does.

“Their motion speaks volumes about their intent to abuse state public records law to uncover private information about private citizens having nothing to do with legitimate government business," Kinsley wrote. "And it also proves Plaintiffs’ point that the City and Mr. Shrive are allies, given what appears to be a very real effort by the City and Mr. Shrive to harass and embarrass the associates of certain council members.”

Barrett did not say when he would rule. A decision will likely arrive in a few weeks.