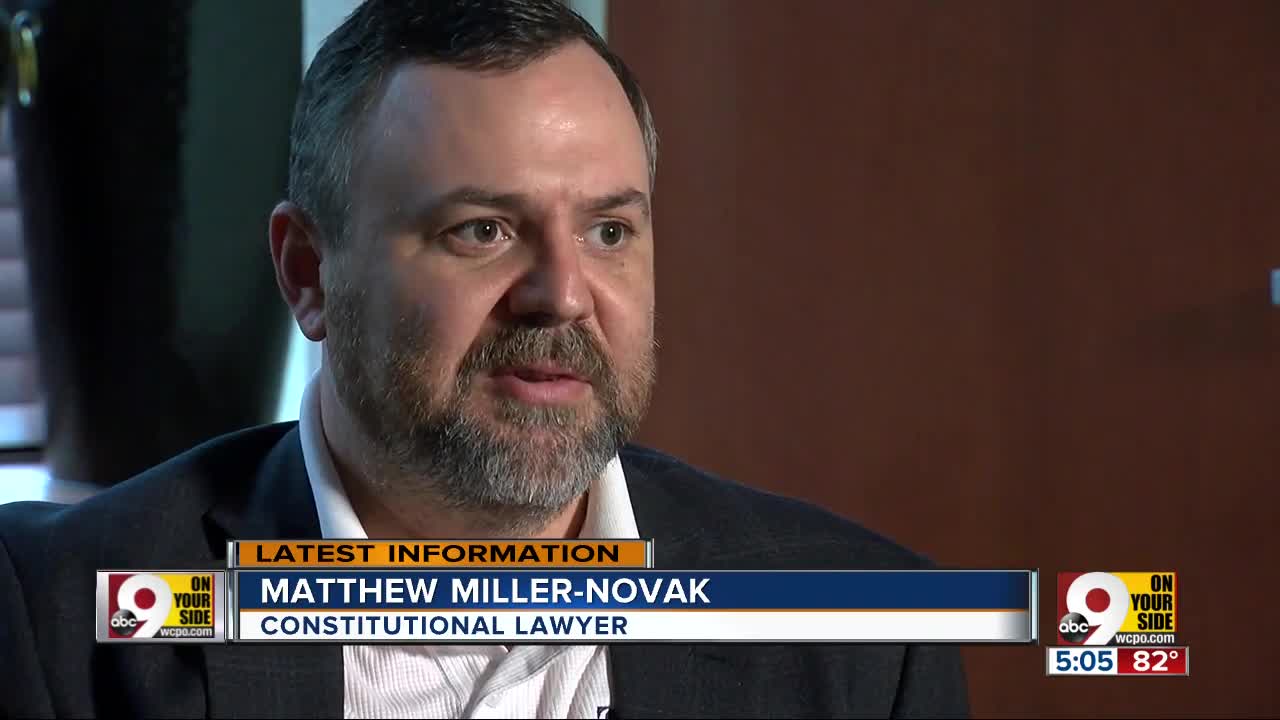 Two anonymous Hamilton County Democratic Party activists filed a federal lawsuit against the city of Cincinnati on Monday, claiming they were unknowingly caught up in the political fight over Cincinnati City Council ‘Gang of Five' text messages. John Doe 1 and John Doe 2 accuse the city of violating their constitutional rights and invading their privacy by releasing text messages they had sent to the five city council members in 2018. They say the city illegally exposed intimate information about their lives -- political associations, friendships, attitudes and beliefs, and private activities -- when they released text messages that eventually were given to the local media.

CINCINNATI — Two anonymous Hamilton County Democratic Party activists filed a federal lawsuit against the city of Cincinnati on Monday, claiming they were unknowingly caught up in the political fight over Cincinnati City Council ‘Gang of Five' text messages.

John Doe 1 and John Doe 2 accuse the city of violating their constitutional rights and invading their privacy by releasing text messages they had sent to the five city council members in 2018. They say the city illegally exposed intimate information about their lives -- political associations, friendships, attitudes and beliefs, and private activities -- when they released text messages that eventually were given to the local media.

They are asking U.S. District Court Judge Michael Barrett to give the lawsuit class action status, which could open it up to hundreds of others – friends, babysitters, doctors, neighbors, coaches, lawyers, family members – who may have sent text messages to the five council members last year: Tamaya Dennard, Greg Landsman, Chris Seelbach, PG Sittenfeld and Wendell Young.

It could set the stage for a precedent-setting legal showdown in federal court over exactly which text messages sent to and from government leaders are public records.

"This is a very interesting case," said constitutional lawyer Matthew Miller-Novak. "Somewhere out there, there is a line between government transparency and the right for government officials and their private associates to enjoy their own private existences, which includes gossip, scandal, love, loss, sadness, and all other intrigues normally hidden behind doors and walls. I am very interested to see where Judge Barrett draws that line."

The lawsuit also names Binary Intelligence and attorney Brian Shrive, who received the Gang of Five text messages from the city as part of his own lawsuit. The suit seeks an injunction to ban them from “possessing, reviewing, and disseminating their private communication" belonging to the two John Does.

The city and Binary Intelligence did not immediately return requests for comment. Shrive referred WCPO to his attorney, Curt Hartman.

“During a very heated and public battle over the nature of text messages exchanged by the five city council members on their cell phones, the city contracted with a digital forensics company, Binary Intelligence, to create mirror images of the council members’ phones. Those mirror images include private and constitutionally-protected communication between the council members and a whole host of non-governmental individuals … including John Doe 1 and John Doe 2,” according to the lawsuit filed by Jennifer Kinsley, a constitutional law professor at Northern Kentucky University.

"The lawsuit Professor Kinsley filed ... argues that people have an expectation of privacy when they are having private conversations, and they should not lose that right without the opportunity to challenge that loss just because they are a public official’s friend or family member," Miller-Novak said.

On April 9, 2018, Shrive sued the city and five council members for violating the Ohio Open Meetings Act by conducting city business via a group text message chain about the fate of then City Manager Harry Black.

City lawyers told the five council members to provide their cell phones to Binary Intelligence, which created full digital copies of all of the content on the phones for the period from January 1, 2018 to October 23, 2018, according to the lawsuit.

“Binary Intelligence provided the City law department with a digital copy of the cell phone downloads, but did not provide the council members themselves with copies of the content from their private cell phones,” according to the lawsuit.

The city released 626 pages of text messages between the five council members on March 7, which revealed gossip, name-calling, rumors of extramarital affairs, high-school level backstabbing and the secret side to how City Hall business really gets done.

“John Doe 1 and John Doe 2 both communicated with council members during that time period about a range of topics having nothing to do with official city business," according to the lawsuit. "These topics included purely social and friendly matters like parties, sporting events, and neighborhood gatherings; matters of campaign strategy and political organizing."

WCPO obtained text messages between former Cincinnati Mayor Dwight Tillery and the Gang of Five council members in June through a public records request made to the city.

In those messages, Tillery threatens civil unrest if Harry Black were forced out, belittles Mayor John Cranley, and demands funding for the nonprofit he founded, Center for Closing the Health Gap.

The identities of the two ‘John Does’ who filed the lawsuit are unknown and they want to stay that way. The lawsuit asks Barrett to allow them to “proceed in this action in pseudonym in order to protect their privacy and anonymity.”

Both ‘John Does’ live in Hamilton County and communicate “with various members of the Cincinnati City Council from time to time on matters of political and social concern, including matters of campaign strategy and Democratic party politics,” according to the lawsuit.

Both men also communicate “on a purely friendly basis about personal matters outside the scope of the political process,” to council members on their private cell phones, which is not paid for by the city, according to the lawsuit.

“John Doe 1 and John Doe 2 are chilled in their ability to communicate with the council members and other public officials for fear that their private expression will be seized, cataloged, read, and released by the government,” the lawsuit states.

They are also suing the city, Binary Intelligence and Shrive for invasion of privacy. The lawsuit accuses Shrive of disclosing information to “members of the news media.”

“The seizure, downloading, review, recording, possession, and public dissemination of plaintiffs’ private information by the government and its cohorts would shock the sensibilities of and would be highly objectionable to the average person,” the lawsuit states. “The public dissemination of plaintiffs’ private information was intentional, not accidental.”

They are asking Barrett to award monetary damages for violating John Does' civil rights.