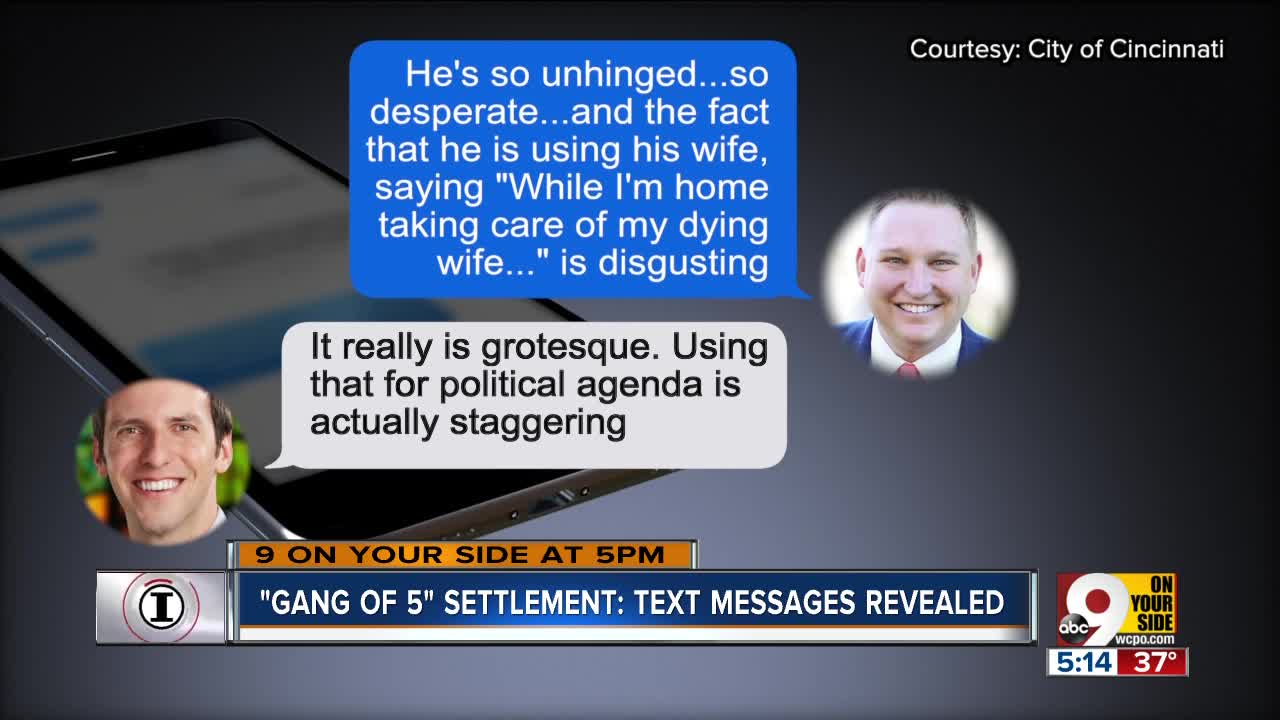 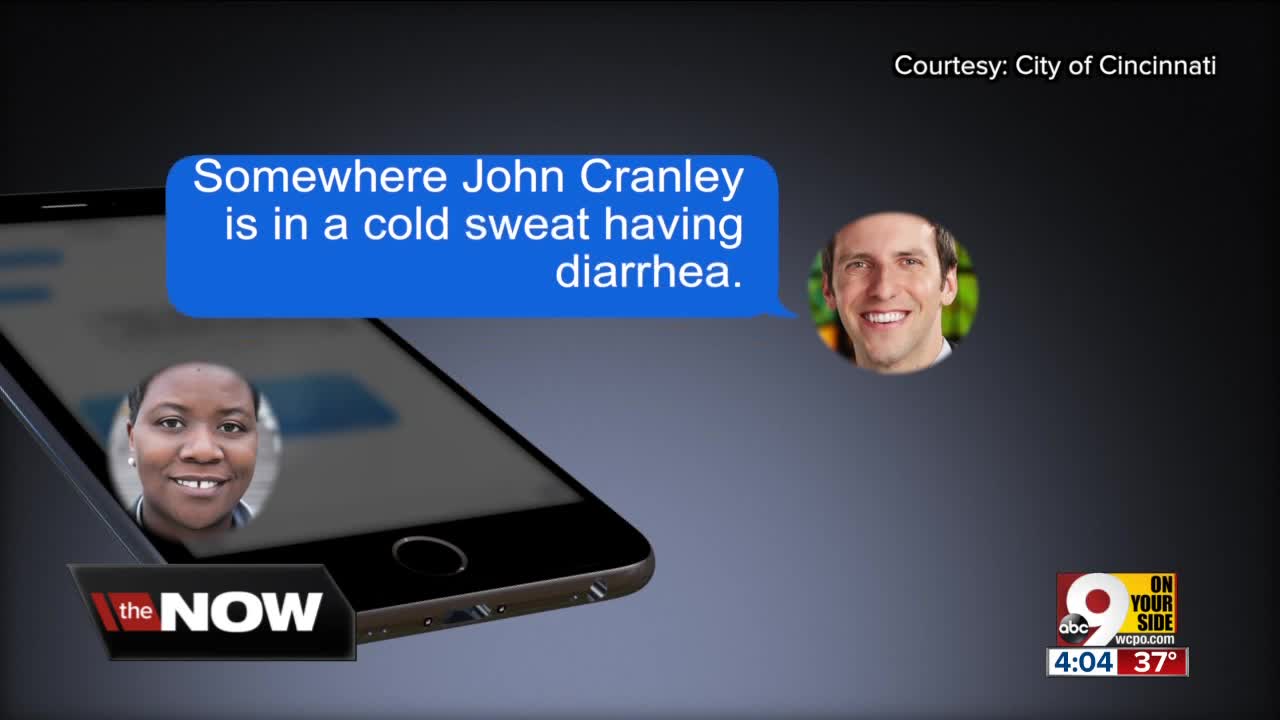 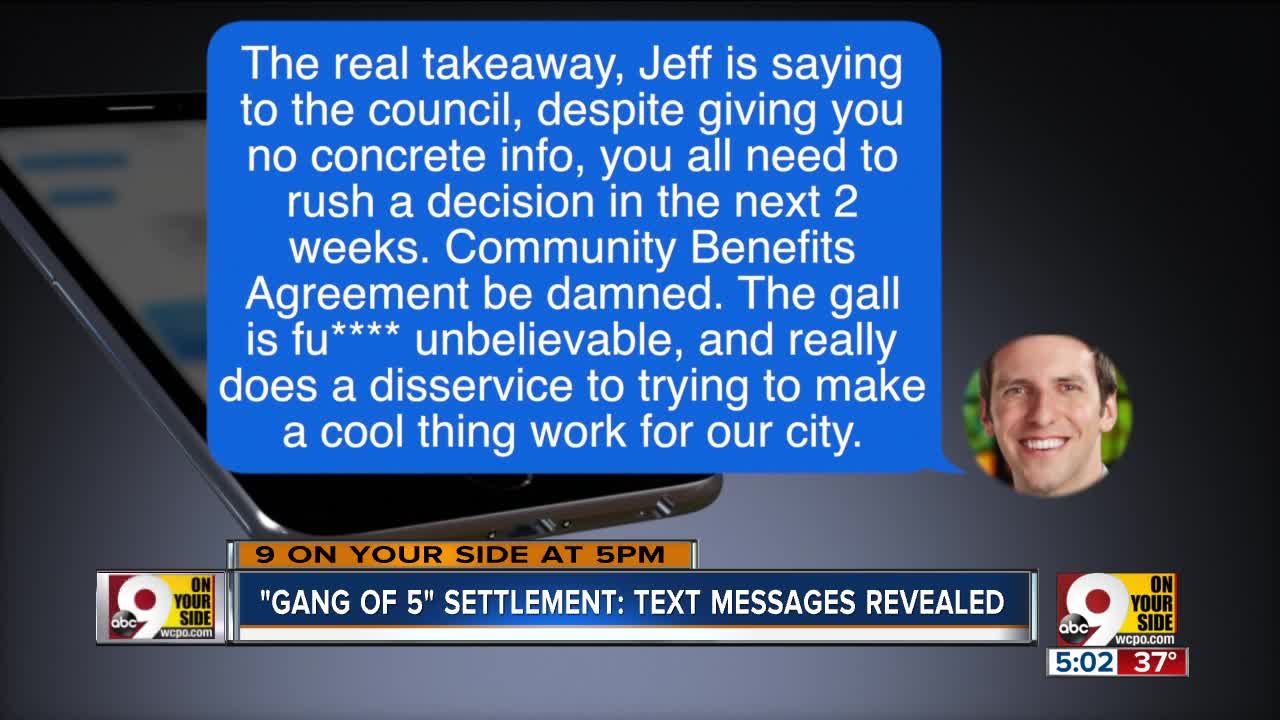 CINCINNATI — The city of Cincinnati released 626 pages of text messages between five council members on Thursday which reveal gossip, name-calling, rumors of extramarital affairs, high-school level backstabbing and the secret side to how City Hall business really gets done.

“Somewhere John Cranley is in a cold sweat and having diarrhea,” Councilman P.G. Sittenfeld wrote in a text message to Councilwoman Tamaya Dennard on March 16, 2018 — the day the five council members skipped a special session of council in order to plot a secret strategy over the crisis at City Hall involving then-city Manager Harry Black.

The text messages divulge the private lives of some of the five council members: Their love of Taylor Swift, Golden Girls trivia, Wheel of Fortune and patio cocktails.

However, they also reveal the scope of official business the five Democratic council members regularly conducted behind the scenes during private meetings and phone calls as well as through text messages and emails.

They even discussed how they planned to vote in advance of city council meetings.

“How are we all voting on (Jim) Goetz today," Chris Seelbach texted the group on Jan. 31, 2018, in advance of a city council vote adding Goetz to the park board.

The five council members decided how to divide up calls to the media and which reporters were the most favorable to their causes.

Topics discussed via text included who to nominate for Black History Month proclamations, how much to fund the Center for Closing the Health Gap, how to handle the homeless camp situation that dominated summer 2018, FC Cincinnati, responsible bidder, SORTA board appointments and an ordinance banning bump stocks.

They also criticized other council members for an alleged affair, how they could afford a $500,000 house as a former Uber driver and using a sick spouse as a political excuse.

“The fact that he is using his wife, saying, 'While I’m home taking care of my dying wife….' is disgusting,“ Seelbach texted, referring to Councilman Christopher Smitherman, whose wife, Pamela, died of cancer in January after a two-year battle with the disease.

“It really is grotesque," Sittenfeld texted. "Using that for a political agenda is actually staggering."

“Yup. As I’ve said for six years, both Cranley and Smitherman seem to have serious mental illness,” Seelbach wrote back.

Smitherman, in response to these comments, said in a statement,

There are cancer patients all over this region fighting for life with caregivers who love them dearly. No person can ever understand the magnitude of a loss of this kind unless you have walked in these shoes... As a family we do not wish this crisis on our worst enemy. There is nothing political about death. Nothing!

Most of the group’s criticism fell on Mayor John Cranley.

“Cranley creates such a toxic environment,” Seelbach said in a March 7, 2018 text.

“It’s not good," Landsman texted. "But power has shifted and I hope he’s beginning to realize that. Would make life and problem-solving a whole lot easier if he did."

“I just don’t get him. Maybe just the least self-aware person on this planet,” Seelbach texted about Cranley.

Judge Robert Ruehlman approved a final settlement on Thursday that required those council members to release their remaining texts and emails sent between Jan. 1 and Oct. 25, 2018.

The city spent $177,000 on this text message case, between lawyer fees and costs, and settlement money.

That may not be a large sum to wealthy council members, but to sanitation workers, snow plow drivers, police and firefighters, “it is a lot of money,” Ruehlman said.

In a large chunk of the text messages, the five council members debated whether Black should resign and how much severance he should be paid.

“Why the hell should we have to pay $600k to settle a personality dispute between two grown men,” Sittenfeld wrote to Landsman on March 15, 2018, referring to the dispute between Cranley and Black.