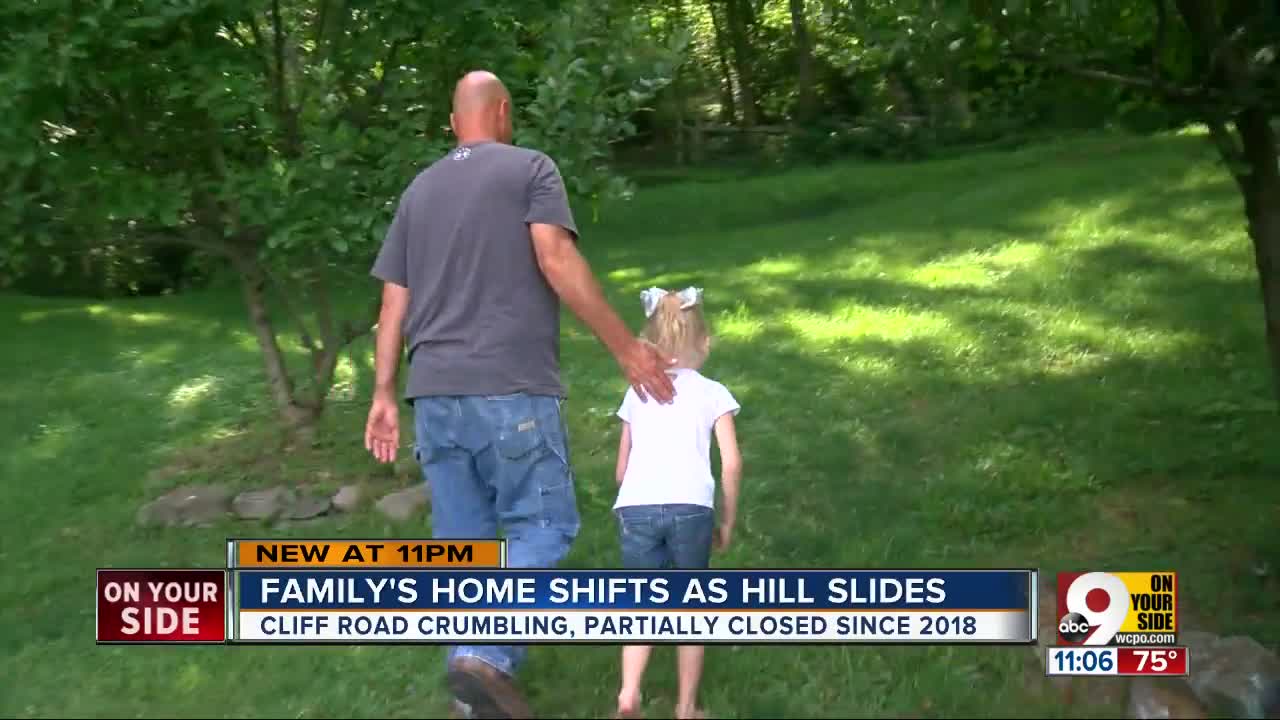 Steve Redding’s Brower Road home of 20 years doesn’t stand up as straight as it used to; the slanting support beams in the basement are proof enough of that. The ground behind it, too, has lumped and buckled into new formations. It hasn’t been a 20-year process, he added Friday. It’s been one.

Steve Redding’s Brower Road home of 20 years doesn’t stand up as straight as it used to — the slanting support beams in the basement are proof enough of that. The ground behind it, too, has lumped and buckled into new formations.

This rearrangement hasn’t been a 20-year process, he added Friday. It’s been the work of one.

“That up there is unsafe as it can be,” he said, indicating the crumbling hillside overlooking his property. “It's pretty devastating up there."

The slipping hill and the appropriately named Cliff Road at its summit are known infrastructure concerns in Hamilton County, according to county officials. Only half of the latter has been open since September 2018, when storms washed out portions of the outer lane.

Redding said he doesn’t think it should be open at all.

“If it does decide to get any worse, it’s going to kill someone,” he said. “It’s not going to hurt someone. Someone’s going to get killed up there, either running off of it or it collapsing the rest of the way.”

He believes the deterioration of Cliff Road has created a snowball effect that’s changed the landscape around his own home, making the hill — he worries — potentially as dangerous at the bottom as at the top.

And in April, he said, the county approved a project that accelerated the slippage: The installation of several asphalt storage tanks further down Brower Road.

To facilitate the installation for Greater Cincinnati Asphalt, a local paving company, “they cut the hillside out behind there and piered it,” Redding said.

The county’s approval of the project noted it could cause minor erosion, according to county documents. Redding said he believes it’s caused much more than they predicted, and he’s afraid of what might happen to his home if it continues.

“We don’t know what we’re going to do,” he said of his family. “We’ve been looking for houses and stuff, but … it’s hard to leave with a mortgage on this house and then go get a loan and stuff for a mortgage on another home.”

Hamilton County officials said they were investigating his claim that the Greater Cincinnati Asphalt project had contributed to the ongoing slippage.

In the meantime, other officials said they were looking for a longterm fix for Cliff Road above Redding’s home. Speaking with WCPO in May, Hamilton County Engineer Ted Hubbard said his department had already requested funding from FEMA and the Ohio Public Works Commission.

It’s still not clear, however, what will happen to Redding’s home.

Greater Cincinnati Asphalt did not return a request for comment Friday night.