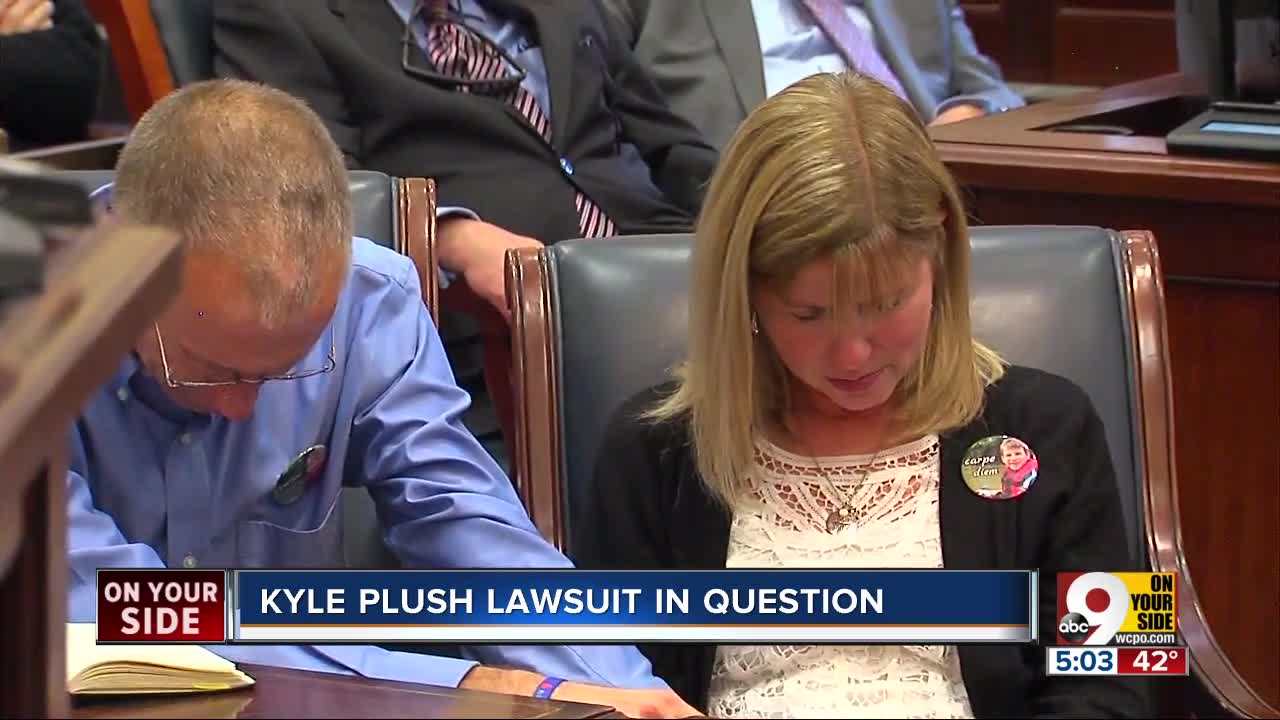 A judge will decide on Jan. 22 whether to dismiss a wrongful death lawsuit filed by the family of a teenager who died in a van after he called 911 for help. Kyle Plush, 16, called 911 twice for help after he became trapped in the back of his family's van near Seven Hills High School in 2018. He died of asphyxiation when no one rescued him in time. The Plush family filed a wrongful death lawsuit against the city and several city employees.

CINCINNATI — A judge will decide on Jan. 22 whether to dismiss a wrongful death lawsuit filed by the family of a teenager who died in a van after he called 911 for help.

Kyle Plush, 16, called 911 twice for help after he became trapped in the back of his family's van near Seven Hills High School in 2018. He died of asphyxiation when no one rescued him in time. The Plush family filed a wrongful death lawsuit against the city and several city employees.

Judge Robert Ruehlman heard statements from the Plush's attorney and the city's attorney on Thursday in Hamilton County Court.

What does the Plush family’s lawsuit allege?

The lawsuit, filed in August, claims the two 911 call takers who took Plush's calls and the two police officers who responded to the area where Plush's body was later found “acted negligently, recklessly, wantonly, willfully, and with deliberate indifference” in failing to protect Kyle the day he died.

"The city wants to close its doors to the Plush family," Gerhardstein said in court on Thursday. "We ask that you keep the doors open."

"In order for the city to have any credibility about their EEC action plan or reforms, they need to be honest about what happened. They failed our son," Kyle's parents say in the suit.

Who is named in the lawsuit?

The suit names as defendants the two Emergency Communication Center employees who took Kyle's calls — Stephanie Magee and Amber Smith — and the two Cincinnati police officers who responded to the scene but never left their car and didn't locate him, Officers Edsel Osborn and Brian Brazile.

Why did the city file a motion to dismiss?

On Oct. 8, the city filed a motion to dismiss the lawsuit, claiming the employees named in the suit are protected by government immunity.

"The response to 911 calls by the call takers and police officers is a core governmental function to which governmental immunity applies," the city's motion for dismissal reads. The motion continues and says the claims against the city "lack merit."

"The individual defendants are entitled to immunity because none of their actions rose to the level of a perverse disregard of a known risk," said deputy city solicitor Peter Stackpole In court Thursday."They did not act recklessly."

What are the details of the lawsuit?

Magee, the first call taker, “chose to exclude critical information when passing the call to dispatch and chose not to properly classify the call as trapped and in need of rescue,” according to the lawsuit.

"If she had classified it as a call for rescue, that would have sent fire and EMTs," Gerhardstein said.

The suit also says Magee had Kyle’s precise location via wireless mapping technology, but she did not give the location to authorities.

The second call taker, Smith, treated Kyle’s call as a “‘silent call" and improperly enabled the TTY function, knowing it reduced the volume of Kyle’s voice, and then she chose not to play back the call to hear what he said,” the lawsuit said.

"Kyle’s saying a lot of really important things like, 'I’m in a gold Honda Odyssey, I’m in the sophomore parking lot, I’m going to die, tell my mother I love her,'" Gerhardstein said.

“She never even advised dispatch or the officers still on the scene that she had received a second call from Kyle or that he stated he was almost dead,” the suit said.

The responding police officers, Osborn and Brazile, did not search the entire Seven Hills parking lot although they knew the caller was stuck inside a van there, according to the lawsuit. The officers left the scene without using a map on their computers and cell phones with the address they were given, the suit said.

“Those deficiencies directly led to the failure to direct police officers to Kyle’s vehicle,” the suit said.

When Black was hired as city manager in 2014, he described the 911 system as "a mess" and "bordered on dysfunctional," according to the lawsuit.