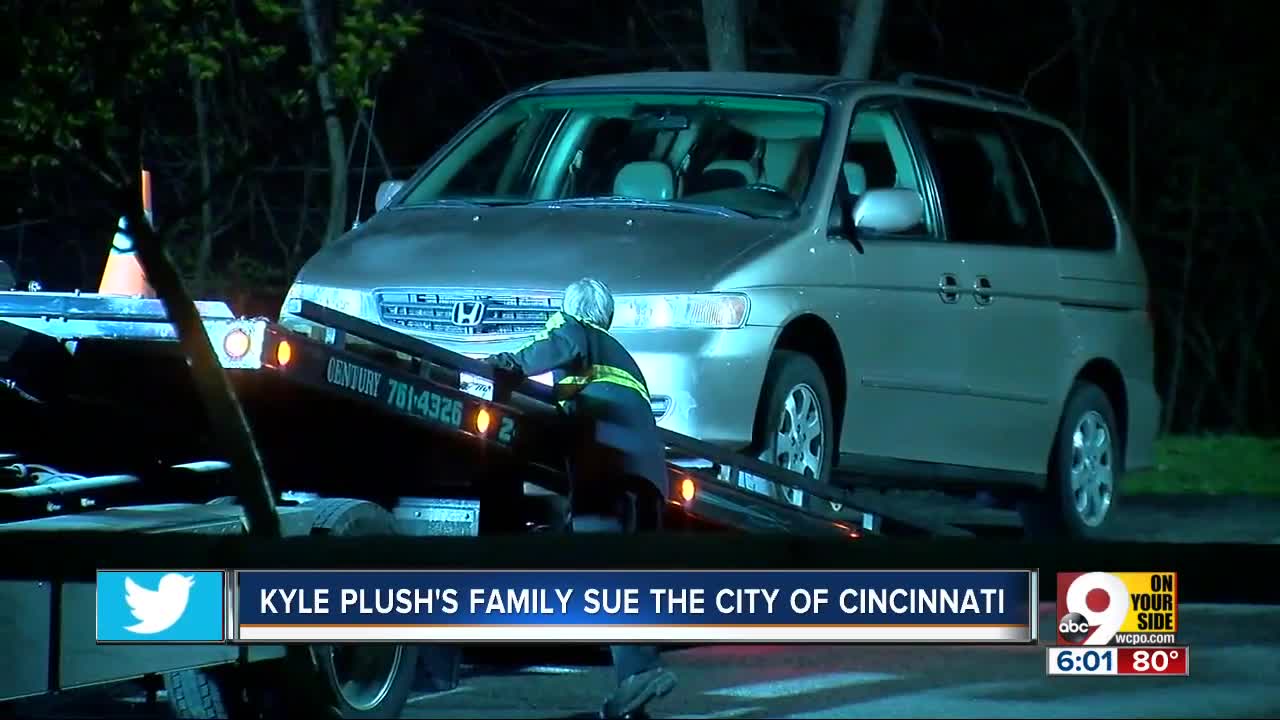 The parents of Kyle Plush are suing the city, two 911 call takers and two police officers claiming they “acted negligently, recklessly, wantonly, willfully, and with deliberate indifference” in failing to protect Kyle the day he died. Kyle's parents and their attorney, Al Gerhardstein, claim the city's investigation didn't go far enough and they're still looking for answers. "In order for the city to have any credibility about their EEC action plan or reforms, they need to be honest about what happened. They failed our son," Kyle's parents say in the suit. "We’re litigating on their behalf to find the answers to all the problems that led to the death of their son," Gerhardstein said at a Monday news conference. 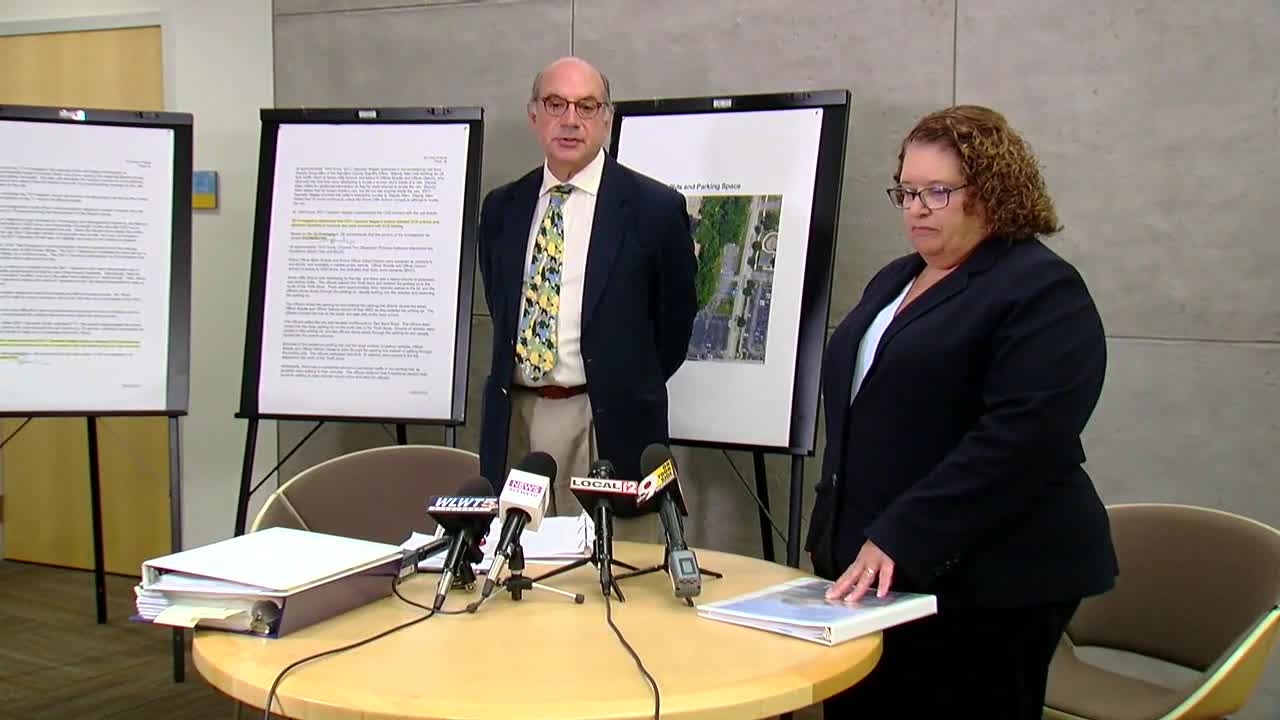 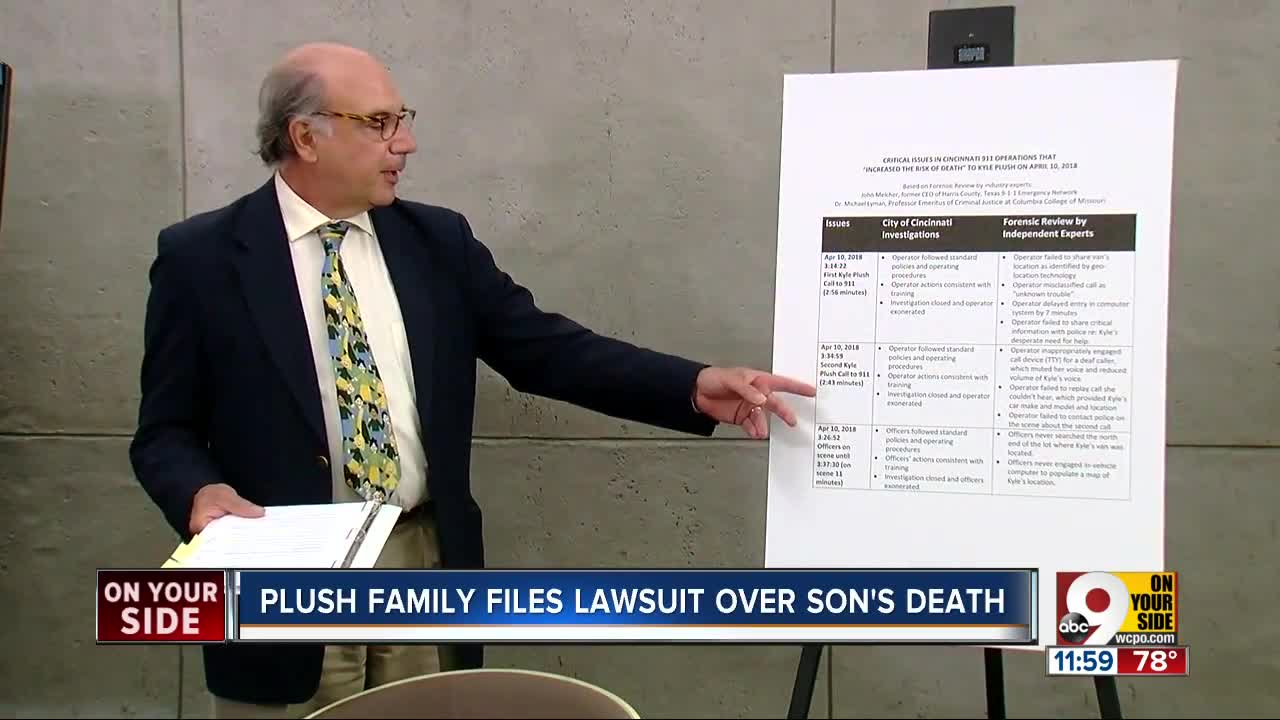 CINCINNATI — The parents of Kyle Plush are suing the city, two 911 call takers and two police officers claiming they “acted negligently, recklessly, wantonly, willfully, and with deliberate indifference” in failing to protect Kyle the day he died.

"In order for the city to have any credibility about their EEC action plan or reforms, they need to be honest about what happened. They failed our son," Kyle's parents say in the suit.

"We’re litigating on their behalf to find the answers to all the problems that led to the death of their son," Gerhardstein said at a Monday news conference.

"They (Kyle's parents) had gone to the city, tried to get direct answers, went to many meetings and got no clear information about what led to their son's death.

"When they screw up, we expect them to fess up," Gerhardstein said.

Kyle, 16, called 911 twice for help on April 10, 2018, when he became trapped in his minivan after the backseat collapsed on him in the parking lot of Seven Hills School. He died of asphyxiation when no one rescued him in time.

Two experts hired by the family claim there was a systemic failure by the city. The suit disputes Police Chief Eliot Isaac's internal investigation report, which largely exonerated the operators, dispatchers and officers of wrongdoing. (The report concluded only that officers violated policy by turning off their body-worn cameras.)

SEE responses from the city and the FOP below.

The suit names as defendants the two Emergency Communication Center employees who took Kyle's calls - Stephanie Magee and Amber Smith — and the two Cincinnati police officers who responded to the scene but never left their car and didn't locate him, Officers Edsel Osborn and Brian Brazile.

Watch the full conference in the player below:

Magee, the first call taker, “chose to exclude critical information when passing the call to dispatch and chose not to properly classify the call as trapped and in need of rescue,” according to the lawsuit.

"If she had classified it as a call for rescue, that would have sent fire and EMTs," Gerhardstein said.

The suit also says Magee had Kyle’s precise location via wireless mapping technology, but she did not give the location to authorities.

The second call taker, Smith, treated Kyle’s call as a “‘silent call" and improperly enabled the TTY function, knowing it reduced the volume of Kyle’s voice, and then she chose not to play back the call to hear what he said,” the lawsuit said.

"Kyle’s saying a lot of really important things like, 'I’m in a gold Honda Odyssey, I’m in the sophomore parking lot, I’m going to die, tell my mother I love her,'" Gerhardstein said.

“She never even advised dispatch or the officers still on the scene that she had received a second call from Kyle or that he stated he was almost dead,” the suit said.

The responding police officers, Osborn and Brazile, did not search the entire Seven Hills parking lot although they knew the caller was stuck inside a van there, according to the lawsuit. The officers left the scene without using a map on their computers and cell phones with the address they were given, the suit said.

"They were on scene for 11 minutes, they drove into every single parking lot except this one," said co-counsel Jennifer Branch.

"The officers were given all the information they needed, even though they could have been given so much more."

The lawsuit alleges the city's emergency response system has a history of failing to timely dispatch responders, failing to locate callers and delaying dispatch in response to calls.

“Those deficiencies directly led to the failure to direct police officers to Kyle’s vehicle,” the suit said.

When Black was hired as city manager in 2014, he described the 911 system as "a mess" and "bordered on dysfunctional," according to the lawsuit.

There were at least nine system wide failures between June 2016 and March 2017, resulting in more than seven hours in which the system was totally down, the suit said.

The lawsuit alleges Black and the city were aware of the following issues by April 2018: inadequate staffing, inadequate training on the TTY system, the CAD system freezing, system wide outages, lack of training on use of wireless location technology and lack of training and supervision of police officers in the field.

Two days after Kyle's death, Mayor John Cranley said "the problems with management, supervision and technology have been reported at the 911 center for years ... this tragedy may ultimately suggest the problems have not been resolved or that not enough changes have been made," the lawsuit said.

The preliminary report also says Smith knew Kyle could die based on what he told her in his second 911 call. Smith disregarded the risk to Kyle and “acted unreasonably” when she heard his voice but treated his call as a silent call, the report said. Smith turned on the TTY function, did not play back the call, failed to notify a supervisor and failed to tell officers about the call, the report said. The suit alleges Smith was not adequately trained on the TTY function, which caused her to mishandle Kyle’s call.

The family is seeking $25,000 in damages, according to the lawsuit. Gerhardstein said the number reflects the jurisdictional amount they had to allege.

"We do not let big numbers distort the complaint," he said. "We will suggest verdict amounts when we try the case."

The suit is not amount money, said Branch.

Response from the Fraternal Order of Police

In a statement, FOP President Dan Hils defended the officers:

"Rarely has there been an example of such unrealistic expectations for first responders to have had the ability of 20/20 hindsight. The police officers involved did not receive sufficient information to surmise a life was in danger. The Cincinnati police officers involved were not negligent and shouldn't be named in this lawsuit. The FOP and our legal team will be 100% in defense of these members.

Response from the city

"The City of Cincinnati continues to express its condolences to the Plush family for the tragic loss of their son, Kyle. Every day since April 10, 2018, the City has worked to evaluate, review and enhance the ways in which we respond to emergencies. This includes adding Smart911 and RapidSOS technologies at the Emergency Communications Center, improving the ability of E911 Operators to locate callers in distress, and increasing staffing at the ECC. As a result, the ECC exceeds state and national standards for 9-1-1 call answering. We have developed and implemented these changes in a transparent and collaborative manner.

"Our first responders, both sworn and civilian, have dedicated their lives to protecting the public and are committed to faithfully executing their duties.

"We were notified today that the Plush family has filed a lawsuit against the City of Cincinnati. The City Solicitor’s Office will defend both the City and its employees and officials named in the suit. Given that there is active litigation, there will be no further comment from the Administration at this time."

"Tragedies happen and sometimes it's just multiple circumstances that occur, and what I promised to the Plush family is that we would look at all of the different issues that had happened and try and fix them so that they could not happen again,” Murray said.

A preliminary investigation revealed technical problems and human error may have played roles in first responders' failure to locate Plush. Smith, the 911 operator who took Plush's second call, said she couldn’t hear him when he described the make, model and color of the minivan where he was trapped and suffocating.

About a month after Kyle’s death, City Manager Patrick Duhaney admitted operators and officers could've done more to help save him.

Mayor John Cranley called Isaac's report "incomplete" and said he wanted to bring "moral clarity" to the city's failures. Those were threefold, he said: Operators should've listened to recordings of Plush's 911 calls and turned up the volume, firefighters should've been dispatched, and officers should've gotten out of their patrol vehicle.

Hamilton County Prosecutor Joe Deters said in November 2018 that no charges would be filed in Kyle's death.