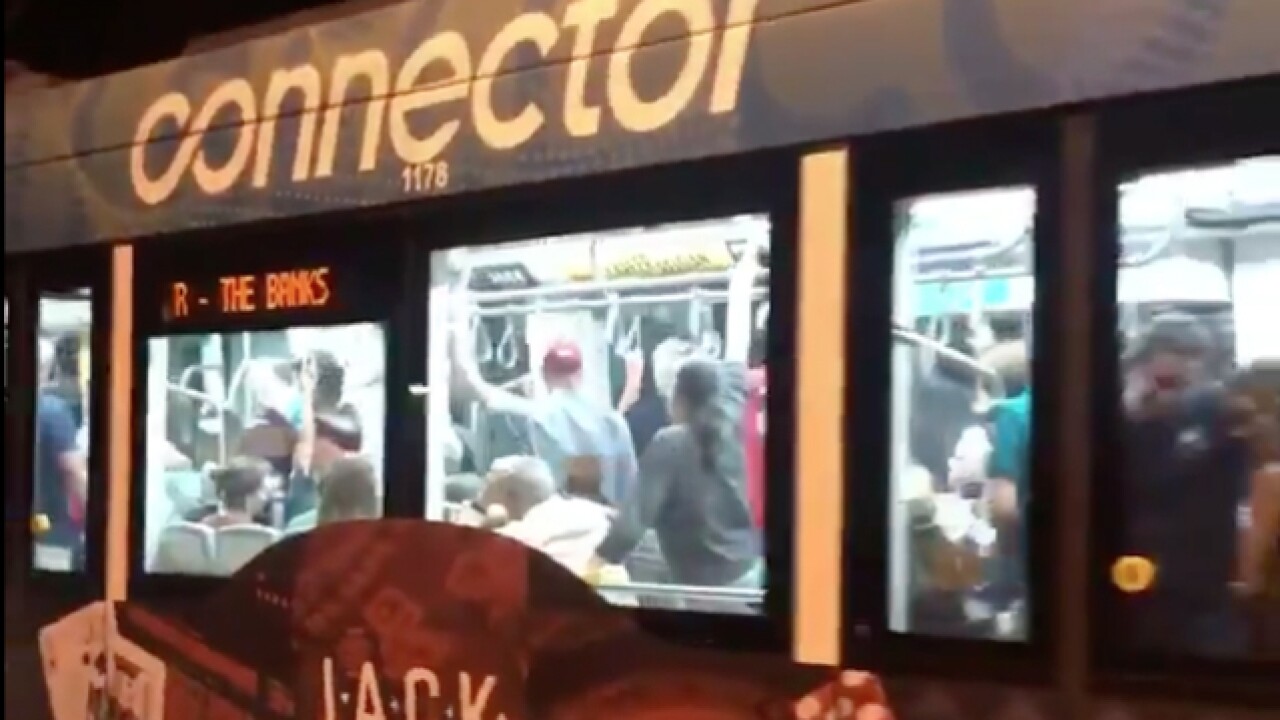 Copyright 2017 Scripps Media, Inc. All rights reserved. This material may not be published, broadcast, rewritten, or redistributed.
<p>Big crowds at BLINK light, art and music festival meant standing room only and long waits for some on the Cincinnati Bell Connector. (Courtesy Twitter user @Cincystreetcar)</p>

CINCINNATI -- When BLINK's organizers set out to plan and design the four-day light, art and music festival, they immediately had the streetcar in mind: The 21 outdoor light-art installations were all situated along the streetcar's 20-block loop through Over-the-Rhine, Downtown and the Banks.

One could even say the streetcar was itself a character in the light show production, rolling by with its familiar ding-ding as visitors toured the city streets.

What leaders didn't expect, though, were the immense crowds that poured into the urban core last weekend, estimated at roughly 1 million people, and what that would mean for the show's star character.

It was the largest crowd drawn by a single event in the city's history -- ever. These large crowds meant more big numbers: The streetcar logged roughly 27,000 rides throughout the festival, far exceeding average weekend ridership.

But, while transit advocates are celebrating the high ridership, they also said it exposed a persisting struggle for the streetcar. Since its inception, the streetcar has struggled to keep up with high-capacity, crowded events.

Cameron Hardy, with the Better Bus Coalition, attended this weekend's events, but when asked if he used the streetcar: "No, too packed!"

The crowds were evident on social media.

On the one hand, this meant a lot of new riders.

"We saw a lot of first-time riders coming out and exploring the city," said Brandy Jones, spokesperson for the Southwest Ohio Regional Transit Authority, which oversees streetcar operations.

On the other hand, that number could have been higher, as the crowded streetcars meant many were left waiting long waits just to board. Some -- like Hardy -- chose not to ride at all.

"Everything streetcar that I'd seen was too packed, and I said 'It's just better to walk,'" he said.

The streetcar's ongoing struggle with its ticket vending machines also reared its head during BLINK, with multiple machines malfunctioning or simply shutting down.

"We had technicians out along the route all weekend ready to handle any (ticket vending machine) issues that arose," Jones said.

The root of the problem, for Hardy -- who commutes primarily by Cincinnati Metro bus -- comes down to Downtown's traffic design.

"It took me 37 minutes to get from right here at Fifth and Main to Main and Liberty," Hardy told WCPO. It's normally a 10-minute bus ride, he said.

Jones confirmed that congestion is a frequent cause for headaches along the streetcar route.

"Unfortunately, the streetcar operates in mixed traffic, so we are at the result of, whenever there are blockages and cars blocking the track, we work with the police as best we can," she said.

Perhaps as an omen, this reality hit home quite quickly during the event, when a crash involving a Metro bus caused the streetcar to shut down for three hours during BLINK's kick-off parade Thursday night.

Hardy suggested that, for big events like this, the city could temporarily designate certain lanes for streetcar travel only.

City Council member and transportation committee chair Amy Murray wouldn't commit to the idea of transit-only traffic lanes for special events, but did point out just how unique BLINK really was.

"I think BLINK was such a one of a kind, unique thing to do in this city that people didn't know how many people would show up there, or the effect it would have on traffic patterns," she told WCPO Monday.

The city recently launched a traffic signal study throughout Downtown and Over-the-Rhine, in order potentially to alter signal timing so that it optimizes flow among all modes of traffic, including bicycle and pedestrian traffic.

It's the first time the city has conducted such a study in more than 20 years. The average turnover for such studies is between five and 10 years.

Everyone agrees that, despite the streetcar's struggle to handle demand, the weekend was an overall success -- even if it came with a reminder of work still to be done.

"It's a good and a bad thing," Hardy said. "It's good because it's tons of people everywhere and a lot of things going on downtown. But it also exemplified the need for some transit lanes and stuff like that."

Prior reporting by WCPO's Joe Rosemeyer and 9 On Your Side's Jake Ryle contributed to this story.

Evan Millward is a reporter for 9 On Your Side. Connect with him on Twitter (@EvanMillward) and on Facebook.