Kyle Plush's family storms out of council meeting after hours of discussion, inquiry into his death 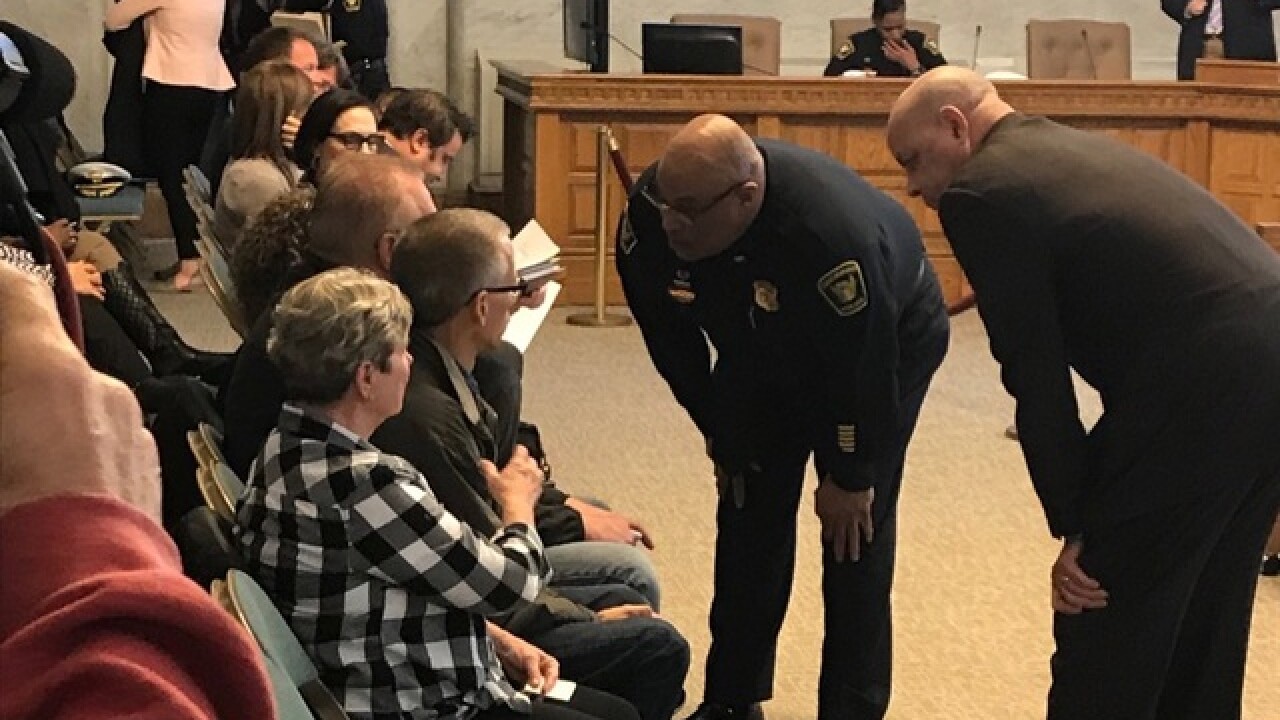 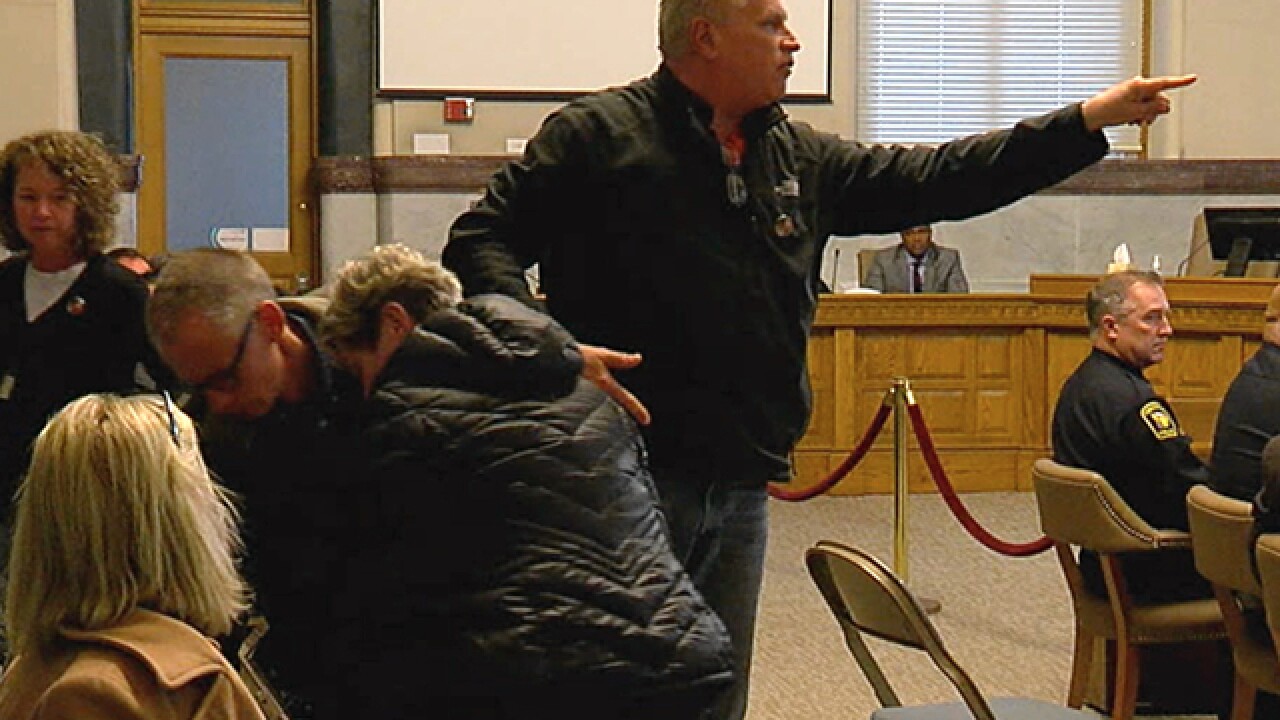 CINCINNATI -- The family of a teen who suffocated to death in his own car despite making two 911 calls for help sat quietly through five hours of a Cincinnati City Council special meeting that included testimony about the city's emergency communications system from police, union leaders and a dispatcher-operator.

Then, in his closing comments, Councilman Wendell Young implied they might seek financial compensation for 16-year-old Kyle Plush's death, "but there's no amount of money that's going to make you happy."

"It's not about the money," Plush's father, Ron, called from the crowd.

"I believe that. There's no amount of blame that is going to make this--"

He left, the rest of the family following closely behind, and council members attempted to soldier through the rest of their closing remarks. Vice Mayor Christopher Smitherman said the departure "hurt me deeply" and should provide motivation for all of those attempting to sift through the quagmire of technological failure and human error that led to 16-year-old Kyle Plush's death.

The Seven Hills School student died trapped inside his van in the school parking lot April 10, even after he pleaded twice with 911 operators to send help. Two Cincinnati police officers and a Hamilton County sheriff's deputy who searched near the school never found him.

Cincinnati Police Chief Eliot Isaac told council members Tuesday he didn't yet know if his officers ever got out of their vehicle to look for Plush. He's ordered an internal investigation of the entire incident, which should be complete in about 10 days.

"The officers are in the process of being interviewed this week," Isaac said. All of their actions will be reviewed, and we'll be able to determine the propriety of their actions."

City Manager Harry Black is asking for an outside organization to conduct a "sentinel event" review. That's when "bad things happen in a complex system" and are usually because of multiple, compound mistakes, according to the National Institute of Justice. Such events can point to underlying weaknesses in that system.

Much of Tuesday's meeting focused on staff shortages at the 911 center, but it's not clear if that played any factor in the events leading to Plush's death.

Smitherman, chairman of the Law and Public Safety Committee, said Monday he thinks all city employees involved should be placed on leave.

"I don't want to assume anything," he said. "I don't know what has happened to officers who responded, what communications? Where are they in that investigation? I have questions, simple questions, regarding the van itself -- were the doors open? Was there GPS? Why was it difficult to identify the location of the van?"

Councilman P.G. Sittenfeld asked specifically about why officers didn't have better information about Plush's location, wondering if the city's technology was as up to date as it could be.

"There's no reason why Uber should have more specificity than our emergency response system," Sittenfeld said.

However, speakers including Black and former Assistant Police Chief David Bailey said faulty technology was not necessarily the issue; indeed, the issue might lie in over-reliance on technology investment as a panacea to problems that originated in the way personnel were trained and treated.

"We've got all these systems," Bailey said. "What do you do with them?"

Beth Radigan, an operator-dispatcher with 18 years of experience, argued the call center's systems were flawed and had become less responsive since a January update, but some of the greatest challenges she faced were in interactions with supervisors and being expected to perform tasks for which she had not been properly trained.

"We want to do the best job we can, but we have not been given the tools, the training or the support," she said. "We need a better training program, and we need administration that is more supportive of the people there."

Black added he believed the high rate of turnover at 911 call centers in the city contributed to a lack of continuity, reducing the overall knowledge base among employees, and that city efforts to fight turnover were not where they ought to be.

"We've been working to repair this bike while we're riding this bike," he said.

Here's more about those issues and some of the questions that haven't been answered yet:

What do body cameras, police cruiser dashboard cameras and video surveillance show from that day?

WCPO has requested dashcam video, body camera video and surveillance from the parking lot, but that request has not been fulfilled.

Does the under-staffing at the 911 center have anything to do with this tragedy?

Cincinnati City Council spent a lot of time talking about staffing deficits at the 911 center, an issue WCPO has documented over the years.

The mayor asked why under-staffing at the call center hadn’t received more attention from city officials. City documents show the center has consistently been fallen short -- between 11 to 20 jobs -- the workers needed to fully staff the center.

“I have personally stuck my neck out for two years asking for help, support, for people," said the city’s emergency call center system analyst Jennifer King.

But it’s still unclear how -- and if -- having more staff on hand that day would have prevented Plush’s death.

What went wrong that day?

Isaac said something "went wrong" with the call, but we still don't know what that means.

We do know that Plush did everything right that day. He called 911 twice, told them his location and described the car he ultimately he died in.

But no one helped him.

“If you are in an emergency, you don’t get to make two calls,” he said.

Has anyone been disciplined from this incident?

No. Smith, who took a second call from Plush and said she could not hear him, was placed on administrative leave after Plush’s death. Her leave was not a result of any disciplinary action.

Any discipline, if there is any, would come at the end of the internal investigation.

Did police have access to the latitude/longitude coordinates of Plush’s phone to try and track exactly where it was?

We don't yet know that. Those coordinates are in the computer-aided dispatch report, but it's not clear yet if those are relayed to officers' onboard computers.

Who is under investigation?

The Cincinnati Police Department is conducting an internal investigation of the police officers, 911 operators and dispatchers who responded to Plush’s calls for help.

Why couldn't Smith hear Plush on the phone that day?

That’s still unclear. Smith said the computer screen she uses to enter information about emergency calls froze that day, but it’s unclear if that had any impact on Smith’s ability to hear Plush on the phone.

The technology firm that supplies the computer system says Cincinnati’s CAD was functional that day.

“The CAD did not crash and was operational throughout the event,” Scott MacDonald, the Vice President of public safety strategy for TriTech Software Systems, wrote in an email to Vice Mayor Christopher Smitherman. “One of the workstations running CAD in the back-up center was re-started prior to the 2nd 911 call.”

What did Amber Smith, the dispatcher who took the second call from Plush, tell police investigators happened that day?

We don’t know. Smith’s interview will be released as part of an internal investigation into the incident.

READ MORE: What we know, and don't know, about Plush case

Listen at 29:20 as reporter Hillary Lake explains what happened to Kyle Plush, and what went wrong that led to his tragic death: