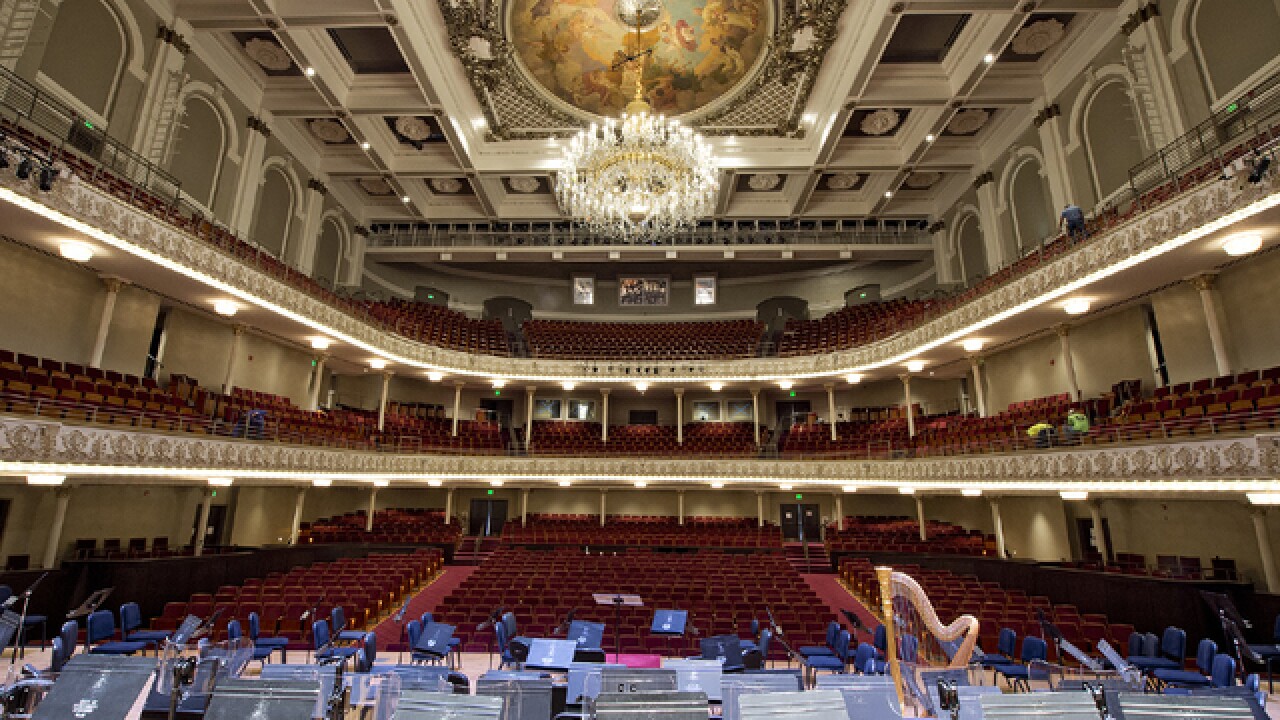 Copyright 2017 Scripps Media, Inc. All rights reserved. This material may not be published, broadcast, rewritten, or redistributed.
David Sorcher
The newly renovated Cincinnati Music Hall is about to re-open to the public. Photo: David Sorcher 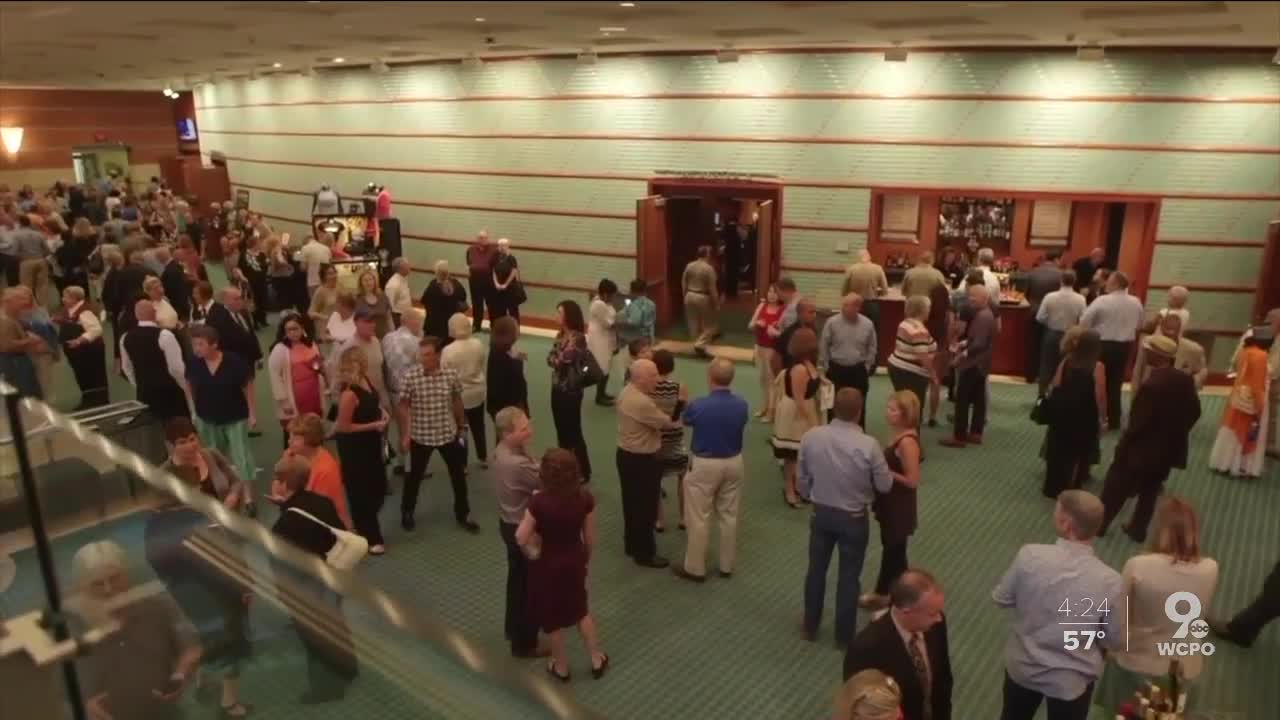 HAMILTON, Ohio — Cincinnati-area arts organizations are losing millions of dollars each month during stay-at-home orders and the COVID-19 pandemic. Although some aspects of Ohio life have begun to tiptoe back toward normality, arts groups expect a long wait before they can return to business as usual.

Kintner's organization is surveying local arts groups about their financial status and expects new results soon, she said. ArtsWave estimates the pandemic has already caused a $14-18 million loss in Greater Cincinnati and could double the damage over the summer.

Studios and theaters may be dark, but local arts groups are tapping creativity to figure out how to survive until bans on mass gatherings are lifted.

Some may not survive long enough to go back to normal.

Giving up is not an option for Fitton Center for Creative Arts executive director Ian MacKenzie-Thurley.

"Our whole business model is predicated on bringing people together for enjoyment, for engagement," he told WCPO. "That's a challenge right now."

The Hamilton arts center has only canceled one performance, MacKenzie-Thurley said, and only because the tour ended. It has rescheduled about a half-dozen others, many of which were sold out. That doesn't include several weddings, receptions and other events that are being canceled, rescheduled, or moved.

With the building sitting mostly empty each day, the organization is losing "tens of thousands of dollars" each month, according to MacKenzie-Thurley. That doesn't include its payroll obligations, which have been covered by the federal Paycheck Protection Program.

"We're getting submissions digitally, so we can put them in an online gallery," said MacKenzie-Thurley. "But we see this as an opportunity (for audiences) to see more about the artist. You can get more depth than maybe you would in the gallery."

There's another idea the Fitton Center is researching to help restart performances. It's literally outside-the-box — in the center's parking lot.

"We're out there measuring, we're figuring if we can put that on stage," he said. The center is looking at two options: A drive-in performance set-up in which people stay in their cars or a more conventional socially distanced audience set-up.

"We're just trying to figure out all and look at all possibilities to make sure everybody feels safe, is safe and can still have a good time."

The Cincinnati Arts Association estimates it will lose $2 million by the end of its fiscal year on August 31, according to information given to WCPO.

It manages downtown's Aronoff Center, which has rescheduled 59 ticketed performances and canceled 57 during the pandemic. Twenty-one non-ticketed special events were also canceled.

At Over-the-Rhine's Music Hall, 25 events have been rescheduled and 58 have been canceled.

Those theaters and the Weston Art Gallery remain closed with no reopening plan yet from the state of Ohio. Even if, as rumored, theaters will be allowed to reopen with limited capacity for social distancing, ArtsWave's Kintner said the finances won't make sense.

"Even when that happens, if we can only seat people every few seats, that will translate into a 20-25% number of seats available to sell," she said. "At that point, it would not be economically viable to run a theater or live performance, and the experience would be significantly diminished too."

The numbers may be unsettling, but CAA has also found ways to engage audiences outside of the traditional theater spaces. It's bringing family-friendly arts experience to homes (and inboxes) daily, including offering local icon Zoom backgrounds and planning 360-degree tours of its venues.

Its Artists at Home series is connecting resident artists with people in quarantine, as well.

More than just a mass gathering

There's been special concern about the future of live performance by groups. The virus is spread by aerosol transmission, so group singing may be silenced for a long time.

There are about 1200 active members of the Young Professionals Choral Collective, which named Danielle Cozart Steele its new artistic director over the weekend.

"Our entire way of being is to come together and spew hot air at other people," laughed Steele, who takes over YPCC on July 1. "Right now, we're saying, 'We are brave enough to think outside the box, and we are resilient enough to engage in some projects that maybe don't involve 150 people singing in the same room together.'"

A couple hundred YPCC members stood in the rotunda of Union Terminal, rehearsing for the group's annual gala, days before Ohio Governor Mike DeWine started issuing orders effectively closing the state. The gala is YPCC's largest fundraiser and was to be its biggest gala yet, with hundreds of tickets sold.

Instead, the organization had to settle for an online auction. Then it canceled the last half of its eighth season. Luckily, some ticket holders donated the money they'd spent right back to the chorus.

"There's no way that that comes close to the sustaining funds that we need to support the infrastructure of the organization," said YPCC founder KellyAnn Nelson, who moved to Washington, D.C., months ago.

"Choirs are not just mass gatherings pumping out music at you," Nelson told WCPO. "They're more than that. They're a soulful home for so many humans."

She said YPCC members continue to gather virtually even though their season has been canceled.

When will people return?

"We're going to have to be really ingenious and responsive as a community and decide what are the assets that we value," Kintner said. "The arts are going to look different."

Broadway theaters announced this week they would remain closed through Labor Day, possibly even longer.

Everyone WCPO spoke to for this story expressed concern over what Kintner called "the facilities issue" — the capacity concerns and crowd perceptions to come.

To that end, ArtsWave is funding Cincinnati's participation in a worldwide survey to determine how people feel about returning to theaters and live performances.

"It seems clear that the public will first be comfortable going back to museums and public parks and zoos where there's more outdoor space," Kintner said.

The Fitton Center's MacKenzie-Thurley agreed, saying opinions have been as varied as the number of patrons he has talked to.

In the meantime, ArtsWave has extended its capital campaign for 2020 through the summer, though Kintner told WCPO she does not think it will meet its roughly $12.5 million goal.