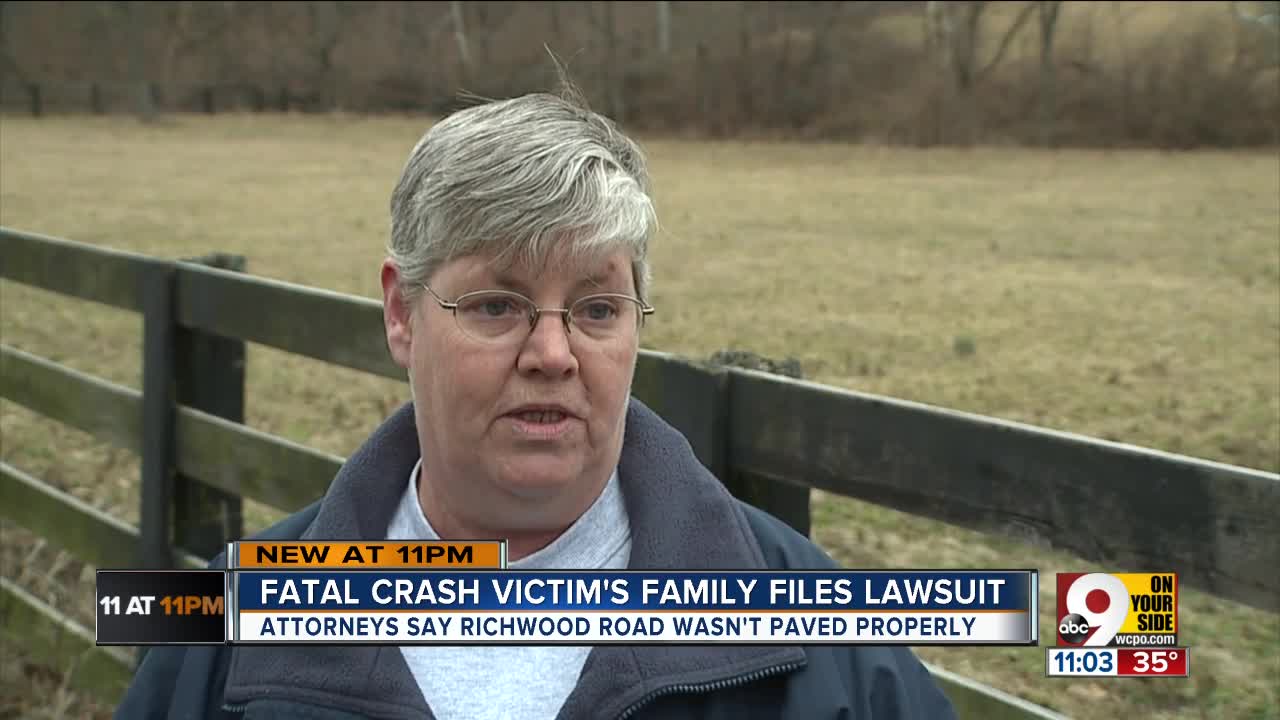 The father of three children left motherless by a head-on crash has filed suit against the driver who struck their car and the contractor that laid the asphalt on Richwood Road.

Editor's note: WCPO has not named the defendants in this case because they have not been charged with a crime.

WALTON, Ky. — The father of three children left motherless by a head-on crash has filed suit against the driver who struck their car and the contractor that laid the asphalt on Richwood Road.

According to Alton Godwin’s complaint, which he filed on behalf of the children, both parties “were wanton, grossly negligent and exhibited a reckless disregard for the life, safety and health” of his family in the January 9 wreck.

“It’s a tragedy all the way around for all parties involved,” attorney Jay Vaughn, whose firm will represent Godwin in court, said Friday night.

Police believe Amy Skiba, 45, died after a flatbed truck driver veered off the side of Richwood Road and overcorrected, crossing the center line and striking her Honda Accord head-on. Her 12-year-old twins were both injured.

The suit claims their older brother, who had been driving in the area, recognized Skiba’s car at the scene of the crash and stopped to check on her.

He found her dead in the driver’s seat.

The suit seeks a jury trial and damages for emotional distress and negligence, according to court documents.

Diana Sipple, who lives along Richwood Road, said Friday that speeding and construction have been consistent problems since she moved in. Although she’s never been injured, she’s had to replace her roadside mailbox five times after crashes repeatedly knocked it off its post.

“You take your life in your hands coming to get your mail because people will not slow down,” she said.

According to Vaughn, officials investigating the scene of the crash that killed Skiba found tire treads off the shoulder of Richwood that indicated other cars had slipped off the side of the road, too. He hopes that will strengthen his argument that poor road-work and management were contributors to the crash.

“The road is too narrow, the drop off the side of the road is too steep, and they paved over the rumble strips,” Vaughn’s partner, Ronald Johnson, wrote in an email.

Godwin and Skiba were divorced at the time of her death. Representatives said her husband, Mark Skiba, had filed a complaint of his own and would work with Godwin to hold the defendants accountable.

“As a parent, it’s a nightmare,” Vaughn said of the case. “You don’t want to have to deal with adult issues with children, but these children had these tragic issues thrust into their life. It’s going to be something they live with their entire life.”