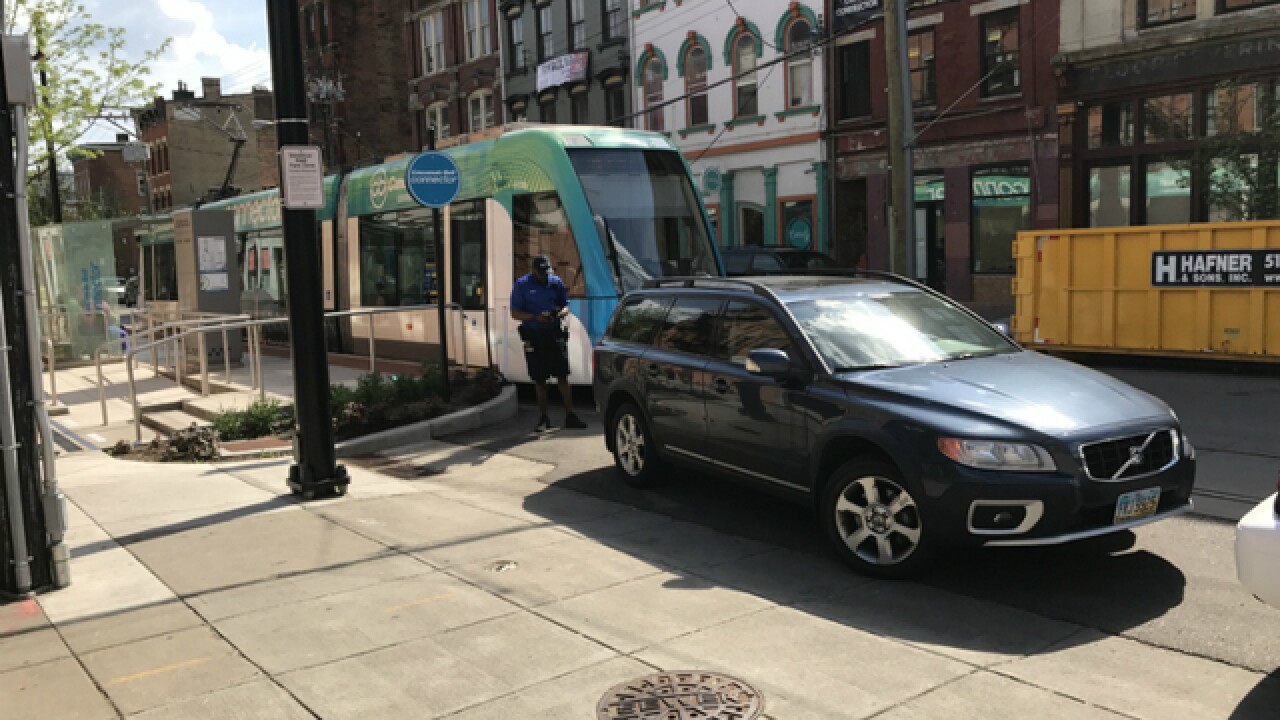 Copyright 2018 Scripps Media, Inc. All rights reserved. This material may not be published, broadcast, rewritten, or redistributed.
<p>A vehicle blocks the streetcar tracks in Over-the-Rhine. (Provided)</p>

CINCINNATI -- If anyone knows what it's like to rely on the streetcar every day, it's Matt Jacob. That's because the Over-the-Rhine resident makes a point to ride as often as he can.

"I try to ride five days a week," he told WCPO.

Having ridden the streetcar hundreds of times between his OTR home and his Downtown office, he's come to know its benefits -- and its shortcomings.

Reliability has remained a consistent complaint about the streetcar since its September 2016 launch. First, credit card machines wouldn't work, and arrival displays weren't accurate. The city is in the midst of a Downtown traffic signal study to improve congestion during rush hour, which would often put the streetcar behind schedule.

While those issues are mostly resolved, another problem continues to stand in the streetcar's way, literally: vehicles blocking the streetcar tracks.

Jacob said he's been on the streetcar during a blockage roughly five times since he started riding.

"A lot of that was right when it opened up," he said. "At the start of it, a lot of it was cars trying to parallel park who were just oblivious that there was even anything waiting for them behind them."

The city of Cincinnati invested tens of millions of dollars in its streetcar system. This story is part of a series examining what is holding the system back.

After 18 months of operation, accounts are mixed about how the city is working to make sure the tracks are clear. WCPO dug into raw track blockage data compiled by the Southwest Ohio Regional Transit Authority. While the city owns the streetcar, the region-wide transit agency oversees operations on the city's behalf.

Our review found that incidents resulting in the streetcar stalling for a vehicle in its way are trending up this year despite enforcement and prevention efforts from both the city and the transit agency.

Since streetcar vehicles began testing in the spring of 2016, there were 1,346 instances of a vehicle blocking the streetcar tracks as of March 31, 2018.

It's a story of peaks and valleys when broken down month by month.

While Assistant City Manager John Juech reported in March that "blockages have decreased nearly each month since the start of revenue service," SORTA's data show that, on a month-by-month basis, increases in blockages were more common than decreases.

Here's a month-by-month breakdown of streetcar blockages by vehicle type:

Juech, who oversees the city's streetcar system, declined WCPO's multiple requests for an interview about the growing number of blockages. Chief Performance Officer Leigh Tami told WCPO, via a city spokesperson, that she's found the data to be sometimes inconsistent.

"It's a major constraint physically there because you have the traffic signal, the bus stop where the track is located," said Paul Grether, SORTA's director of rail services.

"Depending on which vehicle is where, the blockages occur to both organizations," he said.

Grether told WCPO that SORTA is already working on relocating those bus stops and relocating the Area G stop over the next six to 12 months.

SORTA is not alone in making sure the tracks are clear. The city's municipal code prohibits cars from parking along the streetcar route, which means Parking Enforcement is also charged with intervening in the event of a blockage.

A spokesperson for Juech told WCPO the city has issued 936 citations as of last week.

Even compared to the fine for not paying to ride the streetcar, the fine for causing a blockage is low: It's $100 the first time a rider is caught without paying his or her fare. That fare increases with each subsequent offense.

Some members of city council -- most notably Chris Seelbach -- have pushed for an increase in the penalty, but that has yet to pass through council.

Other parking infractions here in Cincinnati -- like blocking a fire hydrant or parking in a handicap zone -- can cost offenders up to $250.

The number of blockages and the low penalty for blocking the tracks makes Cincinnati's streetcar system an "outlier," according to John Schneider.

Schneider is a retired real estate developer and Downtown resident. Popularly known as "Mr. Streetcar," he was a key player in bringing the streetcar back to Cincinnati and advocated by hosting trips to other streetcar cities.

"This is not normal in terms of how these systems are operated."

Schneider says the root of the streetcars' problems stem from City Hall.

"I see no effort by the city to improve it," he told WCPO.

Schneider places blame specifically on Mayor John Cranley, who opposed the project and temporarily blocked its progress when elected to office in 2013. A super majority of city council overrode the action two weeks later.

"Mayor Cranley could tomorrow call a news conference and say, ‘We’re no longer going to tolerate these blockages. The data are in, and it’s a problem. We are going to start issuing citations for every violation,'" Schneider said. "We haven’t heard that message from our mayor yet."

Cranley's office did not respond to requests for comment.