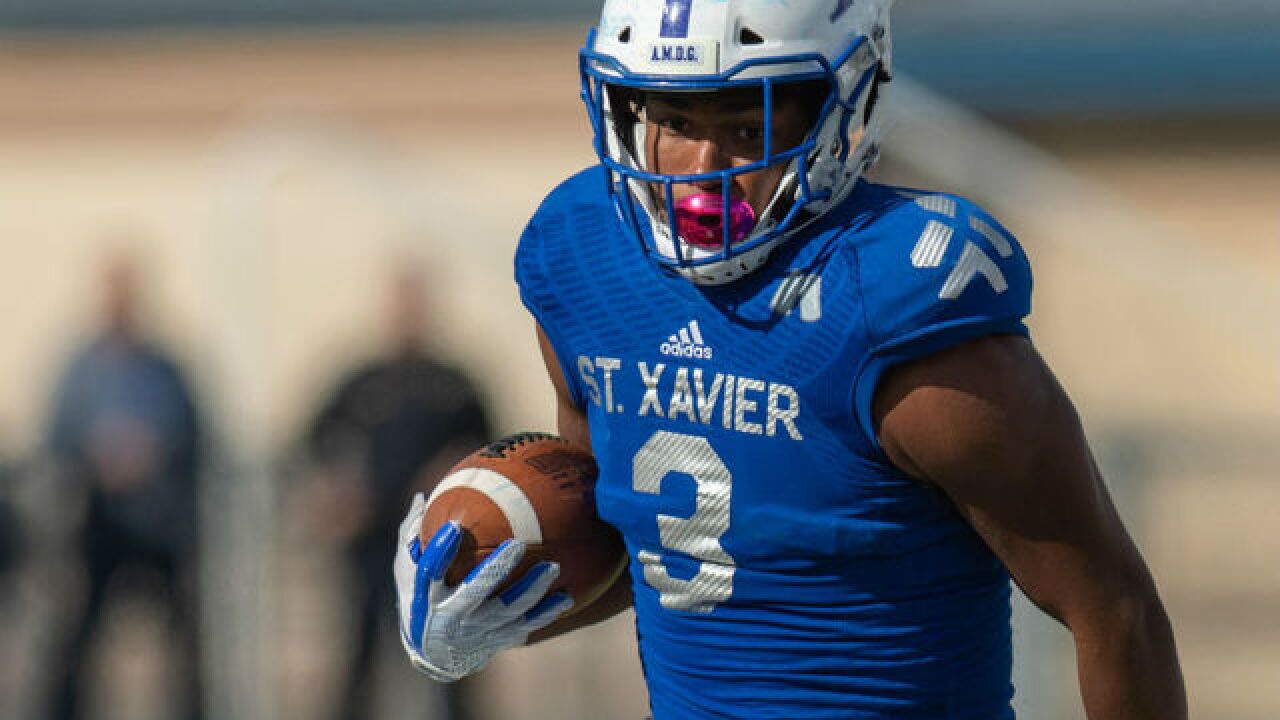 Copyright 2018 Scripps Media, Inc. All rights reserved. This material may not be published, broadcast, rewritten, or redistributed.
<p>St. Xavier senior running back Chris Payne has rushed for 590 yards and eight touchdowns this season. He was named to the Greater Catholic South Division's first team this week. (Photo by Milt Wentzel)</p>

As a youngster, he used to live near and play pickup basketball with Colerain senior running back Syncere Jones. Colerain senior quarterback Deante Smith-Moore is like family to Payne.

Like the friendship of Colerain coach Tom Bolden and St. X coach Steve Specht, there is a great deal of mutual respect between the highly-successful high school football programs. They are meeting for the 14th time in the postseason and the first time in the first round since 2012.

But Friday night's Division I, Region 4 quarterfinal at Cardinal Stadium (7 p.m. kickoff) will enhance the renewal of this storied Greater Cincinnati rivalry a step further. MaxPreps named it one of the top 10 games nationally to watch this week.

A Week 2 matchup carries plenty of hype and a good test of personnel for each team, but the playoffs are something else. By November, late August can seem like a lifetime ago for a high school football team.

The stakes are even higher when Colerain (10-0) is the No. 1 seed and the state's No. 1-ranked team in Division I with aspirations of reaching Canton. But don't discount the Bombers just yet.

The Bombers may be an underdog Friday night, but Specht believes that has been the case all season.

"The road to the state championship in Region 4 goes through Colerain," Specht said. "They are the No. 1 seed. As we told the kids, whether you play them Week 1 or Week 2 of the playoffs or the regional finals -- they are the best team in the region."

St. X has won three of its past four games, and Payne has rushed for 100-plus yards twice and 97 yards twice. He has scored six touchdowns overall in that stretch.

On Oct. 26, he rushed 21 times for 97 yards and two touchdowns in a 34-7 win over visiting Louisville St. Xavier. That performance earned him Skyline Chili Crosstown Showdown MVP honors.

Payne, 18, is also more than a football player. He's a leader in the school. He chose St. X for its academics and hopes wants to enter the medical field one day, possibly as a physician's assistant. His athletic experiences with injuries have engendered in him a desire to help others however he can.

St. Xavier football statistician Kurt Brinkman always sees a smile on Payne's face. Brinkman coached Payne for one year in basketball and is impressed with his character.

"He is the type of person who makes you feel great as a coach," Brinkman said. "His work ethic is second to none."

Payne also has adopted the "Men for Others" school motto along the way. He warmly acknowledges his classmates in the hallway and wants to be known for being more than a varsity football player. Being a part of the football program has taught him lessons for life.

"It's been an honor," Payne said. "I've learned a lot from my experiences and people before me that helped shape me into the person I am today."

Payne admits he can be his own harshest critic on the field by placing a significant amount of pressure on himself. He has had conversations with Specht about that each season.

However, he has learned to find balance, and it has paid off.

"He's come such a long way from being a very me-centered individual as all kids are when they come into a high school to understanding what leadership is," Specht said. "He has been a tremendous leader for us this year. He's done a great job."

St. X running backs coach Tyler Williams, a 2011 Colerain graduate, said Payne never makes excuses. Payne may not be the most vocal player but he always encourages his teammates each week while asking how he can improve.

"That's what you have to love about a young running back -- a player who is willing to learn and master his craft," Williams said. "He is a great all-around kid on and off the field."