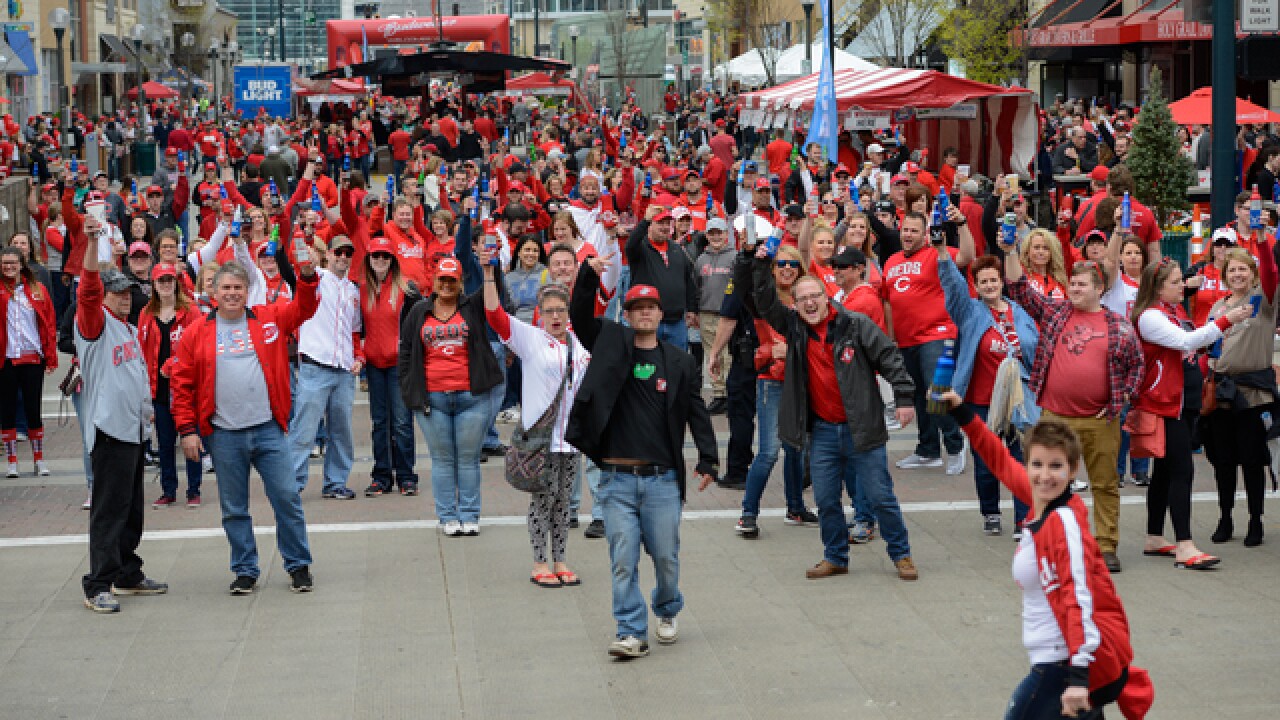 Copyright 2018 Scripps Media, Inc. All rights reserved. This material may not be published, broadcast, rewritten, or redistributed.
Joe Simon
Cincinnati Reds fans hit local bars early to celebrate Opening Day on April 3, 2017. The crowd hoists up their drinks for the camera and toasts the 2017 Cincinnati Reds.

Baseball season will officially begin at 4:10 p.m.  when the Cincinnati Reds deliver the first pitch against the Washington Nationals on Opening Day at Great American Ball Park. As Cincinnatians know, though, there is more to Reds Opening Day than just the game.

The return of baseball is a citywide celebration -- and more so this year for multiple reasons. Here's what will be different, new and familiar this season.

Yes, there will be two days to celebrate

The biggest deal this year is that Reds Opening Day and the Findlay Market Parade will take place on different days.

The 99th annual Findlay Market Parade won't take place until April 2, three days after Opening Day. And the reason for the split is simple.

Members of the Findlay Market Merchants Association postponed the parade because the week before Easter, which falls on April 1 this year, is one of the busiest times for Findlay shop owners.

Instead, the parade will begin at noon April 2 on Race Street near the market and follow its traditional route to downtown.

This isn't the first time the Findlay Market Parade and Reds Opening Day will be held on different days. The Reds' 1994 season opened with an Easter Sunday night game, which forced the market to hold its parade the following morning.

There is an upside to Opening Day and the Findlay Market Parade being held on different days this year: nearly double the number of celebrations. Among the highlights:

The baseball celebration picks back up on Monday for the Findlay Market Parade. Here are some bigger celebrations to know:

Spending a day at the ballpark is going to get a lot tastier this year.

While ballpark staff always cooks up something new, this year's offerings come with a heaping side of love for classic Queen City fare. New treats include Frisch's hot fudge cake in a cup, a goetta fry box and a burger topped with some of the Queen City's favorite foods.

The Cincinnati Reds are introducing new features this season at the ballpark, including several early night games.

The Reds will play the Cubs on April 3 for the first of 15 earlier night home games this season. Each game will begin at 6:40 p.m. instead of the usual 7:10 p.m. start time.

The earlier start time will allow fans and families to get home a little earlier, according to Michael Anderson, manager of Reds public relations.

... and a few more concerts

A popular feature introduced during last year will return to the ballpark this season with a twang.

Super Saturdays, Fireworks Fridays and Family Sundays will all return to the ballpark this year.

During each Saturday home game, the Reds will give away team memorabilia. Saturday swag options include Kids Opening Day ball caps on March 31; a Reds garden gnome on May 19; a Rosie Red bobblehead on June 30; and a Joey Votto Funko Pop! collectable on July 28.

This season will see 11 Friday post-game fireworks shows presented by Rozzi's Fireworks May through September, plus a special Independence Day show on July 4.

Each Sunday home game will include live mascot races, face painters and kids prize giveaways for families. This year's Family Sundays "Run the Bases Days" will be held on April 15, July 1 and Sept. 9.

The Reds Hall of Fame & Museum also added a new exhibit this season. "Reds Threads" features more than 120 items including jerseys, jackets, pants and caps. The exhibit traces the history of Reds uniforms back to the 1869 Red Stockings' knicker-style uniform.

For a full schedule of promotions and giveaways visit reds.com/promotions.

Themed ticket packages, first introduced last year, will return, too, and this year's themed packages each come with a limited-edition bobblehead.

The first themed ticket package event on April 25 will include a Bob Ross bobblehead giveaway when the Reds play the Atlanta Braves at 6:40 p.m. Other package themes include: Star Wars on May 4; a Flying Pig theme on May 7; "Peanuts" on May 20; Margaritaville on June 29; Elvis on July 27 and the Grateful Dead on Aug. 17.

The most popular themed ticket package, though, may be the Fiona bobblehead giveaway; that will be available when the Reds play the Detroit Tigers at 7:10 p.m. June 19.

For more information about each themed package visit reds.com/themes.