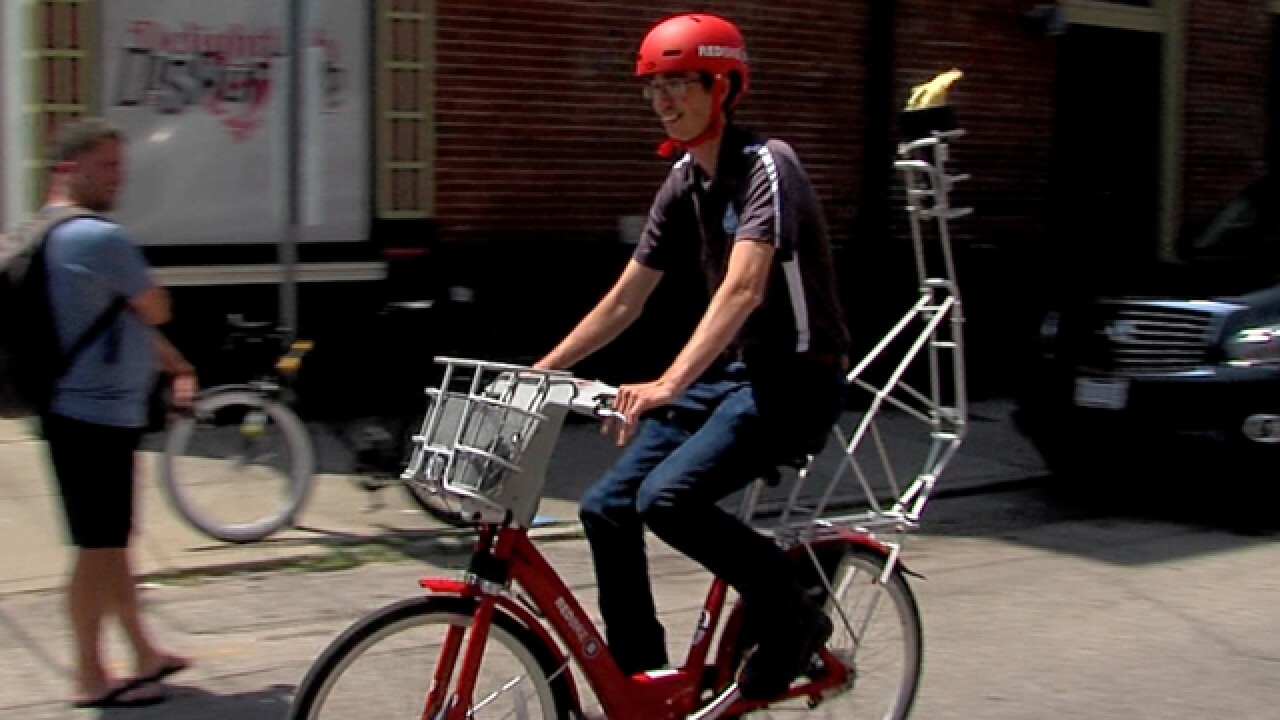 Copyright 2018 Scripps Media, Inc. All rights reserved. This material may not be published, broadcast, rewritten, or redistributed.
<p>Cincinnati Neighborhood Games founder Henry Frondorf test rides the Red Bike that will bear the games' torch through all 52 Cincinnati neighborhoods between Friday, July 20 and July 21, 2018. (Ryan Heeter/WCPO)</p>

CINCINNATI -- The Cincinnati Neighborhood Games will resemble the Olympic Games even more its second time around this weekend, with a bike relay that will carry a torch roughly 85 miles through all 52 of the city's neighborhoods.

What better kind of bicycle to convey that torch than the city's public bike share program, Red Bike?

The games' founder, Henry Frondorf said the partnership was a "natural fit."

"The real Olympics have a real torch relay, so it's not that far of a stretch for the Cincinnati neighborhood 'olympics' have their own torch relay," Frondorf said. "But we didn't want to spend all week walking or running around town.

Full disclosure, Frondorf said, it's not a real torch but an electronic mock-up. Red Bike mechanics fashioned a rig made out of the metal racks and basket parts that you'll find on any Red Bike.

Cincinnatians often regard their city as a city of neighborhoods, and, for Frondorf, the relay symbolically -- and literally -- ties all those neighborhoods together.

"They symbolic unification of it is that we're taking the same bike and the same torch through every single neighborhood over two days," he said. "So when it finishes at Washington Park, it's saying, 'We've been there; we're with you, and we're unified.'"

The Red Bike torch relay will begin Friday afternoon at Bizy Bee Bakery in Sayler Park. It will then advance across 51 other checkpoints before arriving at Washington Park Saturday evening.

See when and where the torch will pass through your neighborhood here .

"We have 54 volunteers to ride the 52 segments," Frondorf said.

While Red Bike is still concentrated mainly in the city's Downtown and Uptown neighborhoods, Barron said that, after more than three years, Red Bike is asking, "What happens next?"

"How do we expand? How do we grow? How do we connect that system? What are the other neighborhoods to connect to?" he said.

For Barron, the Cincinnati Neighborhood Games and Red Bike share a similar mission: connecting the city's dozens of neighborhoods.

"What we've been able to do over the last three-and-a-half years is to get over 50,000 people to ride Red Bike and change the way that they're thinking about transportation," he said. "A lot of that happens Downtown, but it can happen in neighborhoods, too."

The first Cincinnati Neighborhood Games took place in July 2016 , after Frondorf came up with the idea about two years prior. He said his team spent about the last nine weeks holding "qualifiers" in each neighborhood, but anyone can come and sign up to fill any vacancies in their neighborhood team.

The games will include backyard games like H.O.R.S.E., cornhole, whiffle ball, and giant Jenga, among others, Frondorf said.

"We figure, if you live, teach, worship or go to school in a neighborhood, you can play for that team," he said.

The bike torch relay begins at Bizy Bee Baker in Sayler Park at 1 p.m. Friday, and ends at Brink Brewing in College Hill at 7 p.m. It will pick up again at Brink Brewing at 7 a.m. Saturday, and finish at Washington Park at 7 p.m.