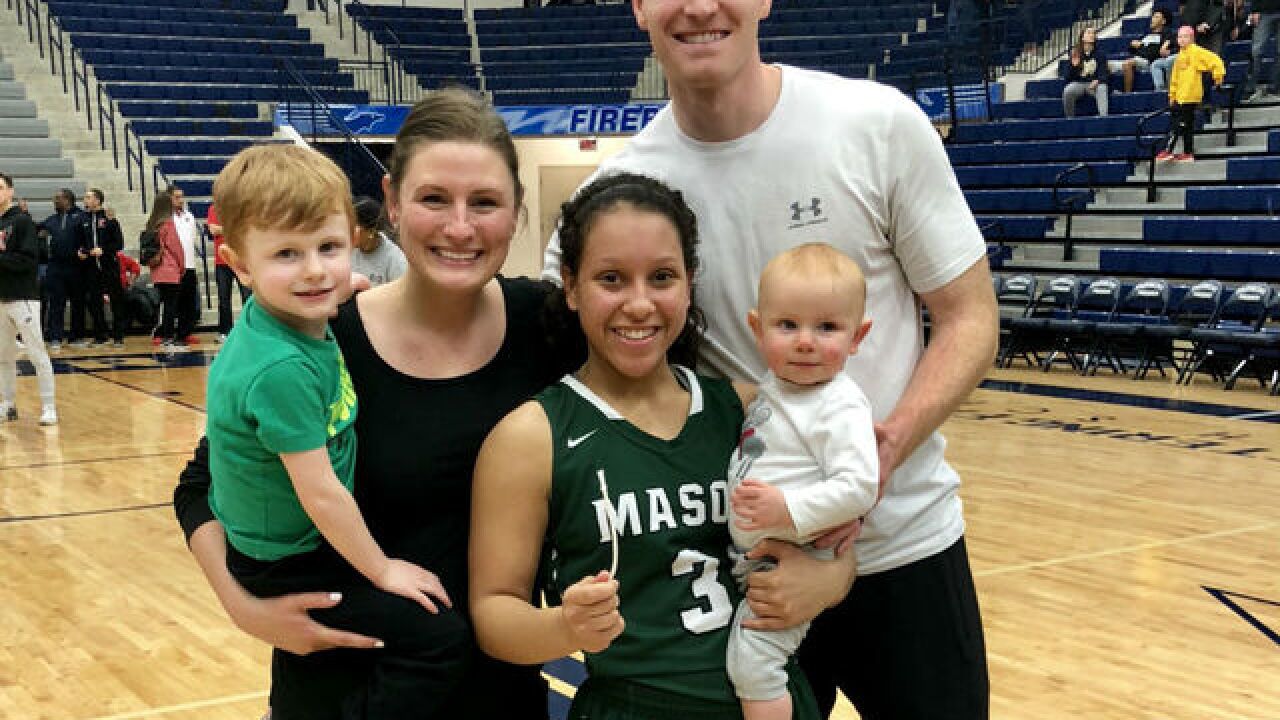 MASON, Ohio – Sade Tucker doesn’t remember how many times she moved as a youngster. There are too many locations to count.

The Mason junior point guard knows she lived in Alabama and Mississippi before moving to Ohio when was 8 or 9. What's most important is Tucker's perseverance throughout her childhood.

When Tucker’s mother, Andrea Niemann, died in November 2015, Sade lived in Colerain Township and was a freshman at Walnut Hills High School. Tucker’s father has not been in her life.

But, Tucker believes God had a plan for her path. That would include finding a loving home in Mason.

In late 2015, Kyle and Rachael Smith were aware of Tucker’s personal situation and opened the door for her to become part of their young family in Warren County.

Rachael (Arington) played basketball at Cincinnati Hills Christian Academy and later was a student assistant with the University of Kentucky women’s basketball team.

More recently, Rachael coaches Tucker during the Amateur Athletic Union season as the Director of Operations for the Cincinnati Angels Basketball Club.

Many people have helped Tucker on her journey. As a coach and adoptive mother, Rachael found a natural connection with her daughter.

Basketball was a common thread. But, faith was the foundation of their relationship.

The two attended Bible studies. Tucker had questions about her faith and Rachael did her best to give her answers that led her closer to God. Tucker confided in and trusted Rachael during a difficult time in the teenager’s life.

“It kind of alluded itself to being God’s perfect timing,” Smith said.

By early 2016, Tucker lived with the family at their home not far from Mason High School. In August 2016, Kyle and Rachael earned custody.

Kyle and Rachael also have two sons – 4-year-old Roman and 10-month-old Kade. They've been with Tucker every step of the way, including this tournament run for the Comets.

Tucker, named after the singer Sade, adjusted to having younger siblings;  she's given Roman some basketball tips.

The family attends Crossroads Church in Mason. She loves everything about her family. Basketball is interwoven in that.

“She’s been through a lot and she’s overcome so much," Rachael said. "She works her tail end off every single day.”

As the Mason girls’ basketball team (24-3) prepares to play Pickerington Central (26-2) in a Division I state semifinal Friday at the Schottenstein Center in Columbus (8 p.m. tip-off), Tucker, her family, friends and coaches are grateful for the opportunity.

Tucker, listed generously at 5 feet 4, is ready for this weekend. She simply doesn’t want the season to end.

That was evident March 10 when she scored a career-high 20 points to go along with three steals in the Comets’ 54-51 win over Lakota West in the regional final at Trent Arena in Kettering.

Rachael couldn’t help but get emotional during the postgame celebration on the court. She also knows the amount of hours her daughter has put into the game.

“There was definitely tears in my eyes when that final buzzer sounded,” Rachael said. “I was so proud of her. It was more than basketball. It was a moment I will never forget – that’s for sure.”

Matula likes to say this Mason team is as focused and resilient on the court as any team he’s coached – boys or girls – in 30 years. And no one may better illustrate that this season as a student-athlete than the 16-year-old Tucker.

“She just exudes goodness,” Matula said. “You can’t help but smile being around her.”

Tucker, who would like to study mechanical engineering and marketing in college, played basketball her freshman and sophomore seasons at Walnut Hills before making her own decision to transfer to Mason this season.

Last summer, Matula was struck by how Tucker embraced a leadership role in the Comets’ youth camp. At the time, Tucker really only knew sophomore guard Megan Wagner. But, she quickly learned to make new friends with her other teammates.

“She came in and I swear to you it was like she had been there forever,” Matula said. “She jumped into the drills and helped. She was not shy. She was full of energy. That is just who she is. She is a breath of fresh air.”

Maybe it was no surprise that when Tucker left the regional semifinal game in the Comets’ 53-32 win over Mount Notre Dame March 7, the Black Hole – Mason’s student section – serenaded her name in unison.

Matula saw Tucker in the school hallway the next morning. Both shared the fact they couldn’t eat or sleep since the win.

Matula admitted he woke up with a big smile on his face recalling how the Black Hole lauded Tucker. She had a similar reaction that morning.

“She put her hands up in the air and looked to the sky and said, ‘I know Mason loves me,’” Matula said.