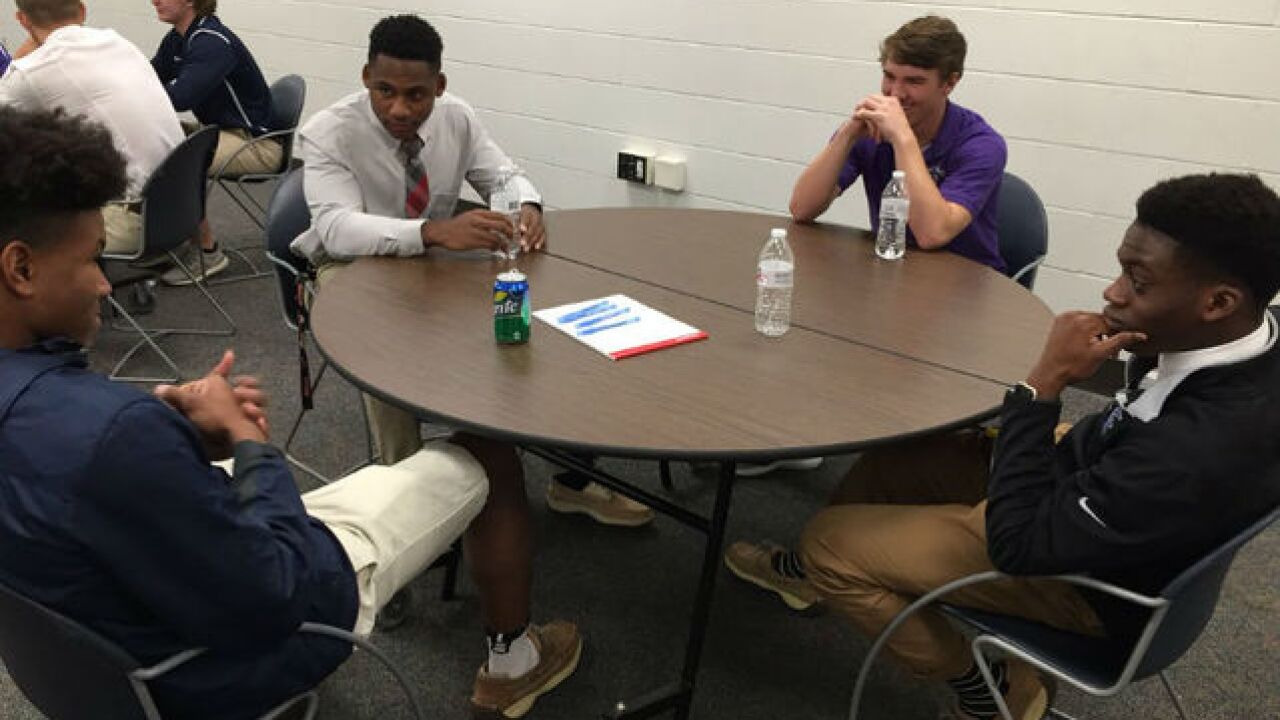 The start of the meeting saw the four member schools sitting in different rows by school and not in close configuration. Yet, any awkwardness soon evaporated.

An hour later, they were discussing ways to improve sportsmanship by conversing in a small-group setting at tables and learning the backgrounds of those seated. They also shared lunch and expressed ideas about how to improve student and fan behavior within the highly-recognized league.

“Today was about collaboration and building student leadership in the GCL South,” La Salle Principal Aaron Marshall said. “We proactively came together to talk about building our team/school up, keeping the passion, but doing it in the right way.”

McBride, one of 24 students who attended (six per school), has a unique perspective. He is verbally committed to play basketball at West Virginia University.

He was the quarterback on the Moeller football team until a season-ending injury occurred Sept. 22, 2017. He returned in time for the state basketball Final Four in March and decided not to play football his senior season . McBride is the head of the Moeller student section during football games this fall.

“I think the most important thing that was said was that we all have the same values and teachings at the end of the day,” McBride said. “As a school and community we have to respect others while still having passion and competing with each other.”

Principals and athletic administrators along with GCL South Commissioner Tom Gamble and WLW radio personality and ESPN college football analyst Rocky Boiman enjoyed the opportunity to speak with the students and let them voice their opinions.

“It breaks down some walls that I think maybe were created over time unintentionally,” Elder Athletic Director Kevin Espelage said. “Maybe lost amidst all the competition that we have between the schools is that we are still one brand and under the Catholic Church. So maybe that’s getting us back to that. It’s certainly created a lot of lines of communication and that’s been helpful to me as an inexperienced AD. But just overall – getting a better understanding of what everyone is doing.”

Gamble told the students they had an opportunity Tuesday to set a new course for student sections in determining what is creative but also what crosses the line. The GCL South wants to avoid a repeat of last winter’s controversy but also have a clear understanding of what it can improve.

The summit discussed experiences from student sections chanting against other players and teams along with coaches' actions and remarks toward officials/referees along with feedback from other non-league schools. Every school had its own perspective but it shared a common GCL bond.

"I thought it was awesome meeting with all the GCL schools," La Salle junior running back Cam Porter said. "I learned about other schools and some of the things that they are into. I think it was great meeting about the problems we had in the past about the student sections. Learning different ways to cheer on our players without offending anyone in the process. I really think it helped and I would definitely do it again."

Espleage said another leadership summit could occur next spring. There is discussion about having a different topic each school year.

“You’ve got to empower our students,” Espleage said. “It starts there. We can make all kind of policies and write rules and put them on paper and say we have this. But we need these young men to own those rules and policies and be a part of the rulemaking and policies and get it out to their classmates and their peers. The goal in the spring would be to do something similar to this but bring some more younger guys so these seniors can sort of pass the torch.”

Gamble, who is also the Skyline Chili Crosstown Showdown organizer, said schools must be cognizant of what student sections say that may be repeated on social media. The challenge for the students Tuesday, Gamble said, was to understand every word spoken in a student section represents the individual, the school and the conference collectively.

“It’s a very important and delicate task,” said Boiman, a 1998 St. Xavier graduate. “We don’t want to lose the spirit of the GCL rivalry. As our faith says, ‘Much is given, much is expected.”

Boiman challenged the students to become leaders in their own student sections. He relayed examples of how he can be critical of a play in a game he’s covering but not the specific player. He advised the students to build their own team up instead of diminishing others. He equated the GCL South to a brotherhood that should exude fierce competition but also respect for each other.

Tuesday’s meeting allowed for open discussion among the students and the administrators and that is critical to setting guidelines among the schools.

“It’s important,” St. Xavier Principal Terry Tyrrell said. “The ADs and the principals have been getting together for a while. People don’t realize that. I think people see the rivalry out there and the competition for students in admissions but then also on the playing fields. We have so much in common.”