Colerain senior QB Deante Smith-Moore is inspired by his family 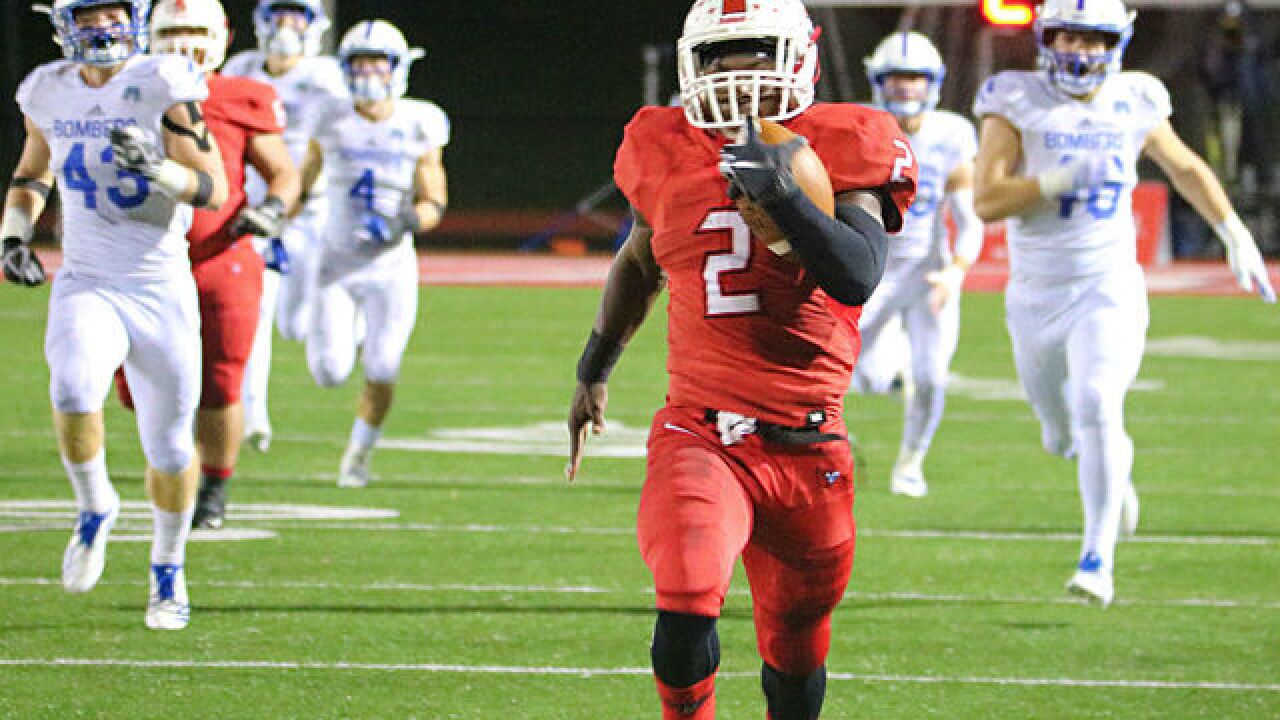 Copyright 2018 Scripps Media, Inc. All rights reserved. This material may not be published, broadcast, rewritten, or redistributed.
<p>Colerain senior quarterback Deante Smith-Moore has rushed for 1,202 yards and 17 touchdowns and has thrown for 998 yards and 18 touchdowns for the Cardinals this season. (Photo by WeAreColerain.com)</p>

COLERAIN TOWNSHIP, Ohio – For as long as he can remember, Deante Smith-Moore has wanted to help others.

The Colerain senior quarterback is in the National Honor Society, along with other school and community activities. He has been described as the "heart and soul" of the Colerain football team, in part because of his leadership as a captain.

Smith-Moore, 17, also wants to be a doctor one day. His desire is to give back to those in need.

“He’s going to be great at whatever he does,” Colerain coach Tom Bolden said. “He comes from a great family and has lots of support at home. He’ll be exceptional at whatever he wants to do.”

Moreover, Smith-Moore draws plenty of inspiration from his family. His elder brother, DeTuan Smith-Moore, is a former Colerain fullback who was named the Greater Miami Conference offensive player of the year in 2013. He's now studying education at Central State University.

Christina Smith, Deante’s mother, is a nurse. DeJa Smith-Moore, Deante's sister, has spina bifida. DeJa, 15, is a sophomore at Colerain.

“She’s his No. 1 fan besides Mom and Grandma (Arlene Roberts),” Christina Smith said. “She has not missed a game this year. She’s been a real trooper. I think she’s been a difference-maker.”

Smith-Moore’s family will be in Canton on Friday night (8 p.m. kickoff) when Colerain (14-0) plays Lakewood St. Edward (10-3) in the Division I state final at Tom Benson Hall of Fame Stadium. It is Colerain’s first state final appearance since the Cardinals won it all in 2004 in Canton.

Smith-Moore is thankful for the opportunity. His family says the sky is the limit for him in football and in life.

“I just want him to know that I am so very proud of him,” Christina Smith said.

So is the entire school community.

"He looks small, but he's a lot stronger than what most people might think," DeTuan Smith-Moore said.

However, the most significant stat is that Colerain is 20-0 with Smith-Moore as a starting quarterback dating back to 2016, according to quarterbacks coach Daniel Rod.

“Honestly, he is a coach’s dream because not only is he athletic and a great football player but he is really smart and he is really intelligent,” Rod said. “He is not afraid to open his mouth and talk to you about things and be open about what he sees with the defense and give play suggestions.”

Rod was the starting quarterback for Anderson’s 2007 Division II state championship team and the 2008 state runner-up squad. He knows what it’s like to prepare for a state final.

“I told him, ‘Don’t change a thing from everything we’ve done the past 14 weeks,’” Rod said. “Being able to go through it twice as a player, a lot of times people make the moment bigger than it needs to be. At the end of the day it’s just another football game that you just got to go out and execute and win.”

After last week’s state semifinal win over Pickerington Central, Smith-Moore couldn’t help but smile with his teammates in postgame interviews.

“This is all I’ve dreamed of since I was a kid coming to Colerain, and getting back to where we haven’t been in a really long time,” Smith-Moore said.

He grew up with the triple-option offense and played with the Little Cards youth program. He was able to spend time around the team when his brother played.

All of those experiences have prepared him for a week he won't soon forget.

“Coach has just been emphasizing, 'Go make history and go out how you want to be remembered,'” Smith-Moore said. “The team is very senior-led, so we all know this is our last one. Let’s go out on top.”