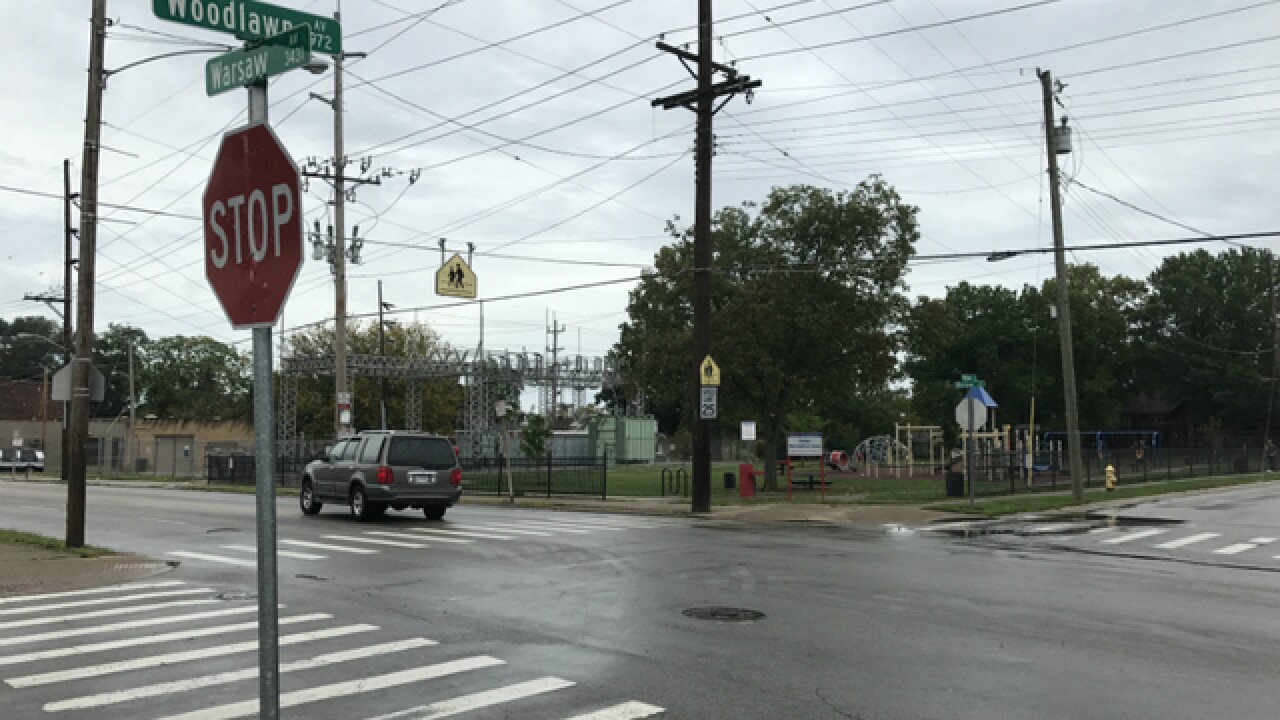 Copyright 2017 Scripps Media, Inc. All rights reserved. This material may not be published, broadcast, rewritten, or redistributed.
Pat LaFleur | WCPO
<p>The intersection of Warsaw and Woodlawn avenues in East Price Hill are among several slated for pedestrian safety improvements in the coming budget year. (Pat LaFleur/WCPO)</p>

CINCINNATI -- There's a lot going on around the intersection of Warsaw and Woodlawn avenues in East Price Hill.

Aside from multiple retail storefronts, the Ohio Bureau of Motor Vehicles and the Salvation Army are only a few hundred feet away. St. Lawrence Church -- the neighborhood's oldest Catholic parish -- and its elementary school are within blocks. The Price Hill branch of the Cincinnati and Hamilton County Public Library as well as the Price Hill Recreation Center are just a few blocks in the other direction.

It's also one of the city's most hazardous intersections for pedestrians, according to a study conducted by the city's Department of Transportation and Engineering.

That's why it's one of the first intersections that will get upgrades, thanks to a newly budgeted $500,000 of city funds aimed exclusively at improving pedestrian safety throughout the city.

For Tom Gamel -- who heads up the East Price Hill Improvement Association -- the neighborhood being walkable and pedestrian-friendly is critical to its vibrancy.

"Whenever you have a business district like Warsaw, if you want to have a good housing stock around it, you want to make it a place where it's easy for people to walk to those stores and shop," Gamel said. "In order to build up your business, you have to have safety.

"That's one of our goals: to make a safe, walkable neighborhood."

While the Warsaw corridor is one of the city's biggest business districts, Gamel said, the West Side neighborhood as a whole is chiefly residential, at about 85 percent residences.

"If you look at the volume of people who cross the street on Warsaw, it has to be one of the highest areas," he said.

Warsaw also sees some of the heaviest auto-traffic volume in the city, running through the heart of the West Side and serving as one of the major arteries connecting Downtown -- the city's biggest job center -- with the city's western neighborhoods, where the majority of the population resides.

It's not just about safety while crossing the street, though, Gamel said.

"It's not just crossing the streets, but also safety in terms of being able to walk the streets at night and not having to worry about any potential criminal activity," he said.

That's why his team has been talking with the city about improving lighting and installing additional cameras along Warsaw.

The irony about cameras, though, is that they can become ineffective due to another street-calming measure -- planting curbside trees.

"One of the difficulties with cameras is trees, and having trees trimmed so that the camera can pick up what's going on," Gamel said. Some of the trees along Warsaw haven't been tended to, he said.

"We all like trees in our neighborhood, and they serve a good purpose, but if they're not maintained it creates more of a problem."

While the city hasn't announced specific plans improving these intersections on Warsaw, measures taken in the recent past include painting a new crosswalk at Hamilton and Palm avenues in Northside, as well as a center-lane pedestrian yield sign on Sycamore Street just outside Ziegler Park in Over-the-Rhine.

DOTE Director Michael Moore said during Monday's Neighborhoods Committee meeting that the city intends to install two more such signs on Hamilton Avenue at Lingo Street and on Chase Avenue and Cherry Street.

"We want these crosswalks to be lit up," he said. "Maybe we could reduce to one lane going east, one going west and then parking on either side."

For now, though, pedestrians should use extra caution when crossing Warsaw, Gamel said, especially during rush hour.

"Around four or five o'clock, it's crazy."