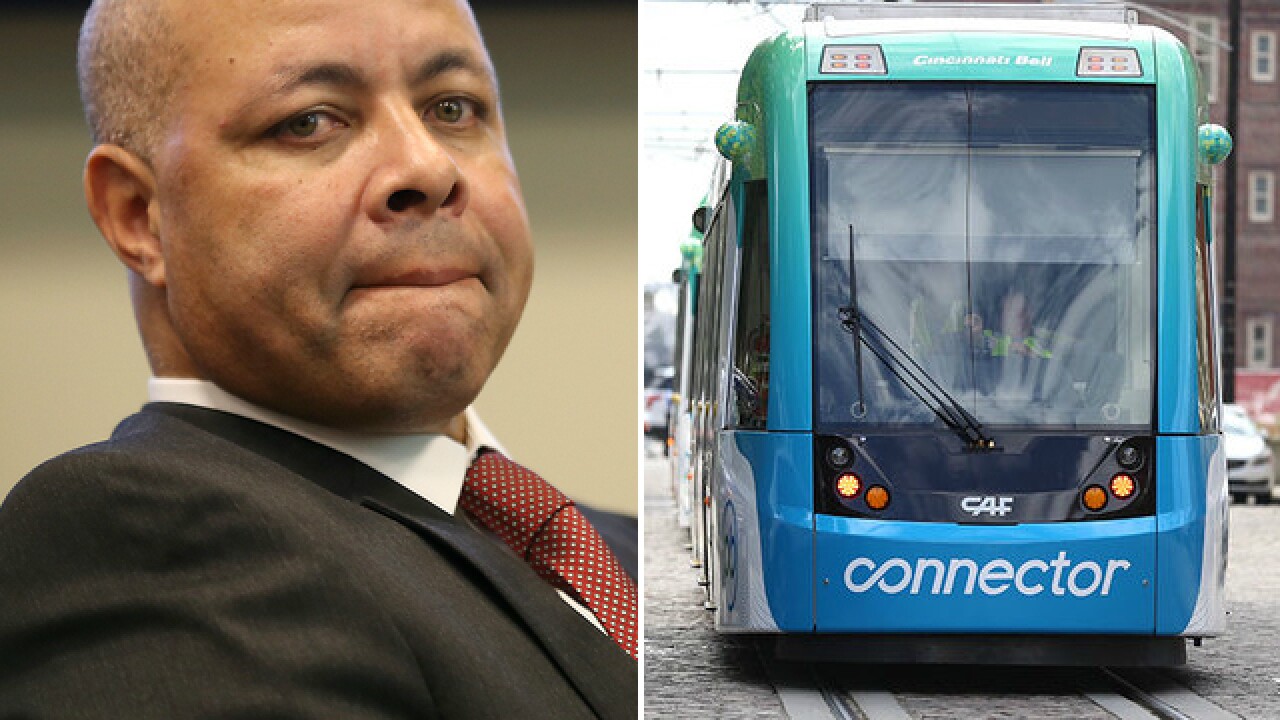 Copyright 2018 Scripps Media, Inc. All rights reserved. This material may not be published, broadcast, rewritten, or redistributed.
<p>In a series of text messages between City Council members -- obtained by WCPO on Oct. 22, 2018 -- former city manager, Harry Black (left) is said to have promised fixes to the city's beleaguered streetcar if it meant he would not be fired.</p>

CINCINNATI -- Ousted city manager Harry Black offered "fixes" to Cincinnati's streetcar -- among other promises -- to at least one City Council member if it meant he would not be fired, according to recently released text messages among five elected officials.

In a series of text messages among City Council's so-called "Gang of Five" -- Democrats P.G. Sittenfeld, Chris Seelbach, Wendell Young, Greg Landsman and Tamaya Dennard -- Seelbach told his colleagues that then-City Manager Harry Black offered to push forward with prioritizing traffic signals for the streetcar -- so it would run faster and have to stop less -- along with making it free to ride.

Both were proposed fixes for the beleaguered 2-year-old streetcar system.

"He agreed...to include in his budget signal prioritization and making the streetcar free," Seelbach wrote, referring to Black, in a March 12 text message. "And I have those promises in writing... in exchange for me not voting to fire him!"

In another text earlier that day, Seelbach criticized Black for his "lack of any kind of leadership on fixing the streetcar." Seelbach said Black also offered cooperation on responsible bidder legislation, in exchange for a "No" vote on a measure calling for his termination.

WCPO has requested from Seelbach's office documentation of such written promise from Black, but has not heard back as of this writing.

The text messages are now the subject of a lawsuit, alleging they violate Ohio's open meetings laws.

The nearly 80 pages of text messages include discussion among the five council members regarding Mayor John Cranley's request for Black's resignation, and subsequent discussions between the council members and Black. The text messages, ordered released by a judge during a court hearing Monday, date from Jan. 19 - March 24, 2018.

The streetcar has been a political hot potato since supporters first proposed the circulator train more than a decade ago. It was a wedge issue in the last two mayoral races -- both won by Cranley, who ran opposed to the streetcar project and paused the project for the first two weeks of his first term.

It's been plagued with mechanical, logistical and ridership issues since its launch in the fall of 2016.

For some streetcar supporters, the text message exchange is a window into how politics have plagued the streetcar from before its beginning.

If the streetcar's troubles were the plot of a murder mystery, the texts are what Derek Bauman would call the "smoking gun."

"(Black's) basically saying, 'We could do all this now,'" Bauman said, referring to streetcar fixes like different traffic signal timing or free fares -- fixes that had remained mired in red tape throughout Black's management of the project. "That tells me that Black knew what the answers were, and something was holding him back."

Bauman lives in Over-the-Rhine and was a Mason police officer before running for City Council last year. He also serves as a board member for the rail advocacy group All Aboard Ohio, an organization that has been vocal about its support of the streetcar project.

He's criticized City Hall leaders in the past for dragging their feet on what he says could be simple solutions to some of the streetcar's biggest problems -- primarily its consistent tardiness and, as a result, low ridership.

"The traffic study should have been done years ago," he said, referring to a still incomplete traffic study that city council ordered in October 2016. The study will evaluate traffic signal timing throughout Downtown to maximize its efficiency for all vehicles -- including people using the sidewalks.

"They're still dragging their feet," he said.

Another proposed fix that can't seem to gather traction in City Hall: increasing the fee for parking on and blocking the streetcar tracks. Streetcar proponents on council have proposed raising the fee from $50 to $100, but multiple attempts have resulted in no change to the current fee structure.

"This is a political football -- always has been," Bauman said. "Finally the layers of this onion are coming off."