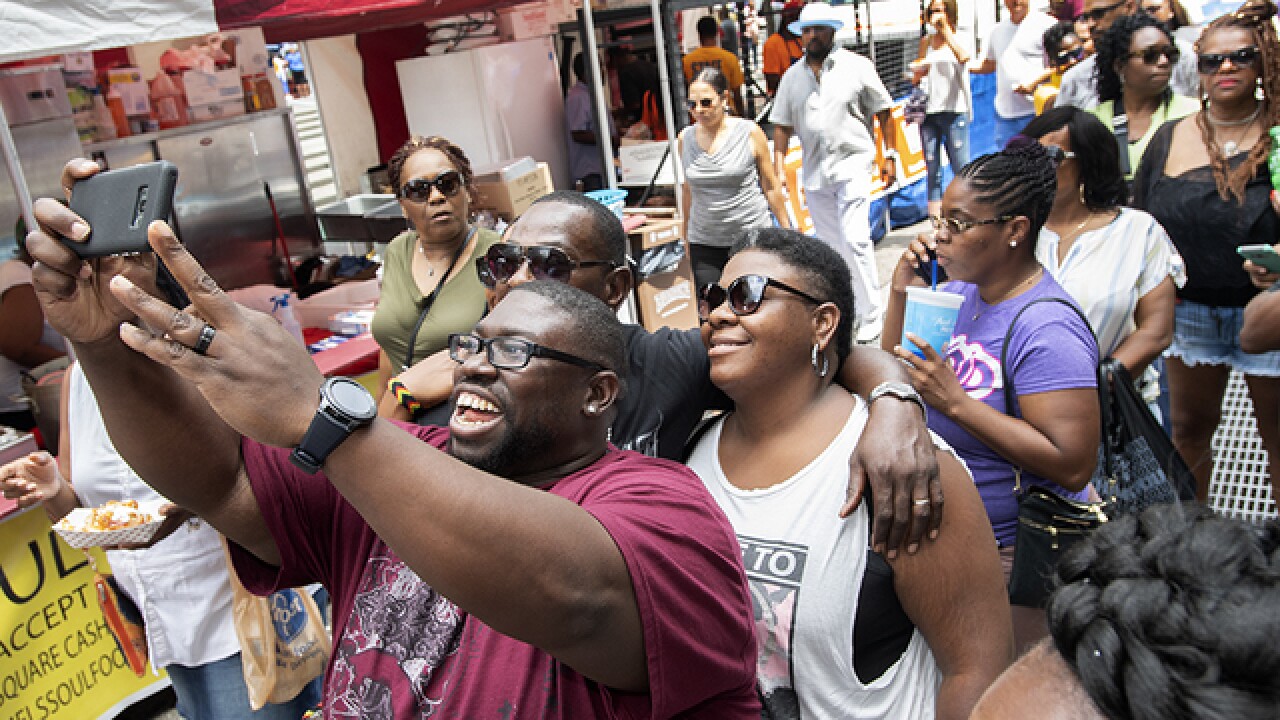 Copyright 2018 Scripps Media, Inc. All rights reserved. This material may not be published, broadcast, rewritten, or redistributed.
Cincy Soul returned to downtown Cincinnati for its third year July 27-29. People took a selfie as they waited in line at Mel Soul Food booth. Photo by Joseph Fuqua II for WCPO

CINCINNATI – Wil Hearn wasn't sure what to expect when he agreed to participate in last year's Cincy Soul food festival.

SEE A PHOTO GALLERY from Saturday at Cincy Soul.

"I was very nervous putting myself out there like that," said Hearn, who began operating local catering company No Pork on My Fork in 2013.

Cincy Soul organizer Julian Rodgers asked Hearn to set up a booth for the second year of the festival, which took place over two days in July along Downtown's Fifth Street, between Vine and Walnut streets.

Rodgers, co-owner of OTR Live and the Treehouse Patio Bar in Over-the-Rhine, organized the first Cincy Soul in 2016 as a one-day festival to raise the profile of local minority restaurant owners and food vendors.

Hearn said his business grew dramatically after he participated in last year's Cincy Soul. Before the event, No Pork on My Fork primarily sold individual dinners and catered small events.

"That opportunity and the event just catapulted me," Hearn said. "I've done so many events since Cincy Soul last year. The only time I really have to conversate anymore is early in the morning. I really don't have time to do dinners too often."

Hearn is returning for the third annual Cincy Soul, which begins after 6 p.m. Friday and continues until 10 p.m. Sunday on Fifth Street and Fountain Square.

Rodgers said he's already trying to figure out how to grow Cincy Soul next year. He and his fellow organizers even placed some small business owners wanting to participate in this weekend's festivities on a waiting list for next year.

This weekend's event overlaps with two days of the Cincinnati Music Festival, which draws thousands of out-of-town visitors each year to downtown Cincinnati. This year, Charlie Wilson and Jill Scott will headline the R&B music festival, which kicked off Thursday and continues through Saturday evening at Paul Brown Stadium.

The food festival has extended its hours as well. Festival hours are 6 p.m.-midnight Friday, 11 a.m.-midnight Saturday, and noon.-10 p.m. Sunday.

"We plan on being out there that late," Rodgers said. "I don't anticipate all the vendors trying to stay open, but those that do should do extremely well."

The festival will also feature a "Silent Party" starting at 8 p.m. to close Friday and Saturday. The party involves people renting neon-lit headphones from a booth that glow a certain color depending on which of three streaming music channels they listen to. Blue trimmed headphones will stream R&B and funk; red will stream reggae; green will play 1990s hip-hop trap music.

Hearn said because of the increased business Cincy Soul brought No Pork on My Fork, he is fully prepared for the extra day, longer hours and hopefully larger crowd this year.

"Last year was very last minute," Hearn said. "I really didn't have all the resources. I had to borrow some money from family and friends. Now based on the success I had last year, I am able to do everything on my own. It's huge for me. (Last year's Cincy Soul) was probably one of the most rewarding events for me."

"To see him on Sunday dancing in the streets ... I told him, 'I knew you were ready,'" Rodgers added. "The biggest thing with Cincy Soul is getting folks ready to serve that amount of people. And we want to make sure we can get everyone from all walks of life to come Downtown.

"We want everyone, whether they're going to the music festival or not, to come down and be a part of the festivities."