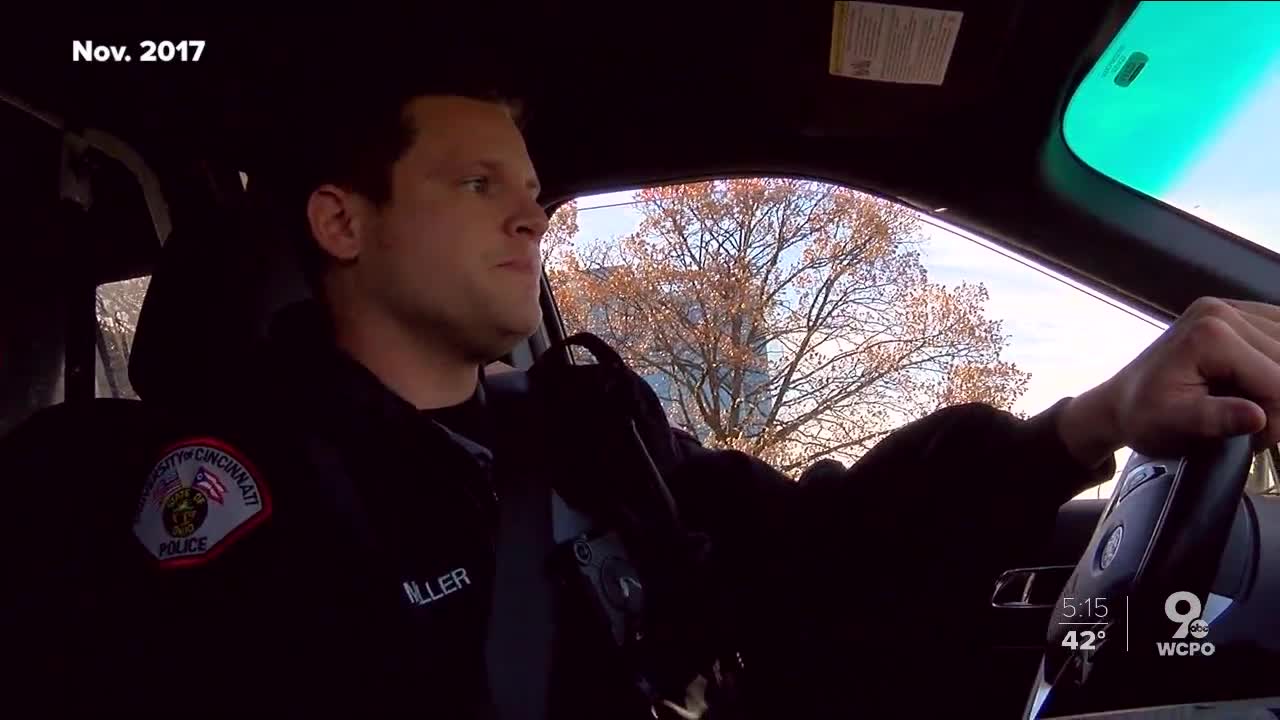 University of Cincinnati police officer Andrew Mueller was suspended in July 2019 and got a written reprimand one month before his arrest. 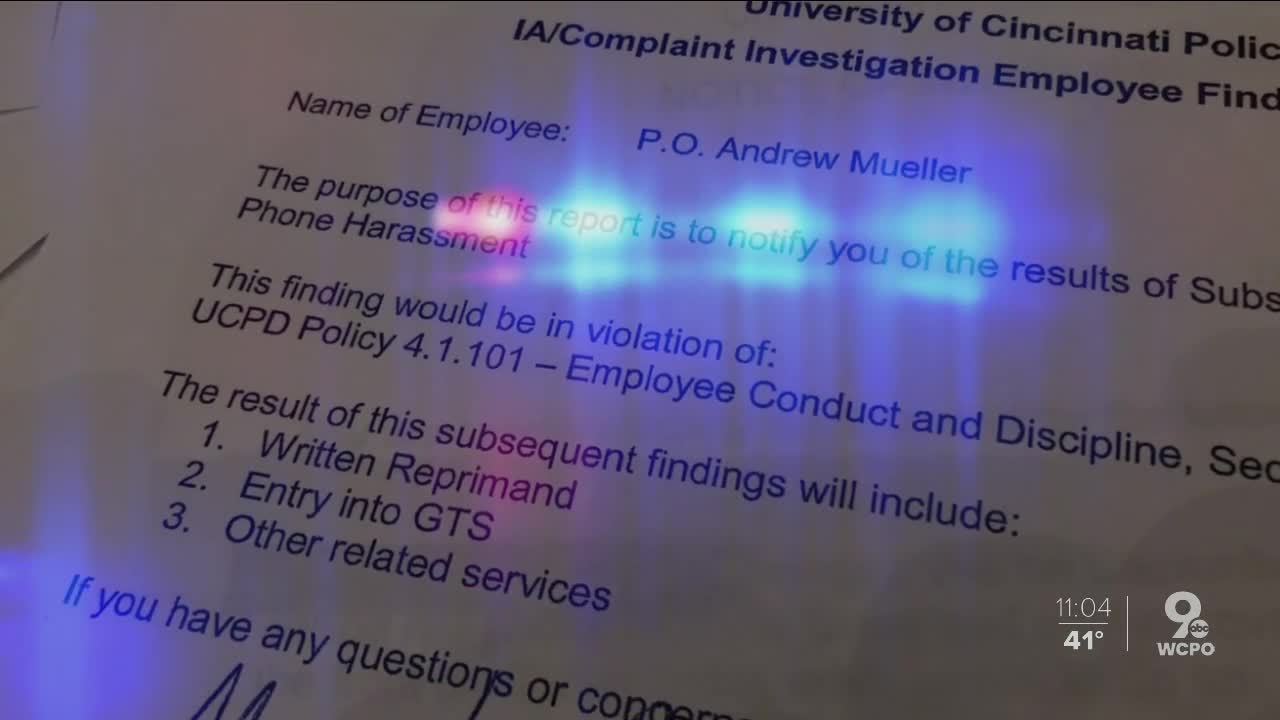 "Can I check your eyes?" Crisafi asked again.

"Can I give you a formation test?" Crisafi asked a third time.

"No, I do not consent," Mueller said.

Mueller can be seen in a dashboard-camera video obtained by WCPO grabbing Crisafi's hand, which is on his chest. Moments later, Mueller is handcuffed and taken into custody.

Mueller pleaded guilty to operating a vehicle under the influence on March 4. A judge sentenced him to 180 days in jail with 177 days suspended, a three-day treatment program and a one-year license suspension.

He told troopers he was on his way from his girlfriend's house to his home in Montgomery.

"I've had absolutely no alcohol tonight," he said.

Mueller was cited for operating a vehicle under the influence and failure to obey a traffic control device – in this case, officers at the crash scene. He appeared in court three days later.

The University of Cincinnati said Mueller's police powers were suspended on Feb. 18, pending the outcome of his case. Mueller's attorney, John Mulvey, didn't return a call for comment ahead of a March 4 hearing.

'A propensity for poor decision-making while consuming intoxicating beverages'

A little more than one month before his arrest, Mueller received counseling and a written reprimand from UCPD Chief Maris Herold.

It came after an internal investigation stemming from accusations of telephone harassment from a Liberty Township woman claiming to be Mueller's ex-girlfriend.

You can read the full report here:

According to the report, the woman told investigators she and Mueller had dated off and on for four years and had recently broken up. On Dec. 12, 2019, she said Mueller called her 30 times and texted her several times before showing up to her home, pounding on her door. She asked him to leave.

She called Butler County Sheriff's deputies, but they arrived after Mueller left. She said she never opened the door.

In an interview about the incident, Mueller told investigators he did call her repeatedly and went to her home. He said he took an Uber ride because he had been drinking and denied having his firearm on him at the time.

In a note to Herold, Captain Jeff Thompson recommended a fitness for duty evaluation, noting it was the second time in six months Mueller had been the subject of an internal investigation.

"Both of these incidents have shown that Officer Mueller has a propensity for poor decision making while consuming intoxicating beverages," Thompson wrote.

The first incident Thompson noted in his letter to Herold occurred in June, on the patio of a popular Montgomery bar.

On June 20, 2019, a woman reported to bartenders and Montgomery police that a law enforcement officer had shown her his gun and badge while they drank on the patio around 8 p.m.

The woman told investigators she was getting "weird vibes and auras" after talking to Mueller for a while.

She said she asked Mueller if he was an undercover officer. According to the internal investigation, she said he responded that he wasn't, saying, "Shhhh," and lifting up his shirt to reveal a gun in a holster and a badge tucked into his pants. Having a firearm while under the influence is, according to the Ohio Revised Code, a misdemeanor.

She told investigators she tried to get his name and badge number and what department he worked for, but he would only tell her he worked in Hamilton County. Then, according to the report, he "abruptly" left the bar.

You can read the internal investigation here:

Montgomery officers investigated the incident, but Mueller was never charged because, according to the Montgomery Police report, the witness was not willing to testify and there was no evidence to prove that Mueller had the gun.

During the UCPD internal investigation, Mueller admitted to drinking while having his gun, but he said he never removed it from his holster. He said in his interview that he had offered the witness advice and safety tips for a pepper ball gun she showed him.

'As a police officer, you're protecting life and liberty'

Aside from those two 2019 incidents, Mueller's personnel file describes a nearly exemplary employee during his time at UCPD.

Some examples include a commendation from a student rider in 2017, who said Mueller was "a credit to our department, always having a positive attitude, especially when interacting with the public."

That year, he was also commended for his engagement with young people at the Peace Bowl event on campus. In a letter from S. Gregory Baker, director of police community relations, Mueller was seen throwing a football and playing catch with kids, letting them try on helmets and taking "selfies" with the kids.

In March 2018, Mueller was recognized for his efforts in helping other officers respond to a young man in cardiac arrest. His file noted that CPR and use of an AED saved the man's life.

WCPO profiled Officer Mueller in 2017 when University of Cincinnati Police reintroduced Tasers, a recommendation that came in the wake of the 2015 officer-involved shooting death of Samuel DuBose.

"As a police officer, you're protecting life and liberty," Officer Mueller told us then. "The last thing you want to do is use deadly force."

Mueller said he had even volunteered to have the Taser used on him during the officers' training.