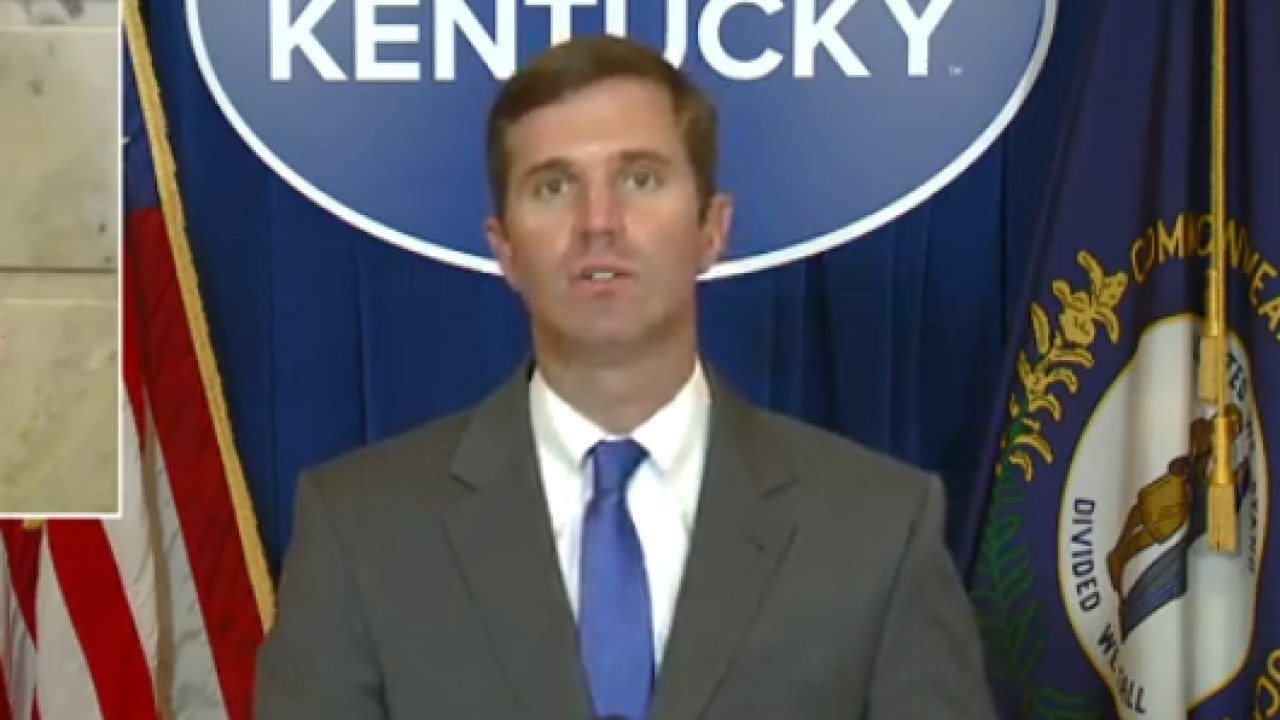 Copyright 2020 Scripps Media, Inc. All rights reserved. This material may not be published, broadcast, rewritten, or redistributed.
Gov. Andy Beshear at a coronavirus briefing on July 22, 2020.

Since the pandemic began, Kentucky has administered 560,161 coronavirus tests, and roughly 7,000 people have recovered from the virus.

Beshear also noted that Kentucky's coronavirus positivity rate, a seven-day average of positive cases out of total tests, now sits at 4.92%, a figure which has roughly doubled since mid-March.

"That is a concern, and that shows that it's not just an increase in testing -- it's that more people being tested are showing positive results," he said Wednesday.

Beshear said to keep the economy open and to increase the chances of children returning to school in fall, Kentuckians must wear masks in public. The governor said new mask mandates in Ohio and Indiana will help coronavirus prevention efforts here.

“This isn’t a political thing, this is a public health tool that is the difference between life and death,” Beshear said, holding a mask.

NKY Health reports that 2,218 people in Boone, Campbell, Kenton and Grant counties have tested positive for coronavirus since March, and 79 people have died of the virus as of Wendesday.

Beshear said that the last fiscal year will likely end without a budget shortfall, but without federal aid, next year's budget could see some of the worst cuts in Kentucky history.

For the 2019-2020 fiscal year, Beshear asked state agencies to reduce expenses by 1%. Because of this, Beshear said the state initially expects no budget cuts to K-12 education, post-secondary education or public safety agencies. Due to higher lottery sales, needs-based scholarships will receive $15 million above what was expected, he said.

The current fiscal year revenues have already declined by 8%, the worst fiscal quarter reported since the Great Recession. Without federal help through the CARES Act or other assistance, Kentucky would see a $1.1 billion shortfall in the next fiscal year.

Kentucky Lt. Gov. Jacqueline Coleman announced Tuesday that the state will offer unlimited COVID-19-related “emergency days” for faculty and staff who may need to quarantine during the school year if they come in contact with the virus.

At a Tuesday press briefing with Beshear, Coleman said school staff typically are only given a few emergency days per year.

“The issue we came up against was, what happens if teachers or bus drivers or cafeteria workers are exposed to someone and not necessarily contract the virus but has to be quarantined until they get a test back? That would allow them to use these emergency days in that way, so they’re not using sick days unless they are actually sick," she said.

Coleman also asked parents for their understanding as school districts and superintendents draft plans for students to potentially return to classrooms this fall.

“The heart of every reopening plan should be the health and safety of every child and every adult in the building as well as every family they go home to at night,” Coleman said Tuesday.

With a new "travel advisory" Monday, Beshear asked Kentuckians who travel to states with high rates of coronavirus to quarantine for two weeks. Those states, which have seen or are approaching a 15% COVID-19 positivity rate or greater, include Alabama, Arizona, Florida, Georgia, Idaho, Mississippi, Nevada, South Carolina and Texas. Puerto Rico, a U.S. territory, was also included in the advisory.

"I need you to cancel your plans if you're going to a beach ... it is just not safe," Beshear said Tuesday. "Time and time and time again, we've now seen people come back from these vacations and spread it in their work, in their church and in other places."

The governor also asked Kentuckians to once again limit social gatherings like backyard barbeques and block parties to 10 people or fewer after the state had previously relaxed restrictions on home gatherings. The rollback does not apply to events like weddings held at professional venues, nor does it apply to religious services.

Beshear said that wearing masks in public, now mandated by an executive order, will work to stop the spread of coronavirus and keep new cases low if 90 to 95% of people cover their face.

“That requirement will only work to stop this increase in cases if people do it,” Beshear said.

Kentucky’s Public Health Commissioner Dr. Steven Stack warned Tuesday that researchers have yet to see what long-term effects COVID-19 can have on people, even if they have recovered from the initial virus.

"When we take the steps we take to try to protect Kentuckians from this illness, it's because there's much we don't know. What we do know is terrifying for the people most vulnerable to it, but we don't really know the true extent of our vulnerability and who will ultimately be impacted and who may have chronic long-term consequences," Stack said.

He warned that the state could see a “vertical climb” in numbers similar to situations in Texas and Florida without new action, saying that case spikes there are due to loosening coronavirus restrictions too soon and relaxing requirements for masks, gatherings and social distancing.

“When we get to our informal gatherings, which are typically with our friends and family, those are the very places where we’re most likely to let our guard down,” Stack said.

Watch a replay of the briefing live in the player below: