James Bradley bought his freedom from slavery, came to Cincinnati and influenced history 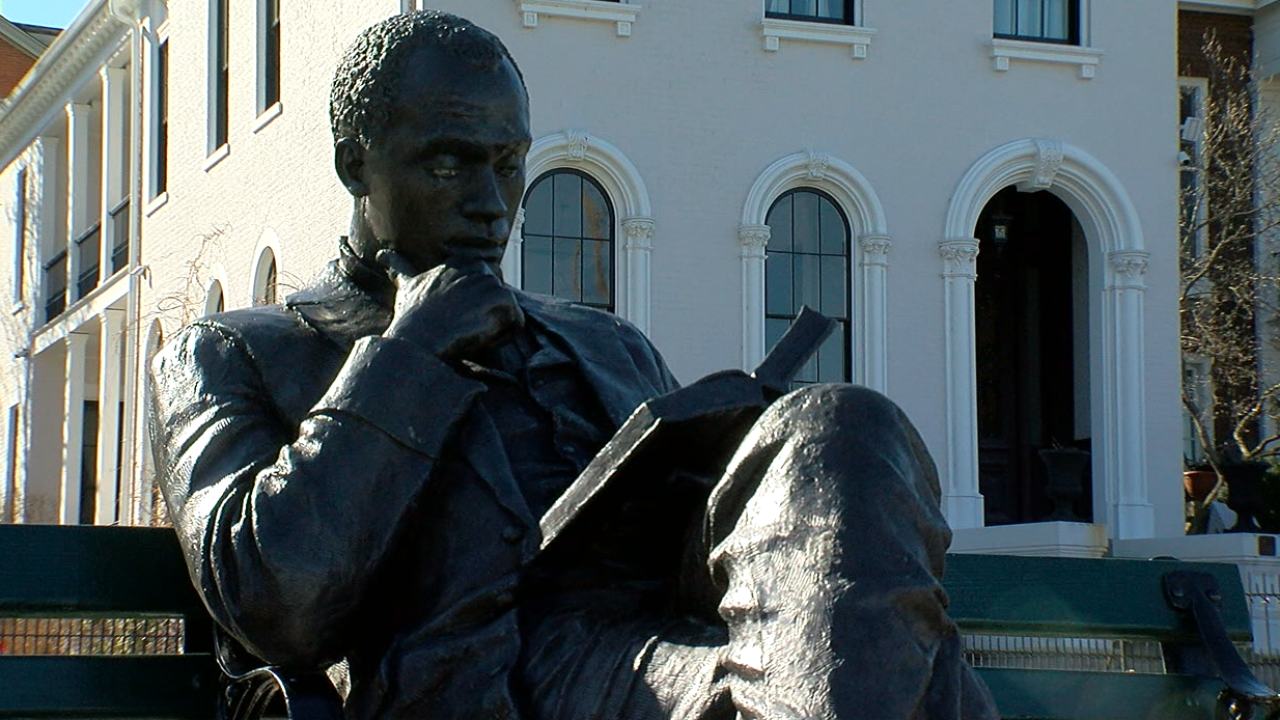 COVINGTON, Ky. — James Bradley is the most influential abolitionist that you've probably never heard of.

Bradley was a former slave who came to Cincinnati, and his time here had a ripple effect across Ohio and U.S. history. Today, there is a statue of Bradley in Covington near the Ohio River, showing him sitting on a bench and reading a book.

"He doesn't look like a lot of people in America think he ought to look, but everyone on the planet has this journey inside them to be personally free," said Carl Westmoreland, senior historian at the National Underground Railroad Freedom Center.

Bradley's story began with a tragic journey. He was abducted from his home in Africa at age 3, brought to America and sold as a slave in South Carolina. He was bought by a "Mr. Bradley" whose name he took and who "was considered a wonderfully kind master," he later wrote.

"The people who owned him did not mistreat him," Westmoreland said. "So, OK, we can't talk beatings or starvation or anything, but he was not free."

That's an important distinction. In an essay Bradley later penned as a free man in Cincinnati, he wrote:

"There is one thing about this, that people in the free States do not understand. When they ask slaves whether they wish for their liberty, they answer, 'No;' and very likely they will go so far as to say they would not leave their masters for the world. But, at the same time, they desire liberty more than anything else, and have, perhaps, all along been laying plans to get free. The truth is, if a slave shows any discontent, he is sure to be treated worse, and worked the harder for it; and every slave knows this."

By the time Bradley was 14, his "heart ached" for freedom. He began saving money to buy himself from his master.

After a full day of working from dawn to dusk on a plantation, Bradley would sleep just three or four hours and then begin working for himself. He started by making horse collars, finishing about two each week and selling them for 50 cents. Bradley used the money he made to buy pigs, and planted some corn to feed the pigs. He sold his fattened pigs for more money.

Bradley worked this way for more than five years, and then used the money he'd saved to hire himself away from his master for two years. He used that time to work more, and saved money to hire himself away for another 18 months. After that time, he finally had enough money to buy his freedom in 1833, paying about $700 altogether.

"He's a model for young black people, or Spanish-speaking people or Irish people, for that matter, to understand that we live in a society driven by economics," Westmoreland said. "So he bought his freedom, he learned to read."

As a free man, Bradley moved to free Ohio and settled in Cincinnati. He had his sights on Lane Seminary. Lacking any other formal education, he didn't fit in at the school, but his story moved Lyman Beecher — Harriet Beecher Stowe's dad and the preeminent Presbyterian evangelist of the time.

"I am treated just as kindly, and as much like a brother by the students, as if my skin were as white, and my education as good as their own," Bradley wrote of Lane Seminary.

In 1834, Bradley found himself at the center of the unprecedented Lane Debates. At that time, many who were against slavery supported emancipating slaves and sending them back to Africa to form a colony there. Lane Seminary organized debates on the issue, and Bradley joined the students who favored outright abolition of slavery. Westmoreland said Bradley's unique experience had a big impact on the debate.

"He told them in a first-case basis what it was like to be enslaved, even though he wasn't abused," Westmoreland said. "He didn't give them any color, he just talked about the fact that, 'I'm here through the grace of someone who let me in and I know that I'm not as well-qualified academically as some of the others, but I was to learn, I'm going to learn.'"

After the debates, students voted to support an immediate end to slavery, years before Frederick Douglass shared his story and decades before the Civil War. Oberlin College historian Gary Kornblith said many African-Americans living in Cincinnati at that time were illiterate former slaves, and the abolitionist students began reaching out to teach them.

"[Bradley] says that this idea that slaves can't take care of themselves is ridiculous," Kornblith said. "Slaves take care of their masters and their families now. It will be easier once they are free, not harder."

But the school's trustees flipped and moved to stop students' anti-slavery efforts.

"They wanted to restrict the students, or they were going to expel them," Westmoreland said. "And the restrictions would be, 'You can't do that kind of thing ever again.' And the students said, 'Uh, bye!'"

Bradley and the other so-called Lane Rebels left Lane Seminary with a major donor and went north to struggling Oberlin College, which agreed to let in black and female students.

"This transforms Oberlin, which — not only as a school — is co-educational but now is multiracial, but it also transforms the town," Kornblith said.

The town of Oberlin went from zero percent African-American to 20 percent in 25 years, according to Kornblith.

"Oberlin is one of the first serious experiments in racially integrated living in the United States, and possibly the world," he said.

Bradley disappeared off the historical record after a couple years. But his impact stands.

"No one knows where he ended up, but he was doing two things: He was preaching and she was sharing skills when they last saw him at Oberlin," Westmoreland said. "He was sharing skills with young black people and young white people who wanted to read and write better, and wanted at the same time to improve their abilities to do hands-on things. We have that issue, that need, this very moment."

So the Bradley sitting on a bench in Covington is more the essence of Bradley, rather than an exact likeness. Bradley doesn't hold a remarkable place in history, but maybe he should.

Bradley "was a prototype of Africans brought to America as enslaved people but who had the universal need to be personally, intellectually, culturally and economically free," according to Westmoreland.

"Bradley gave us a model that has been repeated," he said. "Look at the people who taught Frederick Douglass to read: Two of the children of the slave owner were giving him their books and they got busted. The slave owner's wife gave him a couple books, he had a fit. Douglass gave us a constructive roadmap talking about inclusion and the advantage of educating people."

Read Bradley's "Brief Account of an Emancipated Slave" below: