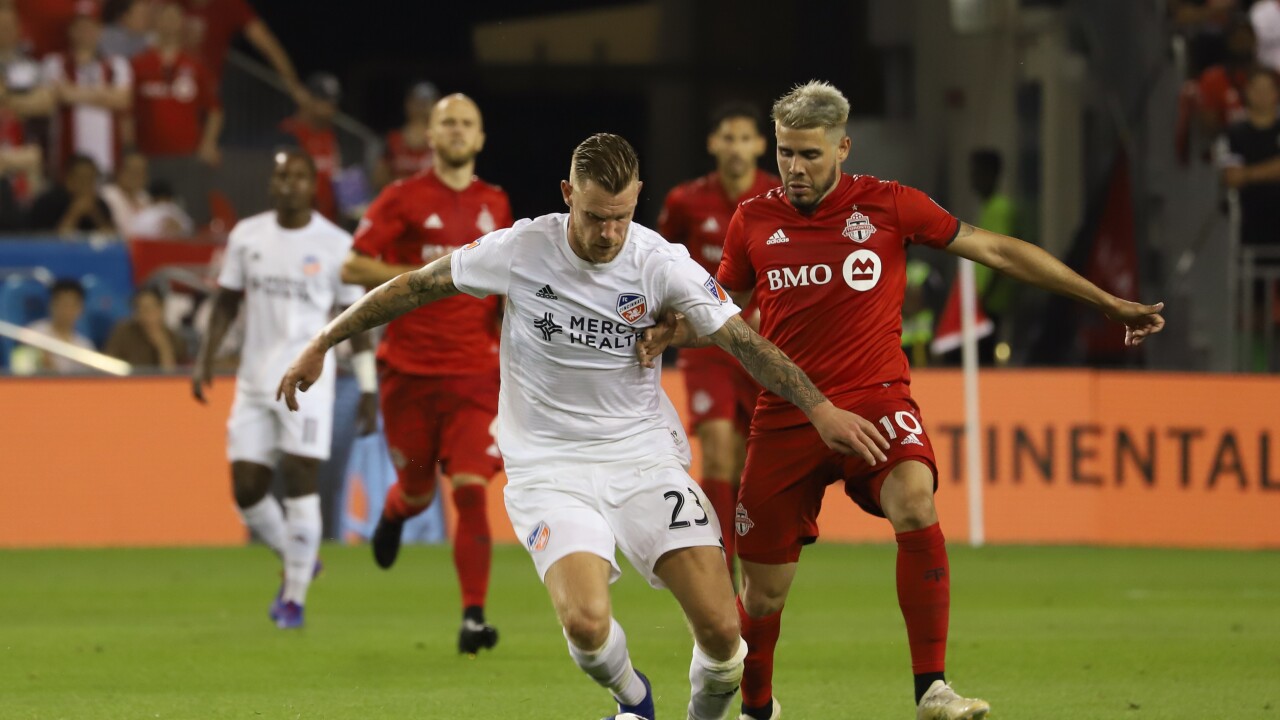 That was evident in how he directed players around him during his debut over the weekend at Toronto FC, and his leadership already seems to be a welcome addition to the back line as he pairs with captain Kendall Waston.

The Orange and Blue bounced back from a slow start against the Reds and had chances to equalize but fell short, 2-1, as van der Werff played the full 90 minutes less than a week after joining the roster. Now, the home fans will get their first live look at the Dutch newcomer when FCC returns to Nippert Stadium on Saturday to host the Vancouver Whitecaps.

“I think he just brought his experience on the field,” Damet said Tuesday when asked whether van der Werff had an impact on the team’s intensity displayed in the second half. “… He just communicated in a clear way in the back, did a great job on the ball but also defensively to give some confidence to the guys. He was strong. We defended with a high line in the second half and did a better job managing the space behind us, so I think it just brings confidence to the group.”

Van der Werff, a native of The Netherlands, spent the last seven seasons playing in his country’s top division, Eredivisie, with Vitesse (2015-19) and PEC Zwolle (2013-15). He began his professional career in the second division with FC Volendam (2008-13) before becoming new FCC general manager Gerard Nijkamp’s first signing with PEC Zwolle in 2013.

FCC inked him to a deal July 2, but the move was pending receipt of his P1-Visa and International Transfer Certificate (ITC) when the Secondary Transfer Window opened on July 9. His paperwork finally came through and he arrived July 18 but had his first full week of practice last week. Van der Werff was looking to make an immediate impact, and although his presence was felt, he was disappointed with the end result.

“It felt good to make my first minutes for FC Cincinnati, and unfortunately we couldn't win,” van der Werff said. “We deserved way more, but we showed great spirit and character. I think we have to build on that onto the next games.”

The 6-foot-1 defender has attended three matches already at Nippert Stadium but now is anxious to get on the pitch in front of the home crowd.

As part of his recruitment to Cincinnati, he was there for the sold-out game against L.A. Galaxy on June 22, and he watched the most recent home matches against D.C. United and New England Revolution from the players’ suite after his visa cleared and he was able to return. FCC is averaging 27,750 fans per game, ranking third in MLS behind Atlanta and Seattle, who play in NFL stadiums.

Van der Werff has played in front of big crowds before, but Vitesse was always on the low end at 15,065 last year. The top two teams in Eredivisie, Ajax and Feyenoord Rotterdam, averaged 52,961 and 41,771 fans a game.

“I'm looking forward to it,” van der Werff said of playing in front of FCC’s fans. “I already saw three home games now from the stands. The crowd is amazing, the stadium is amazing, so I want to play there as soon as possible. This weekend, we will see.”

“My former team, the fans were ... it was not like a soccer city, so it's not like Ajax or Rotterdam or whatever. The stadium also was too big because they could put 25,000 people in and that was way too much, so it felt empty.”

Almost two weeks in with FCC, van der Werff already is settling in. Other players have been helpful in the transition, he said, helping him find a place to live and helping him adjust to the league and new way of doing things. His wife and two young daughters were set to arrive in town Wednesday, and IKEA “has been a good friend” to him, he joked.

Developing chemistry with the guys around him on the field will take some time, but he already seemed comfortable Saturday in his debut and players felt confident in his ability.

“He's a great guy,” Waston said. “He brings a lot of leadership. Obviously, he played a long time in Europe, so he's bringing his experience to the club and hopefully the results can back that up.

“He's very vocal in the game. He communicates a lot, and for us as defenders, that's a key point because we see everything from behind, so we have to communicate to our midfielders, to our forwards what we want, what we are seeing, where is the danger, so he's a really vocal guy and someone who can help this club.”