What does it take to be an animal mascot? Baby bearcat Lucille has some tips

She took all the noise and commotion in stride 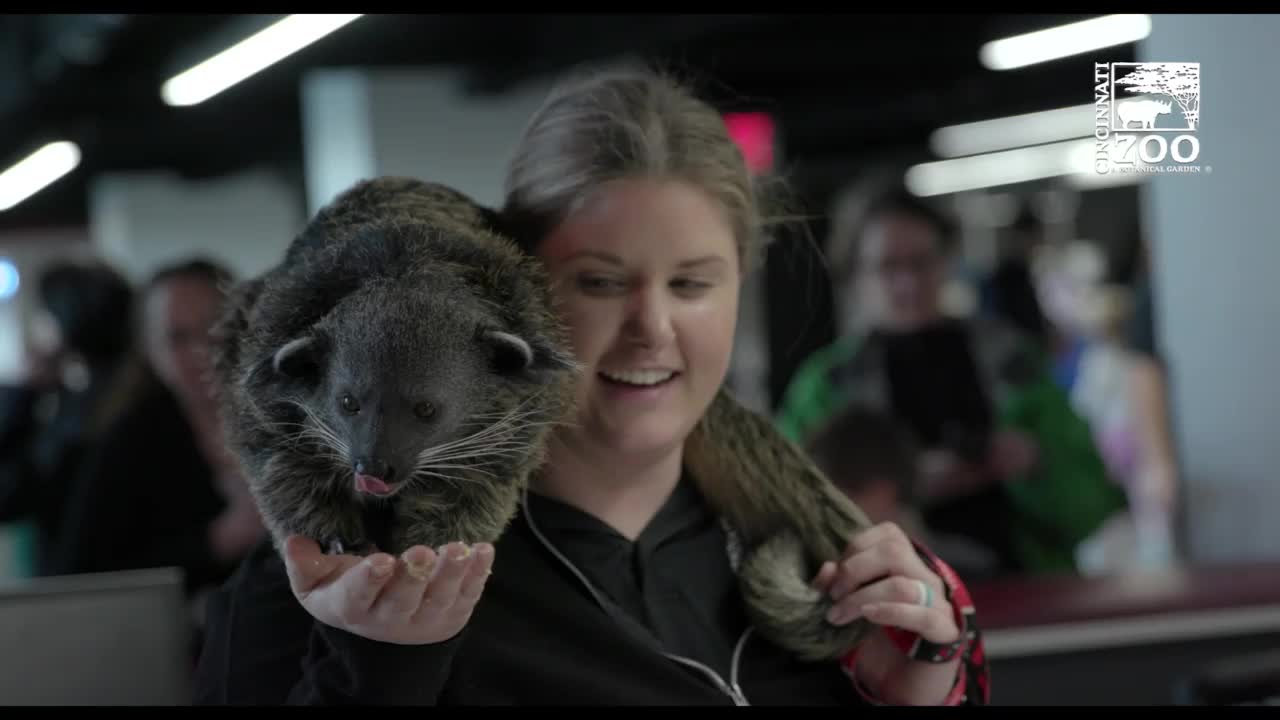 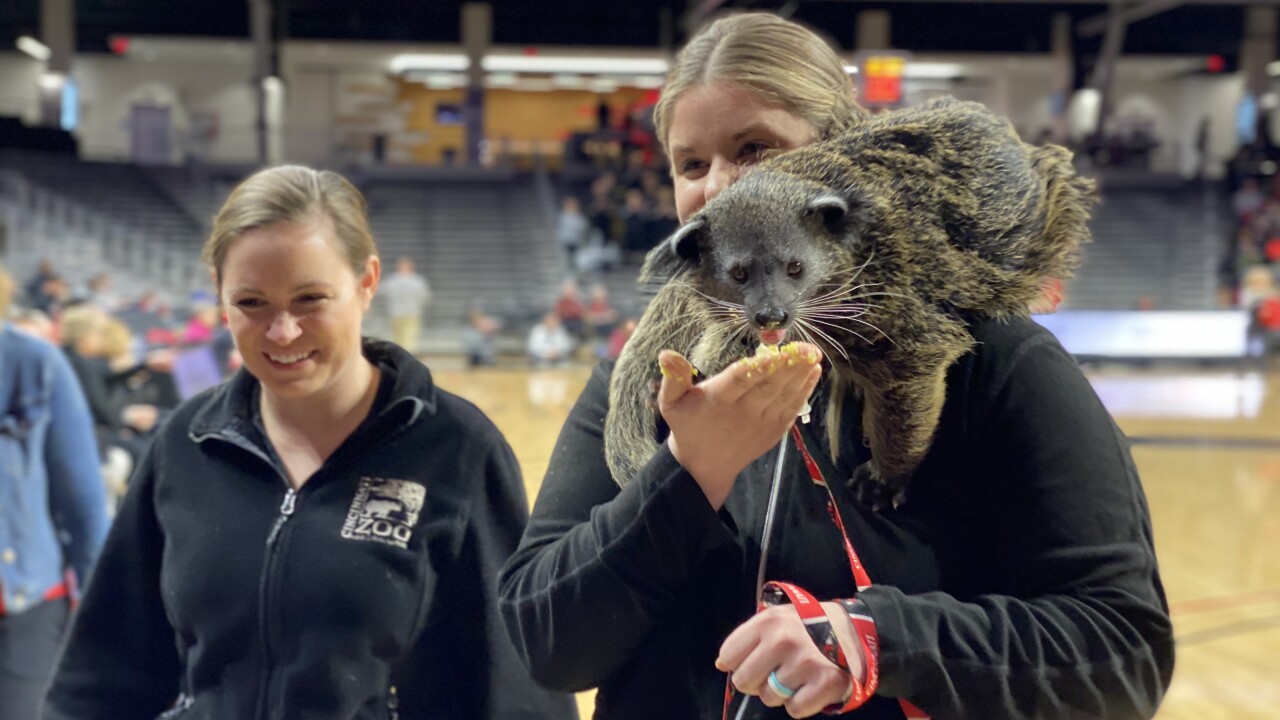 So how did the Cincinnati Zoo & Botanical Garden’s ambassador in training do before 2,000 cheering fans?

“It was wonderful. She was so amazing,” said care team leader Sarah Swanson. “All the noise and commotion she handled in stride. She just wanted to get down and be curious.”

During the game between UC’s women’s basketball team and the Tulsa Golden Eagles, Lucille met her human counterpart, the UC bearcat mascot, for the first time. Swanson said the baby bearcat seemed initially confused by the giant, fuzzy creature; then she decided to investigate.

“She was curious and smelling him, and she looked like she was going to climb on his head, so we decided they were done, but it was a great first meeting,” Swanson said.

The making of an ambassador

It takes a lot of TLC to transition a baby bearcat to a celebrity, Swanson said. After Lucille arrived at the Cincinnati Zoo & Botanical Garden from the Nashville Zoo in October weighing just over 500 grams, the infant received round-the-clock feedings and attention from her care team, Swanson said. As the baby bearcat grew, the team transitioned Lucille to a normal feeding schedule.

“(Lucille) is such an interesting animal because she has such a great personality,” Swanson said. “She’s very curious and confident. She’s cautious at times, but she’s never shown us at any time that she’s really scared of anything.”

Acclimating Lucille to the world of college sports involved lots of preparation, Swanson explained, starting with transporting her back and forth to UC multiple times in her travel carrier.

The care team next familiarized her with the sights, smells and sounds of Fifth Third Arena by bringing her to UC marching band, cheerleader and basketball practices on the court.

“They ran the scoreboards, the sound system and the music; she even heard the horns and the buzzers,” Swanson said. “So she was pretty well-exposed. The only piece missing was the crowd being there.”

When Lucille made her debut, her care team looked for signs the bearcat was completely comfortable with all the goings-on, Swanson said, making sure she wasn’t tightly gripping her handler’s shoulders or showing other signs of stress.

She said the animal’s comfort is the care team’s primary concern, and it’s always Lucille’s choice whether to participate in events.

“Her handler said she was very relaxed the entire time, eating,” Swanson said. “The whole way we paired a positive reinforcement, being food for her, with each new step. So she’s learning that fans screaming and cheering for her is good, because she gets a hard-boiled egg and banana and all the good stuff that she really likes.”

Although Lucille will prioritize appearances at UC sporting events, including men’s and women’s basketball, baseball and football games, Swanson said the bearcat isn’t simply a college mascot. Lucille is part of the zoo’s ambassador program and serves to educate the public about her species, also known as the binturong.

In addition to her UC appearances, Swanson said, Lucille also will participate in community events that allow people to get close enough to care for this threatened South East Asian species.

“She helps us get that word out and talk about bearcats not being a mythical animal,” Swanson said. “It’s a real thing, and we’re excited to share her with the whole city.”

Swanson said Lucille, currently 6 months old and weighing 12 pounds, will grow to only about half the size of her predecessor Lucy because she is part of the smaller Palawan binturong subspecies.

Lucille will most likely top off around 25 pounds, which is good news for the six care team members who will have her wrapped around their shoulders, Swanson said.

“Lucile’s going to have a habitat over at UC that will be able to be transported to all the different athletic events,” Swanson said. “It will allow her to hang out with her handlers before and after events and give her a place for downtime during games.”

Meanwhile, former bearcat ambassador Lucy seems to be enjoying retirement, said former handler Eddie Annal. Annal said Lucy is relaxing behind the scenes in a spacious indoor/outdoor habitat. Eventually, she will move to a permanent habitat, where her fans will be able to visit her, he said.

Annal hand-raised Lucy from a baby and eventually became her sole handler. He carried 40-pound Lucy on his shoulders for 11 years to more than 200 games. However, one day she suddenly decided not to go.

“I’ve heard from other people who work with binturongs they get a little more unpredictable as they get older. But for over a decade, that’s a good run for an animal ambassador,” he said.

He compared Lucy’s retirement to an actor stepping away from the limelight.

Annal said he often visits his former partner to check on her, but unfortunately the separation anxiety seems to be one-sided.

“I think she’s content just having space to roam and climb and get fed, and I don’t think she’s one to miss that contact with me,” he said. “She looks pretty happy.”