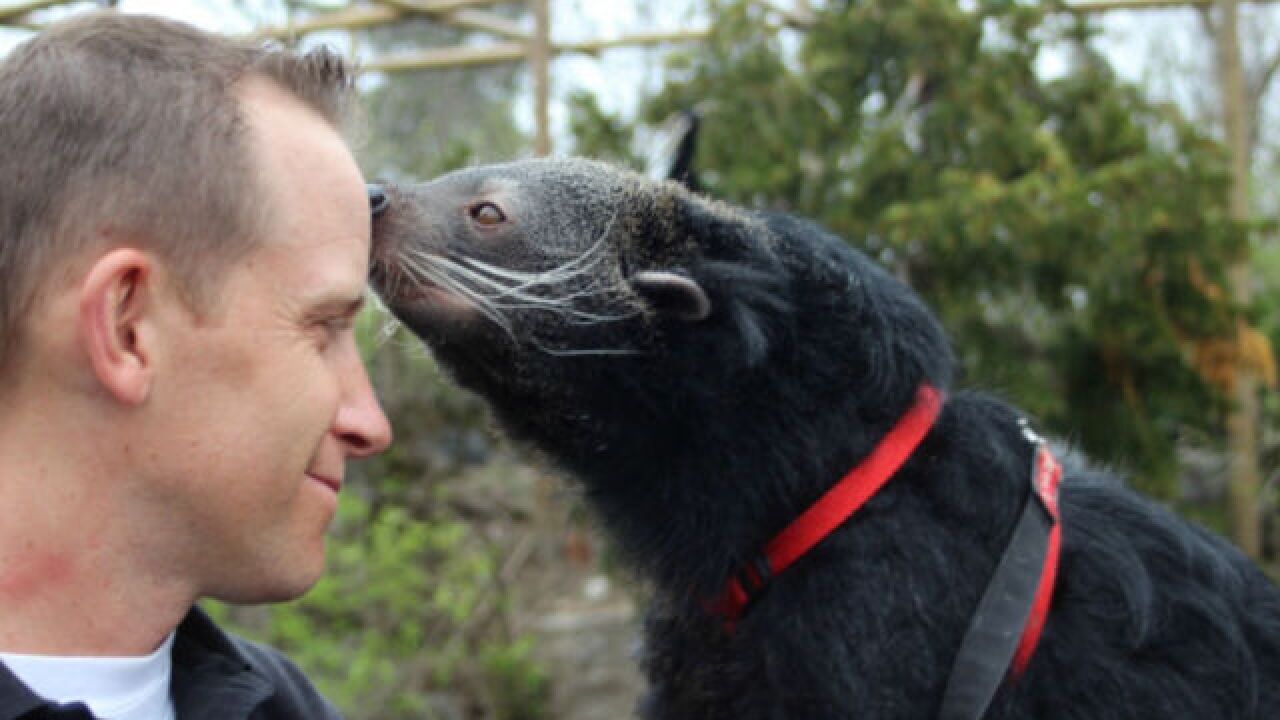 <p>Eddie Annal, the Cincinnati Zoo’s trainer for Lucy the bearcat, has known the 8-year-old animal since she was 8 weeks old and fit in the palm of his hand. Christine Charlson</p>

CINCINNATI -- With the University of Cincinnati's basketball season ending in heartbreak at the NCAA tournament, Lucy the bearcat may be down, but not out of the game. The dedicated mascot continues to cheer on her UC teams, moving from the indoor arena to the baseball diamond.

In order to get a glimpse into the life of UC’s non-human mascot, we caught up with Cincinnati Zoo’s bird and bearcat trainer Eddie Annal. During Lucy’s regular walk along the gibbon island bridge rail, Annal (equipped with pockets filled with hard boiled eggs and bananas) answered our questions.

Q: How did Lucy get chosen as mascot?

Annal: In the past, we had bearcats that went over to UC, and we wanted to rebuild that relationship. Before Lucy it was Alice, and Mike Dulaney hand-raised her. We already had a bearcat here, but we needed a similar situation where we had a hand-raised baby. There’s not many places that breed bearcats, so that’s why we got it from a private breeder in Texas. So she was picked before she knew she was picked.

Q: As a bird trainer, how did you get paired with a bearcat?

A: It probably should have been someone from the cat show, but they were raising a baby cheetah at the time and didn’t have the extra resources to hand-raise a bearcat too. Whether it be feathers or fur, the principles are still the same in training and developing a relationship with an animal, and then also going out and interacting with the public. That’s stuff we kind of did anyway as part of the bird show, and so it’s just an extension of that –- and a good opportunity to learn about something that doesn’t have feathers.

Q: How many events does Lucy attend a year?

A: About 20 basketball games and about 10 baseball games depending on the weather. We usually do football games, but in the past two years we haven’t just because of Paul Brown (Stadium) and the new stadium configurations. But we usually do about five or six home games and other events here and there – so I’d say it’s about 50 total.

A: It’s hard to tell. I don’t know if she’s got a preference, but being outside, I think she might like baseball more, because she gets to be outside and smell the outside. I know she’s not a big fan of day basketball games when it’s like a noon game, because bearcats are nocturnal. So those noon games, it takes her a while to wake up – and as soon as we get to the stadium, she usually goes back to sleep.

Q: How does she spend the off-season?

A: We’ll do a lot more going on walks around the zoo at the end of the day when it’s quiet. Also during the summer, there are some evening events, special fundraisers and parties at the zoo, like Wild About Wine, and she stays pretty busy with those. The biggest stipulation is rain. Even though bearcats are found in the rainforest, she’s been inside her whole life, and she really hates rain. I don’t know, maybe it’s the feeling of it on her fur.

Q: Any professional jealousy between her and the other mascot?

A: She loves the other mascot – she loves the mascot’s bearcat head. She’s very scent-oriented, so she always goes right to the head and sniffs, because I think the head has all kind of smells on it. You can tell she really likes it when the mascot comes around. And it also makes for great photo ops when she’s sniffing on the other mascot’s head.

Q: Any other things we may not know about Lucy?

A: She has stinkier days than others. She smells like stale Fritos or popcorn. I didn’t notice it. I just thought she smelled like a bearcat, but the other day we were at the movies, and I thought, oh my gosh that really does smell like Lucy some days. So it’s true that she does smell like popcorn on certain days. The smell varies depending on the season. She’s technically in a group of animal called civets, and because of the group of animals she’s in, they all have a little bit of a smell to them.

A: It’s awesome. It’s been really cool. She weighs about 40 pounds, but she has really good balance, so she’s well-distributed on my shoulders. If you picked up a dog that’s 40 pounds and they’re not used to being held, it’s kind of awkward, but I’m just like a movable tree that has treats. So she’s pretty used to keeping her balance on me. She uses her tail like a fifth arm to hang on, so that's why she wraps it around things. She also uses her nails, which is why she gets a pedicure about every two weeks – and she's gotten a lot better about it. She’s 8 years old, and hopefully she’ll live into her teens and maybe early 20s. I’ve known Lucy since she was 8 weeks old and she could fit in the palm of my hand. So it’s pretty neat being able to follow her.