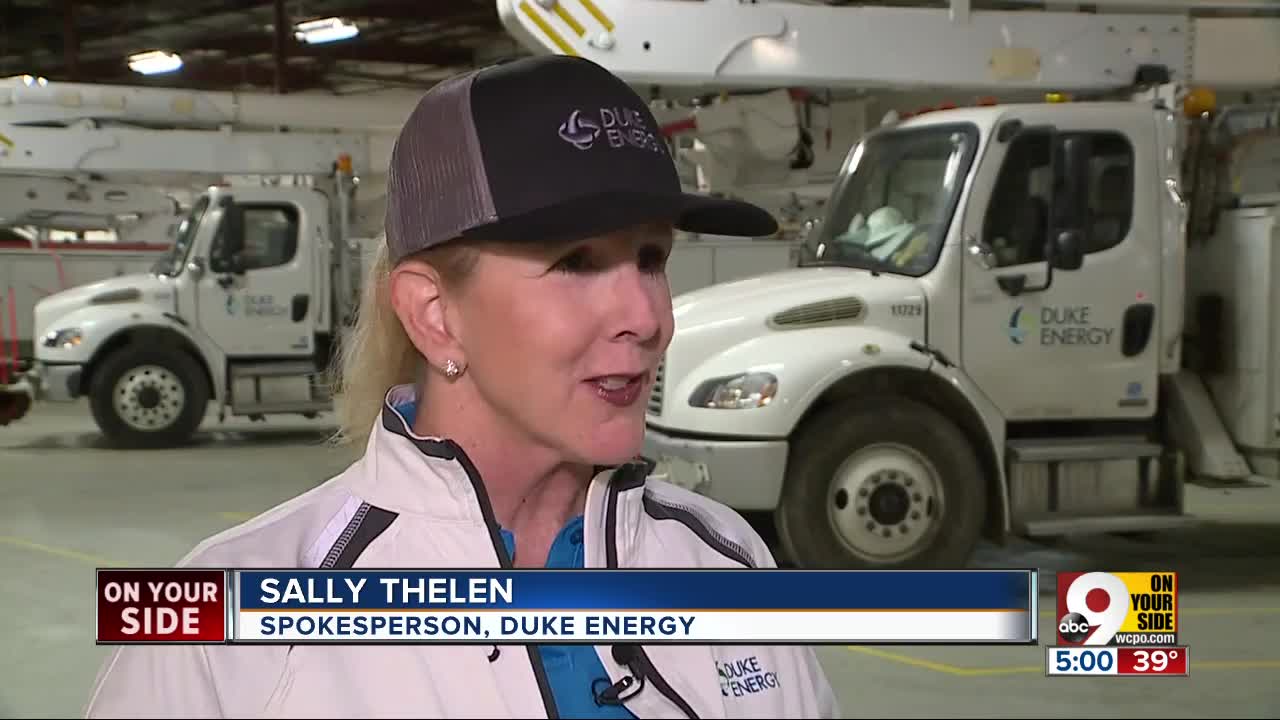 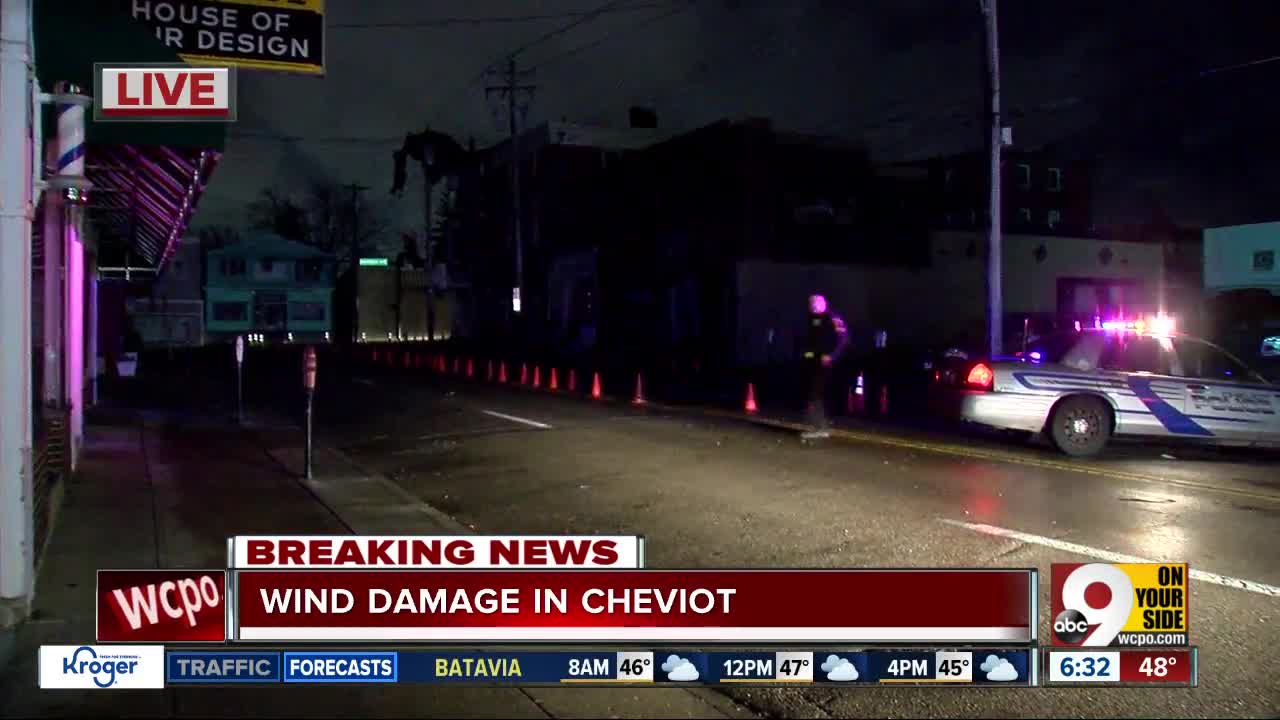 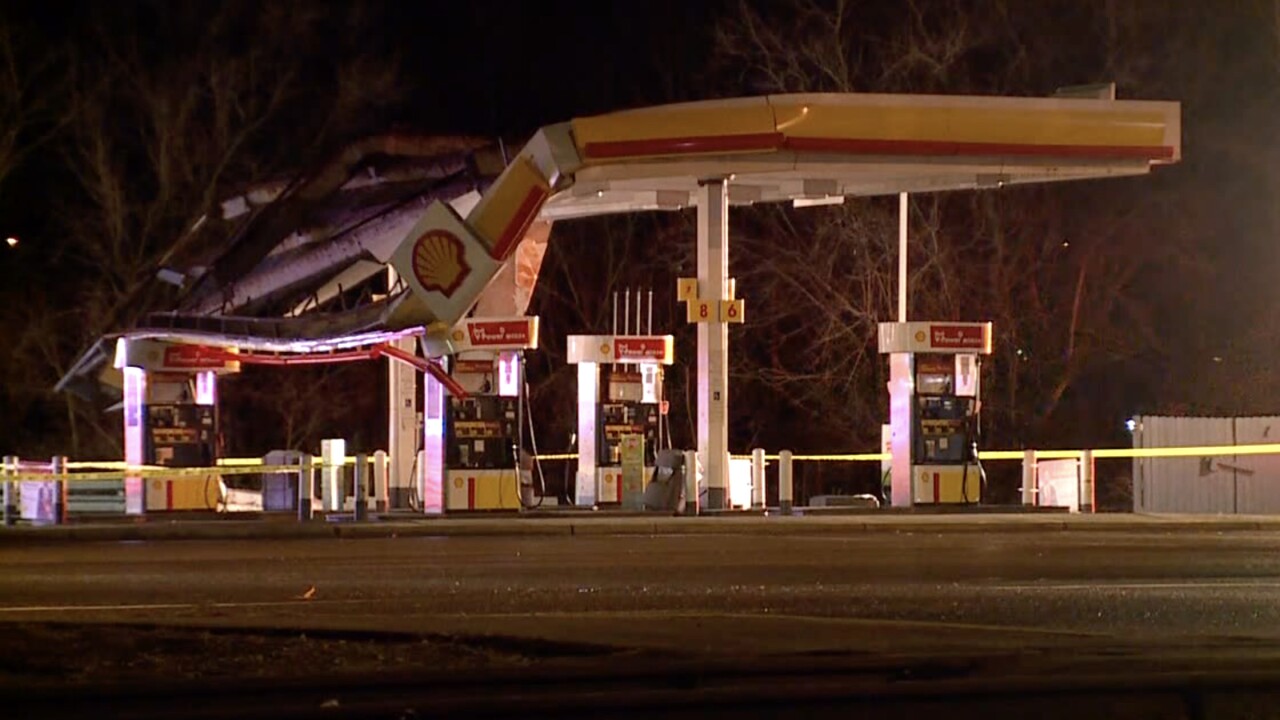 CINCINNATI — As high winds and rain moved through the Tri-State Monday morning, more than 22,000 Duke Energy customers woke up without power.

A wind advisory was issued across the Tri-State as winds reached 54 mph.

Hundreds of crews worked all day to restore power and clear downed trees from power lines throughout the region. By evening, Duke reported fewer than 250 customers still in the dark.

The Hamilton County Sheriff's Office said part of the roof of the Arms and Accessories store in Cheviot was torn off due to the wind, closing North Bend Road for part of the morning. There is no word on any injuries.

The wind also caused the roof of the Shell gas station on U.S. 50 in Aurora, Indiana to partially collapse. Part of the awning gave way around 3 a.m. Monday after being battered by strong winds and heavy rain. The gas station was not open or staffed when the roof fell, and no injuries have been reported.

Here you go... the wind damage in Aurora at the Shell gas station on US 50 in the heart of town. @wcpo @cincywx @NWSILN pic.twitter.com/Ut5MheKc7b

Duke Energy officials said, despite the holiday season, Duke had full resources available and worked to bring power back as quickly and safely as possible.

"There's a lot of people that aren't used to seeing us at this time of year if it's not an ice storm or snow storm," said Sally Thelen, spokesperson for Duke Energy. "This is kind of a crazy wind event."

The company said it prioritizes bringing back power to important establishments like a 911 center, police, fire, hospitals and schools. Duke officials said it is helpful to their efforts that most schools are still currently out on break for the holidays.

"A lot of the outages are large clusters of transmission line outages, so when we're able to bring in transmission line that's gone out, once we make that repair, we can bring out thousands at a time, which is what we've been seeing throughout the morning," said Thelen.

Duke Energy officials also asked that drivers be courteous as crews are working to get power restored; drivers should slow down and give workers and their vehicles space as best they can to help crews get their jobs done safely and efficiently.

For homeowners who may have experienced damage from falling trees or debris, AAA has a list of things insurance does and does not cover available.