Behind the scenes of the Aronoff's 'Lion King': 350 costumes, five-foot flutes and 'a puppet ER' 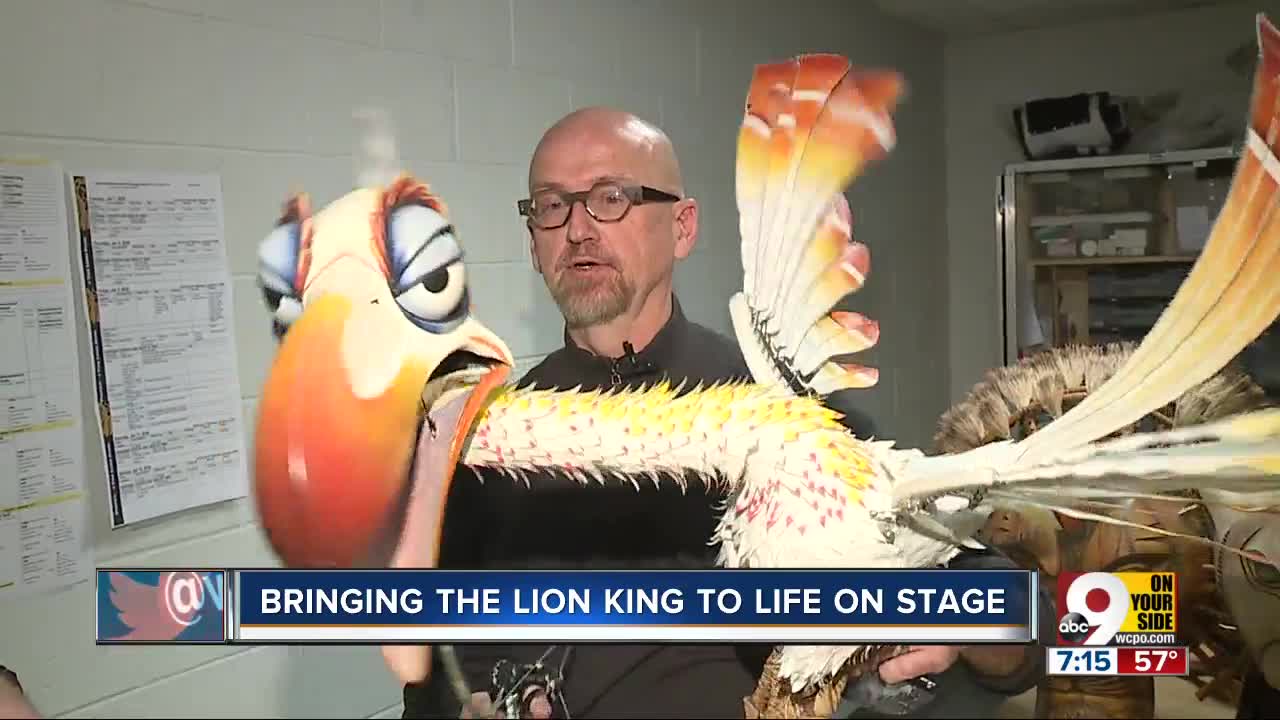 , it is a massive undertaking backstage before, during, and after each performance. Broadway in Cincinnati gave WCPO a look at how it all comes together.

CINCINNATI — Simba, Nala and the rest were still singing in Rochester, New York, when Pride Rock arrived in Cincinnati. The four-week return of "The Lion King" to the Aronoff Center for the Arts required a head-start to be ready in time for opening night on Jan. 11, according to production designers who arrived early with sets in tow.

So what was happening to the Rochester show while the work started in Cincinnati? Was the circle of life unfolding on an empty stage?

That means there are two versions of Pride Rock on each tour. One arrived in Cincinnati two stops ahead of the cast so the crew had more time to set up.

And they need it. Crew members said "The Lion King" hits the road in about 17 tractor-trailers — and that's traveling light compared to some of the Tony-winning show's earliest tours.

Even when all the pieces have arrived, the beloved musical is a massive undertaking backstage before, during and after each performance. Broadway in Cincinnati gave WCPO a look at how it all comes together.

'All of us have a little bad guy in us'

It took Spencer Plachy weeks to learn how to become Scar, the villain in the Hamlet-inspired story. Performances in "The Lion King" are more than lines and lyrics — they also require actors to perform in elaborate animal masks, many of which have moving pieces.

"It took my full four or five weeks of rehearsal plus some little speed bumps in the first couple of performances to coordinate that," Plachy said.

Most audience members won't notice the small black trigger in the palm of his hand. It controls the Julie Taymor-designed Scar mask above his head, which lunges forward at his command.

The entire mechanism is strapped around his head, under his chin, and connected through wires to controls strapped to his legs. His costume hides most of it.

"When it's accompanied with my body movement, it looks incredibly fluid," Plachy said.

Plachy told WCPO his interpretation of Simba's uncle pays tribute to the animated film's original Scar, played by Jeremy Irons, but he also drew inspiration from another Disney villain: Shere Khan, of "The Jungle Book."

"I think all of us have a little bad guy in us," he said. "When you get to play a part like this, who's the straight-up villain in a big story like this, you can pretend to actually let that bad guy out, and it's fun because it's safe."

More than 200 puppets, some more intricate than others, accompanied the sets to the Aronoff. They include animals of all kinds.

The most intricate, though, is the hornbill Zazu, whose eyes, mouth, and wings all move independently.

The Zazu actor has an understudy in case he gets sick; the Zazu puppet has one in case something breaks. Reik said his team has to be ready to jump into action and make fixes fast.

"There's always something new that goes wrong, so I'm constantly learning things," he said. "During the show, we're essentially like a puppet ER, ready for anything that can go wrong."

From Broadway to tour

The costumes are among the most eye-catching elements of the show's production design. Designed by Julie Taymor, who directed "The Lion King" in its 1997 Broadway debut, they transform humans into plants, animals and even set pieces.

The costumes comprise everything from grasslands headdresses to a pleated dress that opens up to transform into a colorful plant. There are 350 pieces that travel, 250 of which show up on stage each performance.

"The size of it makes it a challenge," said wardrobe supervisor Gregory Young.

Young spent 11 years with the show on Broadway, and 2020 will be his 11th year touring.

"Everything is the same as opening night," he told WCPO. "There's no straying with 'Lion King,' so everything stays the same. The only thing that may have changed is materials."

Inspiration from around the world

The show's music features all the songs you loved from the original 1994 animated film, written by Elton John and Tim Rice. There is also material written specifically for Broadway by Lebo M, Mark Mancina, Jay Rifkin, Julie Taymor and Hans Zimmer.

At the heart of the score are what flautist Darlene Drew calls "savanna sounds." She plays 13 different flutes from around the world during the course of the show. They range from the size of a toothbrush to five feet tall.

Each flute has a unique identity, sometimes specific to a character in the show.

The small flute plays like young Simba and Nala. For Scar, Drew uses a large adaption of the Peruvian pan flute — it's more percussive, she said.

Drew has played with "The Lion King" tour off and on for 17 years.

"It remains a challenge," she told WCPO. "I can't coast."

"The Lion King" runs at the Aronoff Center Jan. 11-Feb. 2. There are nine shows per week running Tuesday through Sunday and two shows each on Thursday, Saturday and Sunday.

Tickets are limited but available at lionking.com, CincinnatiArts.org, by phone at 513-621-ARTS, and the Aronoff Center Box Office.