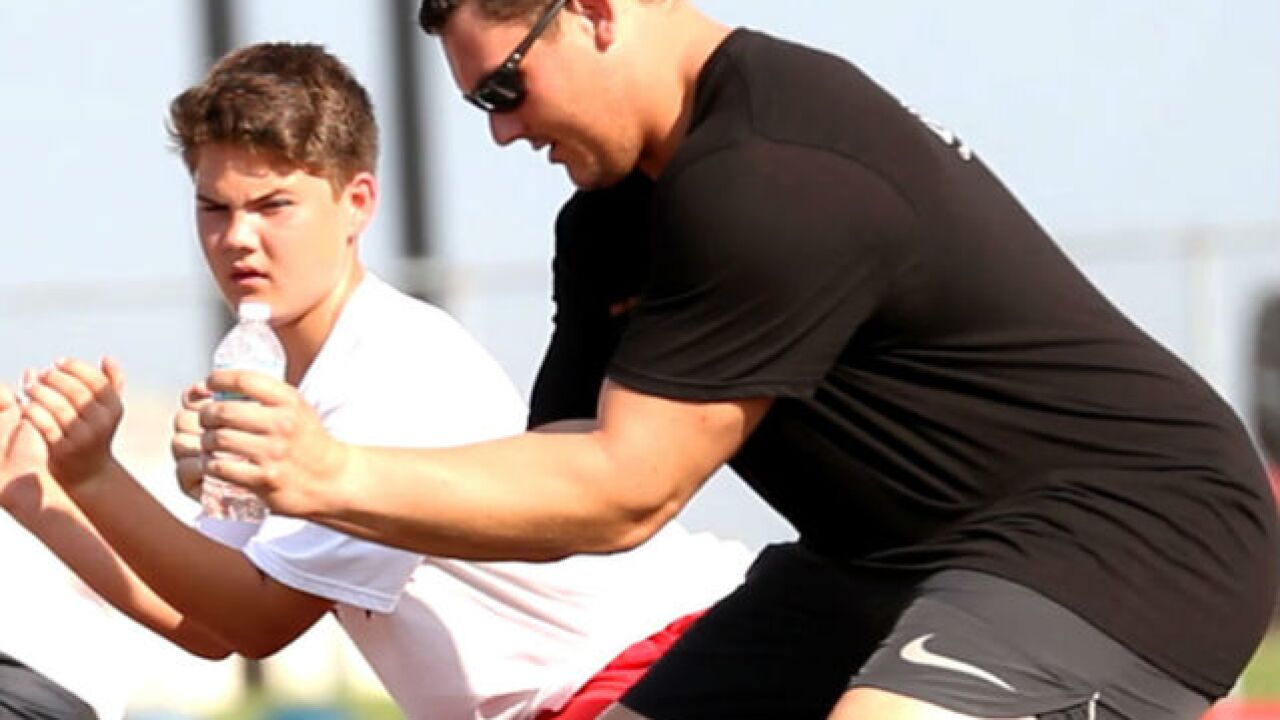 “He’s a leader and he always has been,” Lakota West coach Larry Cox said. “That’s the neat part.”

For Kelly, a 2011 Lakota West graduate, Friday was a chance to give back to the high school community that has supported his journey as an All-American in high school and college and an NFL first-round draft pick in 2016.

“High school was one of the best times of my life,” Kelly said.

Kelly, 24, still appreciates the memories of competing on Friday nights with the Firebirds then waking to eat breakfast down the street at McDonald’s, watching game film and the junior varsity game and checking out the college games the rest of the day.

“You will never know as many people in the crowd as you do when you play in high school,” Kelly told WCPO.com. “Literally all your peers and all the people you go to class with are in the stands cheering for you. That’s kind of the cool thing about playing at the high school level. Sometimes it kind of gets forgotten because everybody sees that they want to play in college but they kind of skip what’s here right now.”

Kelly instructed the linemen on technique on a humid Friday morning wearing his camp shirt and sunglasses. The 80-plus campers from grades 7-12 were able to receive advice from one of the NFL’s most promising young players in Kelly along with former NFL fullback John Conner, a 2005 Lakota West graduate.

“Four years later I don’t want them to regret not having the great opportunity of playing in high school and enjoying it,” Kelly said. “Friday night is the best.”

The camp featured mostly players from the West Chester area. Lakota West senior defensive lineman Tyler Bentley (Kentucky verbal commit) and sophomore quarterback MyJaden Horton, one of the area’s top recruits in the 2020 class, were among those who participated in the various line and passing drills, respectively.

“I think it’s a great idea and great for the school,” said Conner, who works at Ignition in performance training. “Hopefully it is able to build for years to come.”

Hicks, the Philadelphia Eagles standout out linebacker and 2010 Lakota West graduate, was unable to attend due to an injury he suffered this summer. But the plan is to have the second Hicks/Kelly camp in mid-June 2018 and to expand its reach.

“Cincinnati is such a hub for high school football,” Kelly said. “You look at it -- I went to Alabama, Jordan went to Texas -- there is a ton of guys that go to Ohio State. There are all these different schools around the country. So if we can kind of combine forces and bring them here, I think it’s better exposure for all the high schools in Cincinnati and it’s going to draw attention from the nationwide coaches. So in a nutshell, that’s what we’re thinking.”

“We feel so strongly about the program and all the players that come here,” Kelly said. “This is just a way to give back. We’ve been through the recruiting process. We’ve seen it all from the beginning to the end. We’ve seen the good and bad things that happen with it. We kind of wanted to combine forces with the college coaches.”

Cox said he appreciated what Hicks and Kelly have done to give back to the program. Both players helped with funds to refurbish the Lakota West weight room.

“I think No. 1 it speaks to the community,” Cox said. “You want to come back because you enjoyed your childhood; you enjoyed the people you grew up with. You enjoyed the whole experience. Football is just a small part of it.”

Despite a busy schedule, Kelly tries to make it back to West once or twice a year.

Kelly will start training camp with the Colts July 29. He is more confident entering this season as opposed to his rookie year where he learned a lot despite arriving from a pro-style offense at Alabama.

“It was amazing the level from just college to the NFL,” Kelly said. “In college, you are playing an elite guy every three or four weeks. A real elite dude that you have to game plan for. In the NFL, you are going against a guy who may be 30 years old and who has been in the league eight or nine years and he is in the prime of his game right now. That’s every week.”

The longer season was an adjustment, too. However, Kelly was only the fifth Colts rookie to play in 16 games for Indianapolis.

Kelly, a Rimington Trophy winner at Alabama, enjoyed learning about the demands of the NFL last season. He knows he is better prepared this fall.

“Learning the snap count was one of the hardest things because there are so many more than there were in college,” Kelly said. “I had Andrew (Luck) back there and he is holding me to a higher standard and the whole line is holding me to a higher one. I know I have to make all the calls. Every day I was just literally in my playbook. I knew I was going to mess up until I got it right. Now at this OTA (Organized Team Activities) the guys trust me a lot more so that’s kind of a cool feeling.”