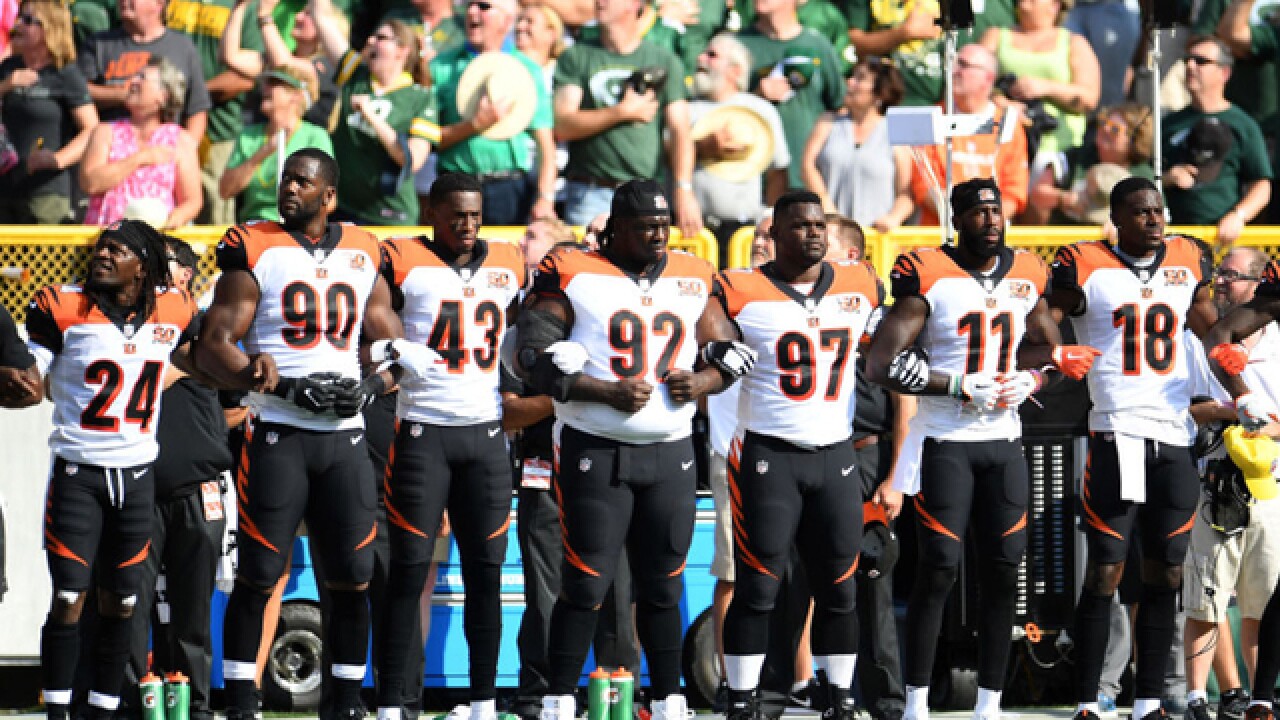 CINCINNATI -- Some of the Cincinnati Bengals locked arms during the national anthem at their game in Green Bay Sunday as a response to comments President Donald Trump made about football players who kneel in protest.

The players were not alone in wanting to respond to Trump's remark that team owners should say "get that son of a b---- off the field right now, out, he’s fired, he’s fired" when they kneel during the national anthem. Across the league, more than 100 players sat or kneeled during the anthem Sunday.

Colin Kaepernick was the first player to kneel during the anthem last year. He sought to draw attention to institutional mistreatment of African Americans.

Bengals coach Marvin Lewis said Sunday the players were showing their support for veterans and the military, and weren't going to let divisive words divide them.

Keith Maupin, a local veteran and the father of Army Staff Sgt. Matt Maupin, who was killed in action in 2004, said he believed players sitting or kneeling during the national anthem wasn't right.

Maupin has vowed to stop supporting businesses that sponsor the league.

"Pretty much, they can kiss where the sun don't shine," he said. "It's pretty simple, you know, for me. I don't have to watch football. I'd rather go fishing, and I think that's what I'm going to do."

On the other side of the issue, Senior Historian Carl Westmoreland with the National Underground Railroad Freedom Center said he doesn't see anything wrong with what the players did.

"I don't think it was disrespectful, and if my son had been involved I'd be very proud," he said.

Westmoreland said he believes this is an opportunity to bring awareness to divisiveness and find ways to bring people together.

"I think we've all achieved the right to be able to talk about our differences, and I can't criticize their style because it was non-violent," he said.

In a written statement Sunday, the Bengals said: “Football and politics don't mix easily. Fans come to NFL games to watch great competition on the playing field and that's where our focus should be."