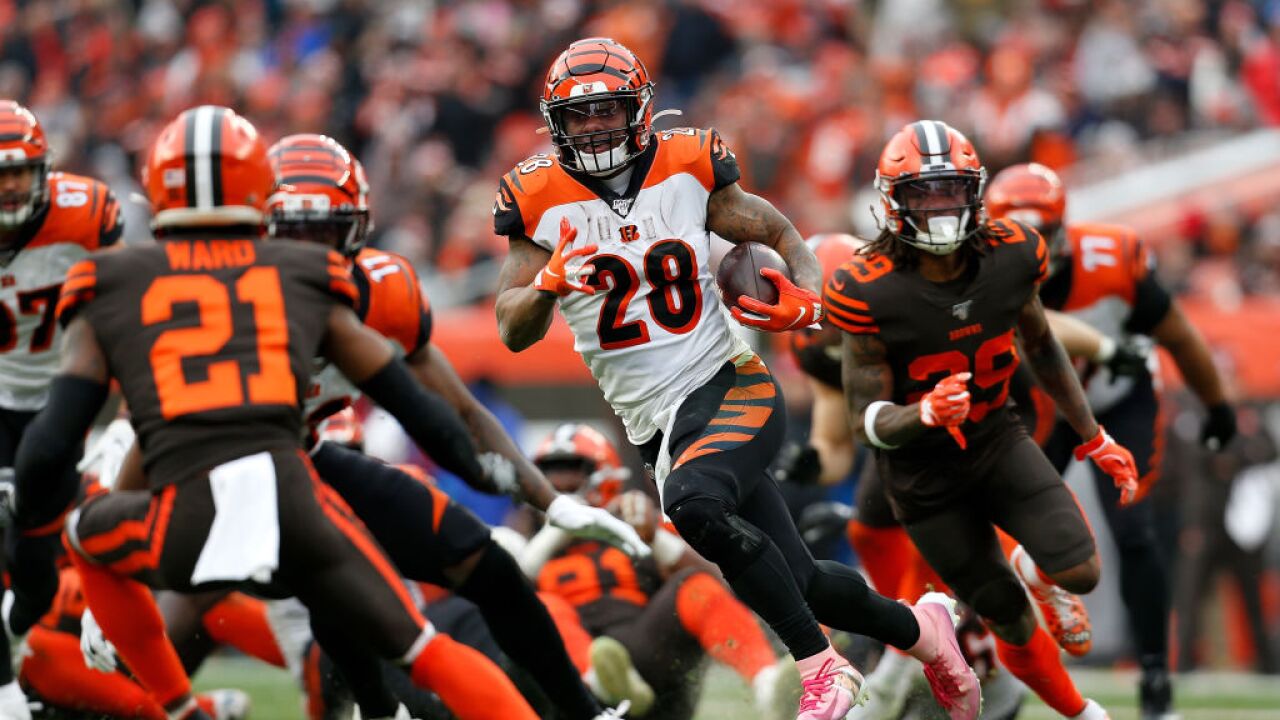 Copyright 2019 Scripps Media, Inc. All rights reserved. This material may not be published, broadcast, rewritten, or redistributed.
Kirk Irwin/Getty Images
CLEVELAND, OH - DECEMBER 8: Joe Mixon #28 of the Cincinnati Bengals runs with the ball during the first quarter of the game against the Cleveland Browns at FirstEnergy Stadium on December 8, 2019 in Cleveland, Ohio. (Photo by Kirk Irwin/Getty Images)

CINCINNATI — Joe Mixon had trouble getting back to the line of scrimmage on many of his carries in the season’s first half, a result of the Bengals’ inability to block.

With three games left, he’s on a resurgence.

Mixon is performing at an elite level again as the Bengals (1-12) get ready to host the Patriots (10-3) on Sunday. He ran for a career-high 146 yards during a loss in Cleveland last week.

“I’ve just been riding the wave,” Mixon said Wednesday. “That’s pretty much what I’ve been doing, trying to master what we do best.”

Mixon led the AFC in rushing last season with 1,168 yards despite working behind a struggling line. The blocking was even worse at the start of this season and teams regularly stopped Mixon in his tracks.

The low point was a 27-17 loss to Jacksonville on Oct. 20. Mixon got the ball only 10 times and wound up with 2 yards total as he got swamped in the backfield.

At that point, Mixon had only 254 yards in seven games, prompting the coaching staff to redesign the run game during a bye week. The blocking schemes changed — interior linemen began pulling more — and the game plan included toss plays to get Mixon in space more often.

He carried 30 times for 114 yards in a loss to Baltimore, his first 100-yard game of the season. In the past five games, he’s picked up 469 yards — third-most in the league — and he leads all running backs with 105 carries.

“I think we are starting to build an identity,” Mixon said.

The Patriots have the league’s top-ranked defense and are No. 4 against the run. The Bengals’ revised blocking schemes and play calling will have their biggest test.

“They’ve got different ways of playing and you may not know what you’re going to get when you get into the game,” quarterback Andy Dalton said. “So there’s the element of: What are they going to do?”

The running game languished early in the season in part because the Bengals became a pass-heavy offense. They’ve gone back to Mixon and gotten the results that they’d envisioned in the run game. The problem has been an inability to produce big pass plays with the receiving group depleted by injuries.

“Joe has been everything we’ve needed him to be, both as a leader of our team and a featured back,” offensive coordinator Brian Callahan said. “He’s been a spark for our offense, there’s no question.”

Coach Zac Taylor said Mixon has been one of the most locked-in players during team meetings, even when he wasn’t getting many carries in a game.

“When he’s sitting there when we install plays early in the morning on Wednesday and Thursday, he’s one of the guys that I can say every single day I’ve been here presenting in front of a group is very wide-eyed and paying attention to everything you say,” Taylor said.

Tackle Jonah Williams was cleared to join practice Thursday for the first time this season. The Bengals’ first-round pick (11th overall) in 2019 has not played this season due to a shoulder injury during June OTAs. Williams now may practice without counting against the 53-player roster limit. The team may choose to activate Williams to the roster at any time during the remainder of the season.

NOTES: Bengals players and coaches declined to say anything specifically about the NFL’s investigation of the Patriots for videotaping Cincinnati’s sideline during a game in Cleveland last Sunday. “It is in no way, shape or form a distraction for us,” Taylor said. ... Receiver A.J. Green didn’t practice Wednesday, an indication he won’t return against the Patriots. Green had ankle surgery during training camp and has missed every game. The Bengals continue to carry him on the active roster. Taylor said Green, who can become a free agent after the season, still wants to play in one of the final games. ... Receiver John Ross was limited in practice because of a foot injury. He returned from a shoulder injury and had two catches in Cleveland.