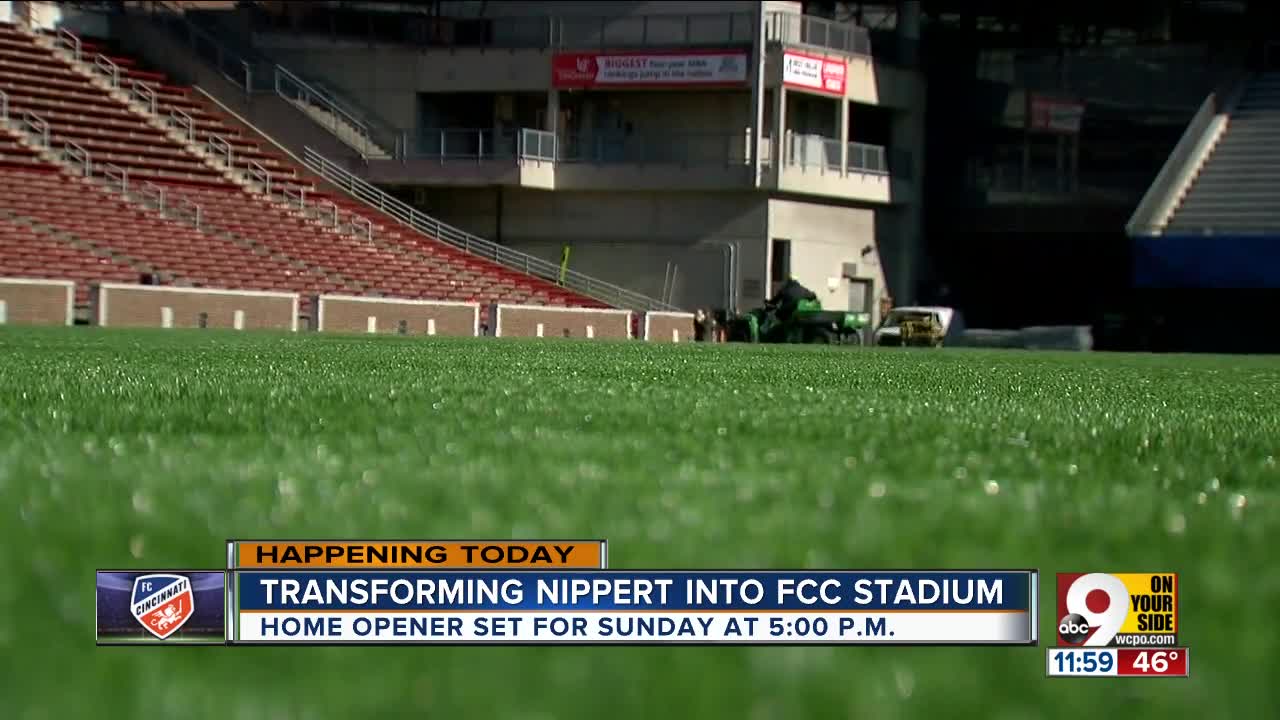 Starting Monday, crews will work to transform the field from a football stadium to a soccer pitch. Workers will paint the field Monday afternoon, and by Tuesday night, Nippert Stadium will be ready for the club’s inaugural MLS home game Sunday against the Portland Timbers. 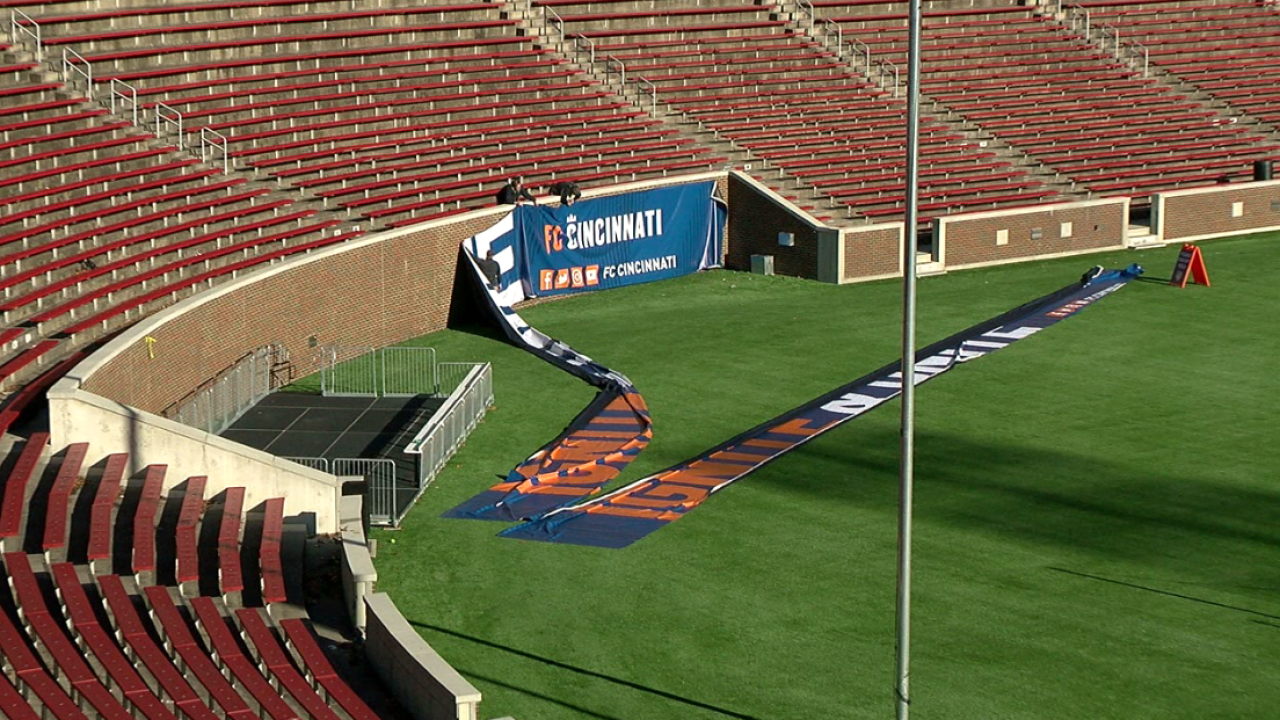 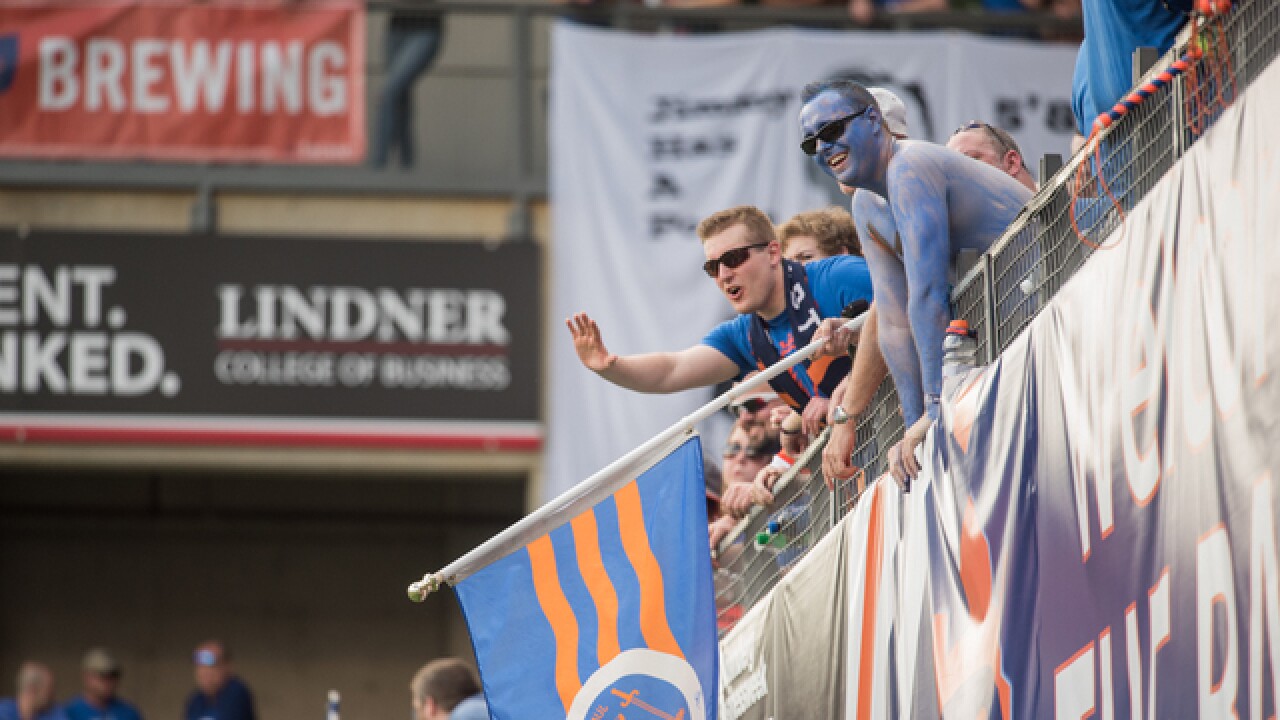 CINCINNATI -- When FC Cincinnati originally earned its acceptance into Major League Soccer last May, league commissioner Don Garber said he was convinced the club belonged after experiencing in person the atmosphere created by a sold-out crowd for the U.S. Open Cup semifinal in August 2017.

The 30,000-plus fans at Nippert Stadium created an MLS-caliber environment, and large crowds had become the norm for the club, so Garber had little doubt FCC could pull off a quick transition going from the United Soccer League to the top division.

Starting Monday, crews will work to transform the field from a football stadium to a soccer pitch. Workers will paint the field Monday afternoon, and by Tuesday night, Nippert Stadium will be ready for the club’s inaugural MLS home game Sunday against the Portland Timbers.

Fans will find out that, other than a higher quality product on the field, the gameday experience isn’t much different from FCC’s three years in the USL.

“Our focus is the same as it’s always been – we want to provide our fans, and of course the players too, with the best experience possible at our matches, and we’ve got that down pretty good now,” FCC President and General Manager Jeff Berding said.

The biggest changes for fans will come in the hit to their wallets, as prices went up for individual tickets and season packages, much of the merchandise and some concessions items – all of which were expected with the jump to the major leagues.

In some cases, ticket prices have doubled in cost compared to last year. Four new price levels were added, largely on the lower end of the scale, but the cheapest seats (general admission) jumped from $99 to $199. Single-game prices now range from $15 to $45 for non-club or premium seats. Fans previously could purchase seats for as low as $5-10. Parking in campus garages went up from $10 to $15 on gamedays.

As of Friday afternoon, general admission tickets were unavailable (though some occasionally pop up through the ticket exchange program) and the club was closing in on 30,000 sold. Season ticket sales crossed the 20,000 threshold prior to the opening game at Seattle on March 2.

Pricing for concessions was not available but FC Cincinnati planned to publish a story on its website (www.fccincinnati.com) Monday with more details on stadium information. According to information already listed on the site, concessions will include many of the same options, such as LaRosa’s Pizzeria, burgers, nachos, popcorn, Skyline (which was a late addition last year) and now Frisch’s Big Boy.

Merchandise will still be available at kiosks throughout the stadium, including three on the main concourse, one in the Club West Pavilion third floor and in the West Pavilion fourth-floor suites, as well as outside Nippert on Sheakley Lawn.

Outside of the expenses that increase with the jump to MLS, there will be a few other less noticeable changes to fans. Vice president of operations Dan McNally said the security staff will double on gamedays, and at entrances, there will be a double bike rack system, rather than the single bike racks that previously helped corral fans to the ticket takers and bag checkers. Security will be using handheld metal detector wands.

“That is part of the MLS standards, but it’s also internal as we sell more tickets and these events get bigger, we naturally evolve,” McNally said.

Reserved seating for visiting supporters will no longer be in Section 101, caddy corner to the Bailey, but moved to the opposite corner Sections 214 and 216 in the east upper deck.

McNally said MLS was impressed with the Cincinnati supporters groups and regards them as organized and easy to work with, so he doesn’t anticipate many changes with procedures for The Bailey’s pre-game march and chants.

Home fans will get a chance to more easily taunt the visiting team thanks to work done to the rooms underneath The Bailey. The former home locker room now becomes the visiting locker room, which allows them to more easily get to and from the bus in the tunnel behind that corner of the stadium, and the former players’ lounge has been converted to FCC’s locker room.

Visitors previously had to go up the stairs to the Lindner Center, which was a one-minute walk from the field.

“We will no longer need the club space, or the team lounge, because now we are out at Milford (for most training sessions),” Berding said.

The locker room project was one of the two main updates that impact the players, the other being the most welcome change for them: New turf.

Gone are the endzone panels that took hours to replace in the changeover from football field to soccer pitch and that caused noticeable seams that players complained about impacting play. The Motz Group installed its 56-ounce, 2.5-inch SportgrassPro Bolt monofilament system turf, which has rubber and sand infill and appears more like real grass.

“Basically once we knew we were going to be in MLS and that was confirmed, we were under the knowledge we had to change the quality of the turf,” McNally said. “The old turf had been through three seasons of football and soccer and that’s a lot of wear and tear. It was time in a higher standard of league to improve the quality of the surface.”

The club began discussions with the university about the type of turf that would work best for both Major League Soccer and Division I football, and the work began in late November.

Pioneer Company will continue to handle the washing and re-painting to convert from football to soccer and back to football, but now it will be necessary to paint the entire endzone sections with the University of Cincinnati’s colors and logos instead of just changing the lines.

“We felt the panel system with the endzones installed for the 2016 season, it just led to a number of situations that made the whole switch from football to soccer challenging,” McNally said. “The No. 1 challenge was the time it took to transition. From soccer to football, it was like a 15- to 16-hour process. The general consensus was to do all green turf, no panels and we will paint and wash, back and forth.”

The turf is the exact same as what was installed at Mercy Health Training Center, where the team has been training since early February. Coach Alan Koch said the surface is much better for the players.

McNally said the locker room and turf projects were completed within the last two weeks, and Nippert is all set for the home opener.

“We upgraded the facility to meet Major League Soccer standards and we’re very happy with the work being done,” McNally said. “We set the gold standard for stadium operations in USL and now what we have to do is rise to increased standards of Major League Soccer, but I feel we are well on our way to reaching those standards and I’m confident we will provide a great experience for players and fans.”