Reds hold on to beat Rockies 4-3 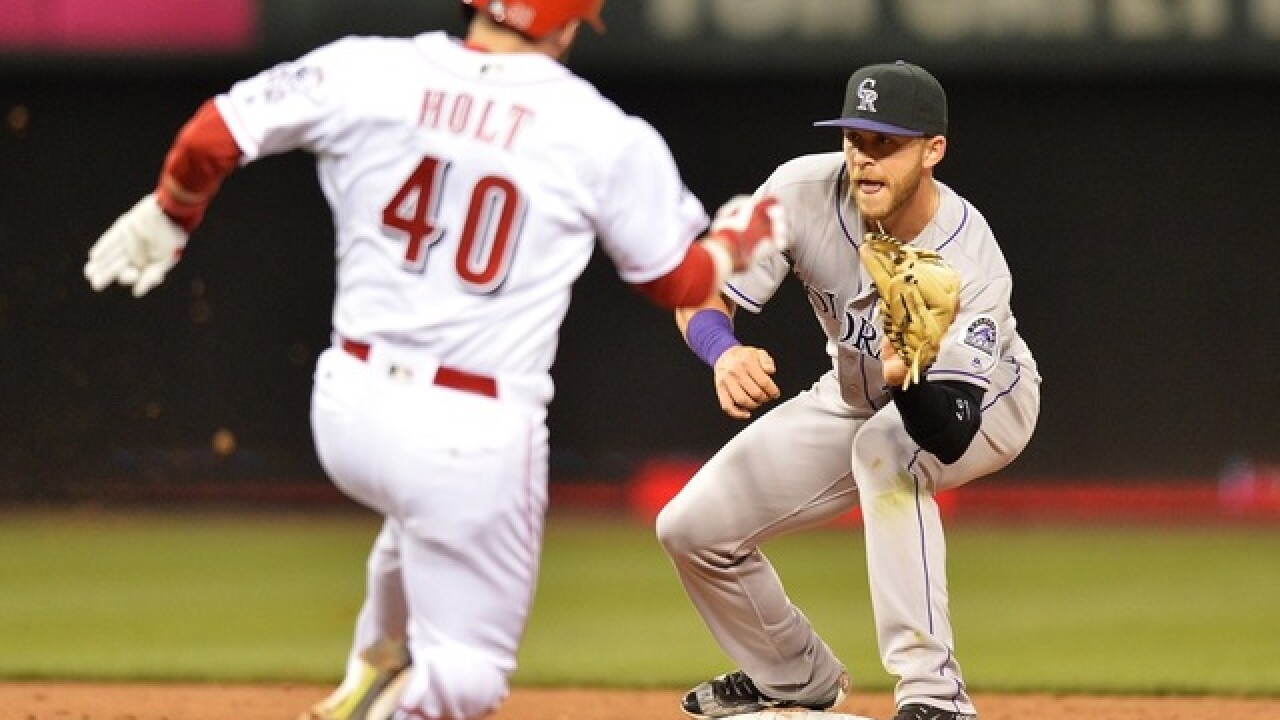 Jamie Sabau/Getty Images
<p>CINCINNATI, OH - APRIL 19: Trevor Story #27 of the Colorado Rockies takes the throw for the force out of Tyler Holt #40 of the Cincinnati Reds at second base in the sixth inning at Great American Ball Park on April 19, 2016 in Cincinnati, Ohio. Cincinnati defeated Colorado 4-3.</p>

CINCINNATI -- Sensing that Jorge De La Rosa wasn't paying attention, the Reds were off and running.

Jay Bruce had two of the Reds' five steals in the second inning off De La Rosa - their biggest inning on the bases in roughly a century - and Cincinnati held on for a 4-3 victory over the Colorado Rockies on Tuesday night.

Brandon Phillips had four hits, and Billy Hamilton doubled home two runs during Cincinnati's four-run second inning off De La Rosa (1-2). The inning included those record five steals off the left-hander's slow move to the plate. The Reds hadn't stolen so many bases during an inning since at least the 1920s, per information provided by the teams from the Elias Sports Bureau.

De La Rosa was having trouble getting his fastball to go where he wanted, so he started throwing more change-ups and ignoring runners, who took off at every opportunity. It was the most steals that the Rockies had ever allowed in an inning.

"I lost my concentration," De La Rosa said. "I wasn't paying attention to the runners. I have to do a better job than that."

Rookie Robert Stephenson (2-0) got his second win as an injury fill-in, called up from Triple-A earlier in the day because scheduled starter Alfredo Simon has a strained biceps.

Stephenson was the Reds' top draft pick in 2011 and made his big league debut in the third game of the season, getting a win over Philadelphia as an injury fill-in that time, too. The last Reds pitcher to win his first two starts in the majors was Larry Luebbers in 1993.

"It eased the nerves a little bit knowing that I've been here before and I belong here," said Stephenson, who lasted five innings against the Phillies. "Just had a lot more confidence."

The right-hander gave up three hits in seven innings - the longest outing by a Reds starter this season - and struck out three.

"He was terrific," manager Bryan Price said. "He's our first seven innings pitched. He made the pitches he needed to make, he controlled the running game and he fielded his position. He did the things you have to do to stay here. He did a good job of not making too much of the situation."

Phillips singled, doubled and tripled in his first three at-bats. With a chance to hit for the cycle, he singled up the middle in the eighth inning. Zack Cozart extended his hitting streak to 10 games with an RBI single.

De La Rosa retired only six of the 14 batters he faced, leaving after failing to retire the first two batters in the third inning. It was the seventh time the lefty has gone two or fewer innings, the first since his opening start last season.

The Reds sent reliever Jumbo Diaz to Triple-A Louisville to open a roster spot for Stephenson. Diaz gave up a three-run homer during a 5-1 loss to the Rockies on Monday night, the third homer he allowed this season.

The Rockies' previous record for stolen bases allowed in an inning was four - also by the Reds on May 16, 1993, in the bottom of the first inning, per information provided by the Rockies from Elias. In addition to Bruce's two steals, Tyler Holt, Hamilton and Eugenio Suarez also swiped bases in the second inning against De La Rosa and rookie catcher Tony Wolters.

Rockies: 2B DJ LeMahieu was back in the lineup. He missed the series opener because of tightness in his groin. He went 0 for 4.

Reds: Simon got a shot of anti-inflammatories in the arm. He's hoping to start Sunday in the final game of a series against the Chicago Cubs at Great American Ball Park.

Rockies: RHP Chad Bettis (2-0) makes his first career appearance against the Reds. He has won each of his last two starts, allowing a total of one earned run against the Padres and Cubs.

Reds: RHP Raisel Iglesias (1-1) makes his first career appearance against the Rockies. He lasted a season-low five innings during an 8-1 loss at Wrigley Field on Thursday.