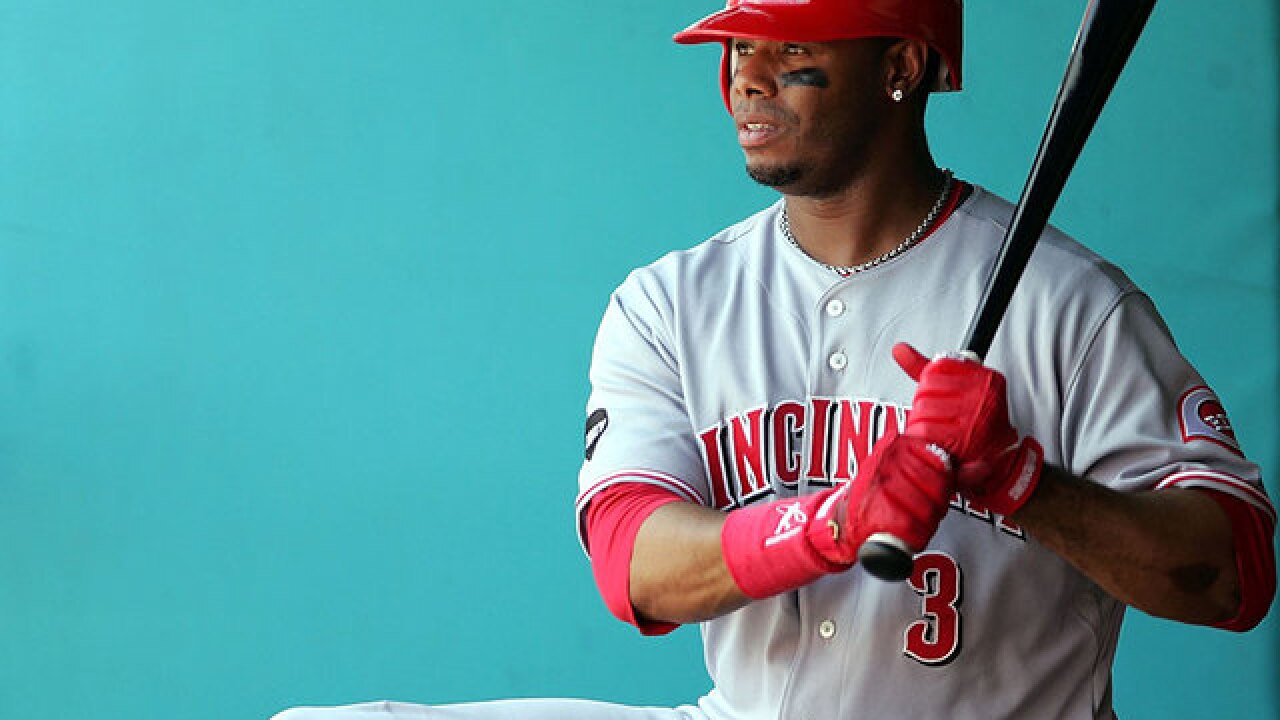 Marc Serota | Getty Images
<p>Ken Griffey Jr. #3 of the Cincinnati Reds waits on deck during a game against the Florida Marlins on June 8, 2008 at Dolphin Stadium in Miami, Florida.</p>

EDITOR'S NOTE: WCPO is looking back on Ken Griffey Jr.'s life growing up in Cincinnati, stunning success and Hall of Fame career. See all of our coverage at WCPO.com/griffey. Watch Sunday's induction ceremony at 1:30 p.m. ET on MLB Network or www.baseballhall.org .

COOPERSTOWN, NY — A couple of weeks after entering the National Baseball Hall of Fame , Ken Griifey Jr. will be honored in Seattle. The Mariners are putting on a Junior Weekend . There’s a charity event on Friday, and his number will retired on Saturday.

The Reds don’t have anything scheduled to honor Griffey. Griffey played eight and a half seasons with his hometown team.

The Reds aren’t ignoring Griffey’s induction. They gave away a dual Griffey bobblehead, which featured him in a Reds and a Mariners uniform, May 21. They played in uniforms from the Griffey era on Wednesday. A contingent from Reds ownership and the organization also will be in Cooperstown for his induction .

Griffey was invited to be in Cincinnati for the bobblehead night, and he considered coming for Pete Rose’s weekend. He didn’t make either because of scheduling conflicts.

“He is not scheduled to come in at this point,” said Karen Forgus, the Reds senior vice president of business operations.

Something still could happen. “I’m sure he’s open-minded to whatever they want to do,” Goldberg said.

Griffey’s only public appearance at Great American Ball Park since he was traded in 2008 was for his induction in the Reds Hall of Fame in 2014.

Only nine of the Reds in the national Hall of Fame played the majority of their careers in Cincinnati. Of them, Frank Robinson, Johnny Bench, Joe Morgan and Barry Larkin have had their numbers retired. That’s unlikely to happen in Griffey’s case. His number in Seattle is what got him to the Hall, and he wore two different numbers — 30 from 2000 to 2005 and 3 from 2006 to 2008 — with the Reds.

“You only have so many numbers,” Goldberg said. “I know he switched ... but the combination of him and Senior wearing 30. I don’t get mad. When I see a new player wearing that number, I kind of laugh.”

Kyle Waldrop is currently wearing 30. It wasn’t lost on him, especially in the throwbacks.

Again, something still could happen to honor Griffey. “The Reds kind of deferred and let the Mariners do their thing first,” Goldberg said.

The thing about Griffey is, he stays away from the game. His children are his priority. If Trey, Taryn or Tevin has a game, Griffey doesn’t missed it. Trey plays football at Arizona State (and the Mariners drafted him last month, in case he wants to go into the family business). Taryn plays basketball there.

“Anything people think of Junior, true or not true, he’s a huge family man, a mama’s boy,” Goldberg said.