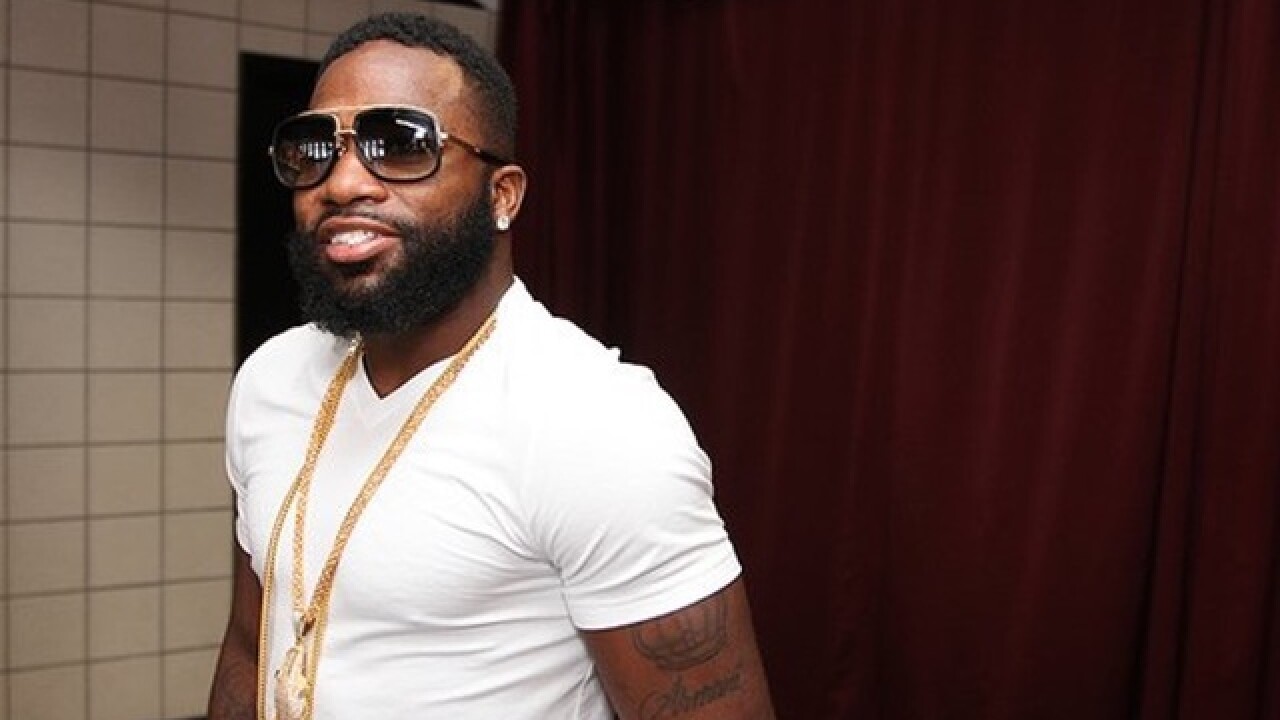 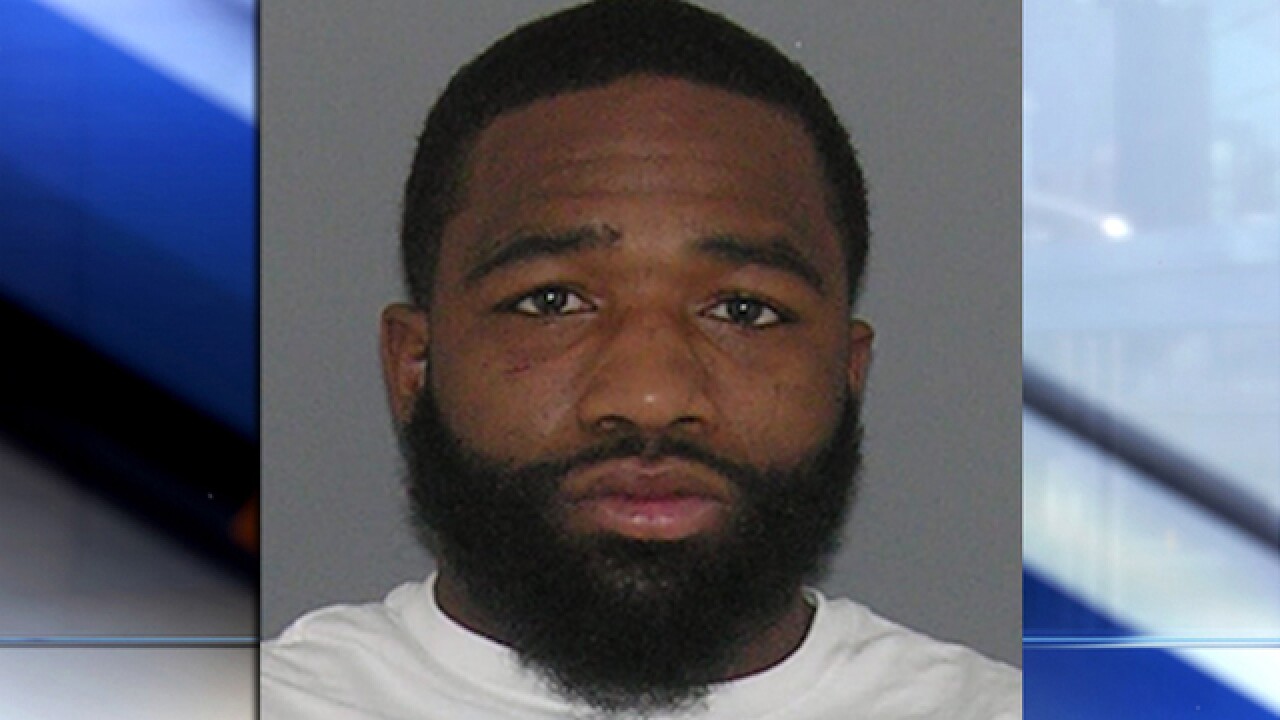 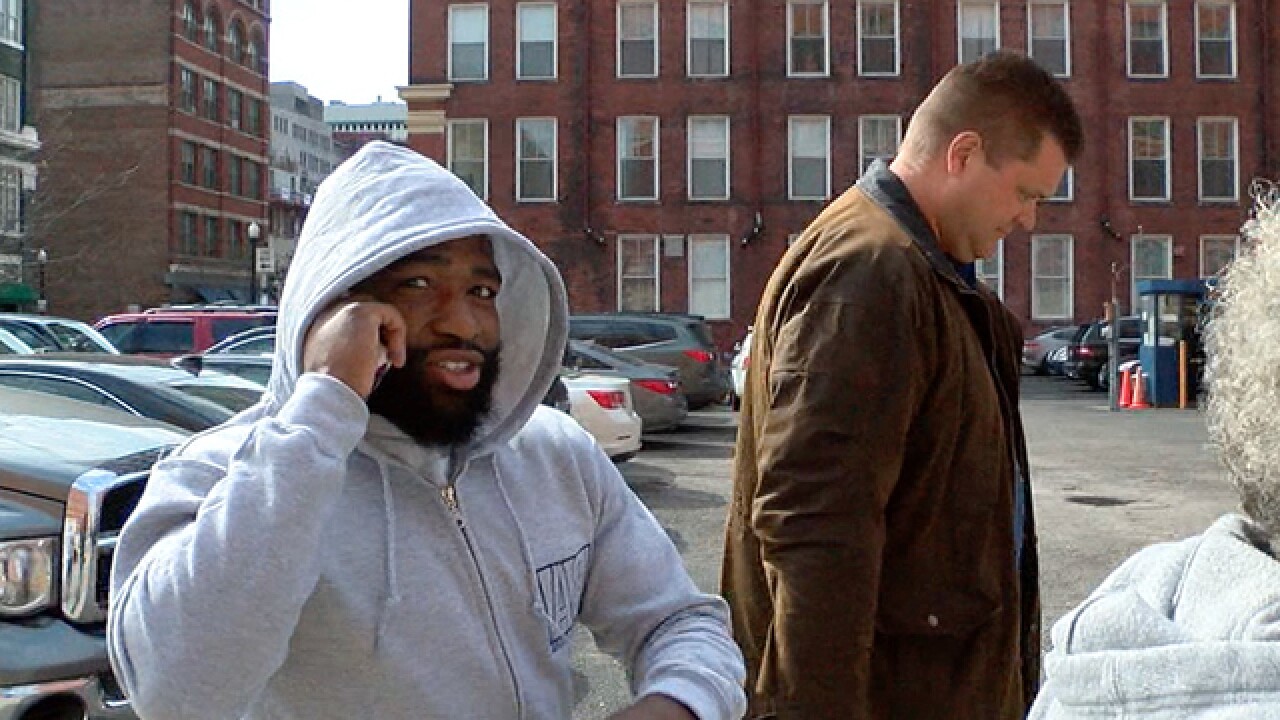 CINCINNATI -- Why does Adrien Broner want you to vote for Donald Trump?

Cincinnati's four-time world champion boxer turned himself in Monday morning and signed a $100,000 appearance bond, promising he will show up in court at 9 a.m. Tuesday to face felony assault and aggravated robbery charges. He can stay out of jail if he pays $10,000 (10 percent). If Broner doesn't show, he will owe a hundred grand and have another warrant out for him.

WCPO captured video of the 26-year-old  Broner after leaving court with his attorney Will Welsh. Broner's only comment for our camera: "Vote for Donald Trump."

Court documents obtained by WCPO say police have video and witnesses that confirm the accusations against Broner, as described in the complaint:

"Broner struck [Christopher] Carson in the face with a closed fist causing injury. Broner then retrieved a handgun from his vehicle, approached the victim, demanded money, then struck Carson in the face with a closed first a second time, this time causing Carson to be rendered unconscious. Broner was then observed taking money out of Carson's pockets while he was unconscious before fleeing the scene."

Broner brandished the handgun, the complaint says. He was ordered to stay away from Carson and have no contact with him.

After leaving  court, Broner - covered head to toe in a hooded gray sweatsuit with his AB insignia -  talked on his cell phone as he walked with his mother and Welsh east on Ninth Street to Welsh''s office. When the Broners left, three men escorted them to a white Suburban parked on the street and they drove off. Broner posted this message: "They let me out, y'all," with a picture of him and his mother.

A photo posted by Adrien Broner (@adrienbroner) on

We couldn't find any evidence that Broner is really in Trump's corner in the presidential race, but the outspoken fighter mentioned the billionaire Republican candidate in a news conference last week before his Friday night fight.

"People feel that Donald Trump shouldn't be president, but the way it's looking, he might be. Looks can be deceiving," Broner said.

Trump's brashness, money and connections apparently made an impression on boxing greats Manny Pacquiao and Oscar De La Hoya. Pacquiao, a congressman in the Philippines who is running for senator,  said Trump invited him to be a judge for last year’s Miss Universe pageant.

“He’s a friendly guy,” Pacquiao said.  “He’s always direct to the point. He speaks not like a politician.”

De La Hoya, now a promoter, told TMZ that Trump gave him the idea to pair Canelo Alvarez and Amir Khan in an upcoming superfight because they both come from backgrounds that Trump has targeted in his campaign. De La Hoya also swears that Trump is only running to throw the Republicans in chaos and ensure that Hillary Clinton gets elected.

A West Chester Township man claims Broner beat him up in the parking lot of Madison Bowl after the boxer lost thousands of dollars to him on bets in head-to-head bowling matches. Christopher Carson claims Broner pointed a gun at him, knocked him unconscious and stole $12,000 in cash from him.

In a lawsuit, Carson accused Broner of assault, battery, civil theft and intentional infliction of emotional distress. Carson said he'd first met Broner about two years ago, and they'd sometimes take part in "team bowling" session at Madison Bowl. When they were bowling Jan. 20, the lawsuit states, the men wagered between $500 and $2,000 on some head-to-head games. Carson alleged he won about $8,000 from Broner in cash, and another $6,000 from him on credit.

In the early-morning hours of Jan. 21, Broner tried to get Carson to bet $6,000 on one last match, the lawsuit states. Broner got angry and left when Carson only agreed to a maximum of $3,000.

Carson alleged that Broner then beat him up in the parking lot when he went outside, threatened him with a handgun and eventually knocked him unconscious.

In the lawsuit, filed Feb. 5, Carson is seeking compensatory damages in excess of $250,000, as well as damages for pain, distress and mental anguish, punitive damages and attorney's fees.

Broner's Friday TKO of Ashley Theophane, a fighter promoted by Floyd Mayweather, leaves the WBA super lightweight title vacant. The bout was supposed to be Broner's first defense of the belt, but he weighed in at four-tenths of a pound over the 140-pound limit Thursday and was stripped of the title.

Broner challenged Mayweather after Friday's bout and said he would turn himself in to authorities on Monday.

"As you know, I've been going through a lot and for me to come in here and bottle everything up and do what I did," Broner said after the win on Friday. "I want to give myself a pat on the back."