Majority are women- and minority-owned businesses 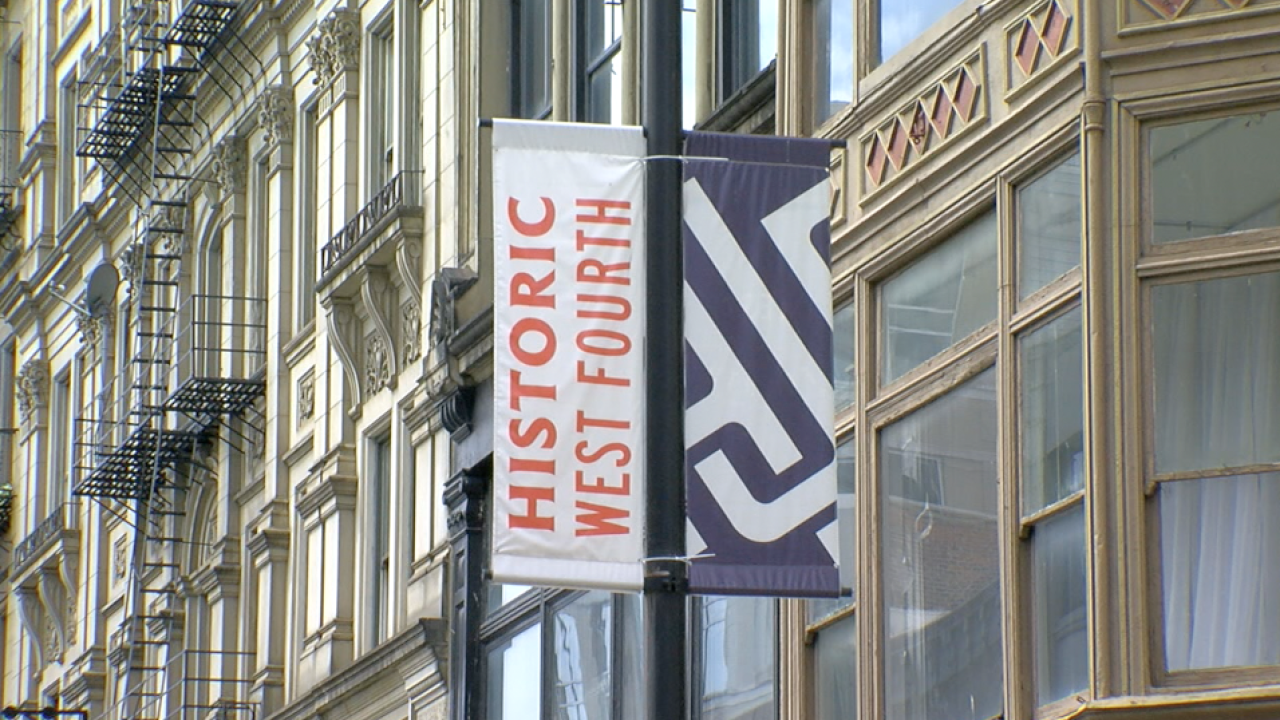 Copyright 2020 Scripps Media, Inc. All rights reserved. This material may not be published, broadcast, rewritten, or redistributed.
Eric Clajus
Banners are up along a stretch of West Fourth Street that will welcome nearly one dozen new small businesses by the end of 2020. 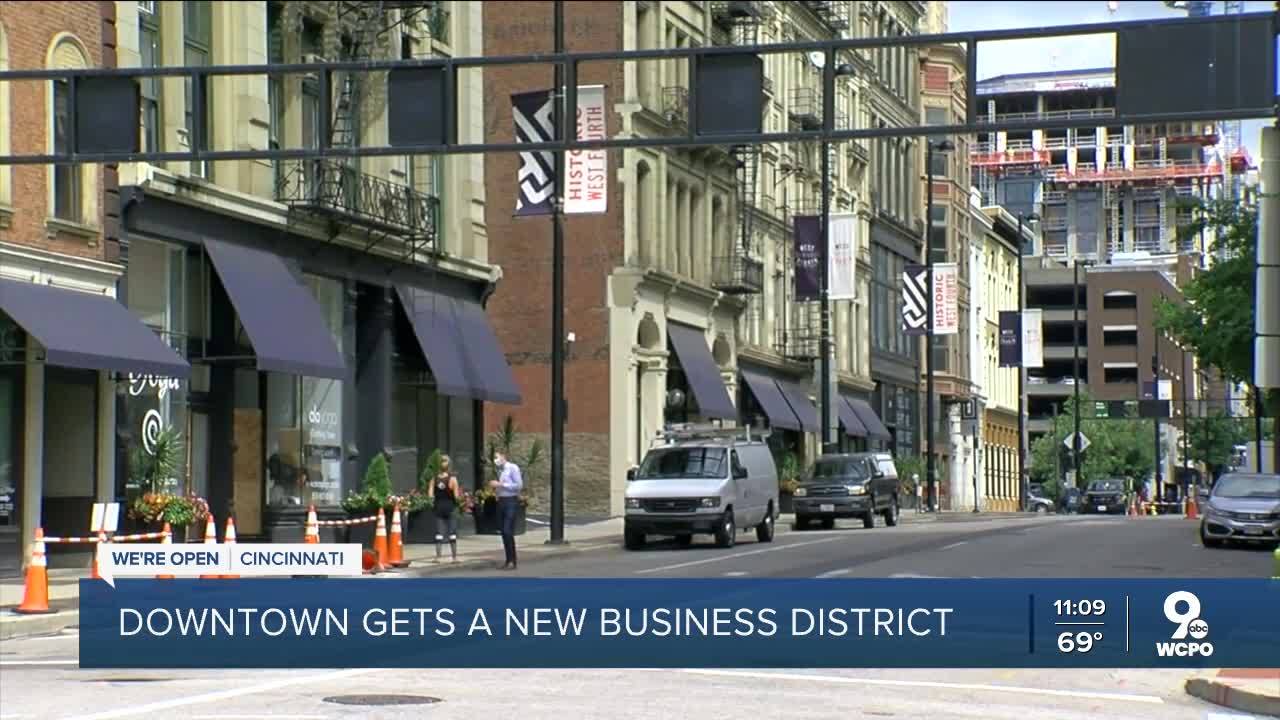 CINCINNATI — Despite the pandemic's economic effects, one corner of downtown Cincinnati is experiencing a community-led revival in 2020.

West Fourth Street is a maze of construction, steel plates, scaffolding and orange cones. Investments from large developers and an influx of small businesses, many of them owned by women and minorities, are reshaping West Fourth Street into a bustling retail district.

Investment along the street is nearing $400 million from a handful of large projects.

The iconic PNC Tower, formerly the Central Trust Tower, will become a mixed-use expansion of City Club Apartments, with more than 260 apartments as part of the historic renovation of the mostly-vacant tower. Around ten percent of the apartments will be considered affordable housing. The project is estimated at $103 million.

There's the long-awaited $116 million mixed-use development growing at Fourth and Race Streets, which will feature 264 apartments on top of a 584-space parking garage and 22,000 square feet of commercial real estate space. The project is a partnership between 3CDC and Indianapolis-based developer Flaherty and Collins.

Another developer, The Loring Group, is working to reinvigorate the westernmost two blocks of what it calls Historic West Fourth Street after purchasing the Fourth and Plum apartment complex. The group says it has roughly $150 million invested in the neighborhood now, with a focus on renovated apartment buildings and new small businesses.

"It really was, 'How do you work with the community to make sure you're not kicking people out (and) you're not being a bad neighbor?'" said Andrew Naab, The Loring Group's director of commercial development, when describing the company's approach. "I think that's where we heard people say, 'We want retail down here. We don't want bars and nightlife that Over-the-Rhine provides. If we wanted that, we'd move to Over-the-Rhine.'"

Two of those community-driven, Loring Group-backed businesses opened on Saturday.

"Bring it. Let's see what we can do," Michael Brown, co-founder of Rebel Mettle Brewery, said. "Essentially, we have turned a parking garage into a brewery. We've got all of Cincinnati right here, and it's an awesome place to come celebrate and have fun."

The brewery started in 2015 when co-founders and friends Greg Goeke and Duane Donohoo began home-brewing. Now, the trio has a physical space between Paul Brown Stadium and the Duke Energy Convention Center.

Brown, an Air Force veteran, called the opening a dream.

"We thought, 'What could we do together that we could do for the rest of our lives, come to work with a smile on our face, and work together?' And, really, the brewery was at the top of the list," he said.

Other business owners are similarly starry-eyed when discussing the possibilities.

"It literally gives me chills," said yoga studio owner Nina DeMers of the area's rapid development. "I have watched this whole thing develop."

DeMers said she moved to West Fourth last year because she was drawn to the energy and The Loring Group's vision for the district's rebirth.

"I can't put into words how excited I am that it's actually now happening," she said.

The Historic West Fourth Street district has had a slew of recent business announcements with fast-approaching openings.

"We're bringing in businesses that people knew, that had proof of concept," Naab, The Loring Group's development director, said.

Those include Covington-based women's clothing and accessories store Handzy Shop + Studio and children's store Gumdrop, both set to open in the fall. Deeper Roots Coffee will soon open its third local cafe. Listermann Brewing Company has plans for a second location in the district, too.

Sister shops Forage and Koko will open their first side-by-side storefronts in the district in October.

LET’S KEEP THE ANNOUNCEMENTS COMING! • We are so excited to share that @forageplants + sister-store @kokotheshop will be joining the #historicwestfourth district in Fall 2020! Forage is more than an interior plant store; it is a community, created by some power-house women, that has locations in multiple markets across the country. Koko is a sustainable living store + refilling station that began as a solution to a problem: a lack of convenient resources to live a more eco-friendly lifestyle! • Please join us in welcoming @forageplants + @kokotheshop to #historicwestfourth in @downtowncincy ! • #downtowncincy #cincinnati #shoplocal #shopsmall #shopsmallbusiness #womenempowerment #womeninbusiness #womenownedbusiness #shopping #shoppingonline #plants #plantsofinstagram #sustainability #sustainableliving #sustainable #retail #urban #shopcincy

Forage plant and home goods stores already exist in Lexington, Louisville, Denver, and Columbus. Co-owner Adria Hall said it made sense to eye Cincinnati as a next step, and their focus narrowed to West Fourth Street when Naab reached out to them on Instagram.

"We are so drawn to the history of it and the way that they are sort of rebuilding it with the community in mind because that's something that's really important to us," she said.

Koko is a newer concept from Hall and business partner Jamie Fairman. It focuses on sustainable living and offers a refillery — that's exactly what it sounds like — for toiletries and cleaning supplies.

Hall said the area's sense of community and the Loring Group's outreach made the decision to open a store there easy.

"It's not just gentrifying and rebuilding, but taking survey of what the people who live there want and making sure they're included," she said.